It looks like Autodesk Fusion 360 is adding V-Carving functionality to the software in Novembers software update:

Want to know more about what is coming in November's update? Here is a preview on the changes for the up coming release.There are changes coming to Form,...

It’s free for hobbyists, so with added V-Carve functionality, it may be a good alternative for those who can’t drop the $ on more software.

Based on all your feedback and popular demand, we’ve added the ability to engrave in the CAM workspace. Also known as “V-Carve”, it uses a point tool as a variable diameter tool to engrave detailed geometry such as text, logos, sketch geometry and vector art. Once you have engraving toolpaths set, you can simulate it just any other toolpaths you create within the CAM workspace.

I’ve been watching that with a fair bit of enthusiasm! If they can get V-carving to work as well as V-Carve Desktop? It’ll be pretty much the perfect router program, I think. Only thing left to make it impossibly good would be a built-in sender!

That’s fantastic! How exciting is that?

Particularly for my current projects, which involve both machining from a model AND V-carving. Being able to run all three programs from the same model and zero will save me an absurd pile of time re-zeroing between parts!

I think you have nailed it Dan.
Having a single tool that is capable of multiple tasks based on a single file will simplify the entire process. I believe this will also make troubleshooting and manipulation of parts involving multiple steps a much easier proposition going forward. An additional benefit for users that are new to the world of 3D modeling is that since they will now be able to use a single tool for multiple operations their proficiency will increase at a much faster rate.

Will F360 be able to project the Vcarve lettering down to a curved surface?

@AllenMassey - I know that Fusion projects lettering onto a curved surface. But until the VCarve feature is out, I couldn’t say whether there will be limits on creating VCarve tool paths on curved surfaces. I tend to think the feature will allow for this…

Fusion 360 is Powerful and Fantastic. Being able to create Parameters and Assign your Dimensions then change on the Fly is a great Feature. I still Love the Simplicity of V-Carve Pro, but for more involved Projects Fusion 360 is a Great Program. These 2 tools are what I use and Love; Fusion 360 and V-Carve Pro.

More or less the way I’ve been doing my work as well. I use Fusion for all of my modeling and CAM work on mechanical parts, then V-Carve for text. Even if Fusion does support V-Carving as well as V-Carve, I think I’ll still probably use V-Carve for signs, just because it’s so easy to use!

For mechanical components, though, or parts with both designed features AND text, the lack of ability to edit with CAD tools really makes V-carve fall down by comparison to Fusion. No surprise, given the relative design intent of the two programs. I see myself continuing to use them both extensively!

Yes a built in sender and machine control with the ability to adjust feed rates!!!

Been playing with Fusion 360 for a couple weeks, and this morning finally installed UGCS and tried a tool path I created in its CAM workspace.

I’m using an old dull countersink bit, so the cut quality is pretty bad, and I think I gave Fusion 360 the wrong bit angle, but I must say generating the tool path was easy and it worked just fine on the old X-Carve (having taken the precaution to set my G28 position). 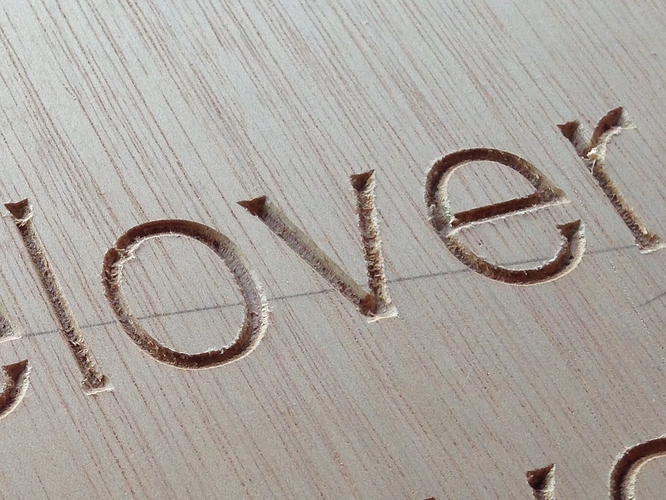 Has anyone figured out a way to do inlays with this? Basically make the inverse of the vcut engraving pocket.

I am thinking that an outside bevel cut of the same shape might work? Any thoughts? Has anyone done this?

V-Carve has the functionality to do V-inlays automatically, so it’s definitely do-able…

hi i am very new in to cnc… if you were to help me choose between the two, which software would i be better off?

Vcarve desktop = $350… looks awesome and fairly easy to use. Limited size of projects.

If you do get VCarve Desktop (something I am looking at), you can upgrade to pro for the difference in the price. So if you are sat on the fence between pro and desktop, and get desktop, you can always upgrade without spending any more than you would have initially.

I am new to CNC (only got my Carvey about two weeks ago).
I have had pretty good success with Fusion 360. (have been using it for some time with 3d printing.

Doing V-carving is super simple;
1/ create a sketch in fusion with the writing / font/ size you want.
2/ select cam mode in fusion
3/ create a setup (with the stock you plan to use), select a v-carve bit. (ensure orgin point is correct)
4/ select the 2d engrave function, select the writing to be cut
5/ the tool path is automatically created, you can preview it under simulate
6/ generate the g-code (post process)
7/ import g-code into easel.
8/ carve 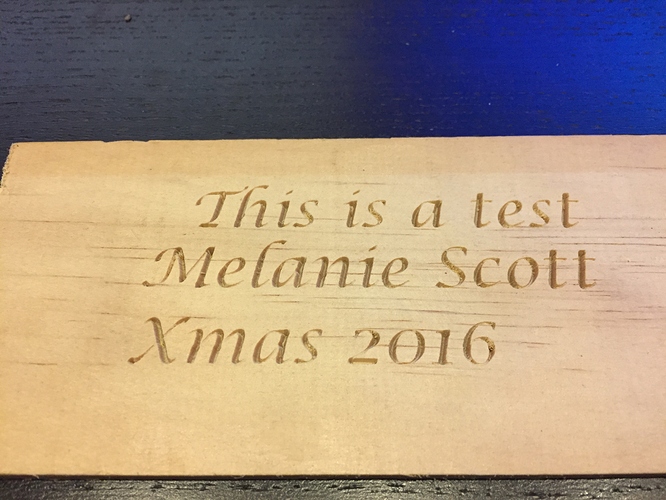 I’m trying to replication what ScottA did. I need more details on the step 4, “select the 2d engrave function, select the writing to be cut”. When I complete the step a warning appears on the setup stating the toolpath is empty. The design consists of a single sketch with 5 text boxes on the same xy plane. For the 2D Engrave dialog I selected a tool, the geometry, and the rest defaults. I’m not sure how to select the geometry which may be the problem. I’m selecting a line in each text box to create a single Chain.
Thanks in advance!