Hi guys! I want to get into some more advanced carving and do some inlays with v carving. I have recently acquired a v craving bit set. One of the big advantages of v carving is you can get square corners with a round bit. MTMwood does a lot of this type of inlay with with v carving and inlaying a mating piece like what is seen in this video: https://youtu.be/sJ-G5ttYmeg?t=1m39s

Does this technique have a name? Or is it just v carving inlay? Also, is there any software for the Mac that is capable of this? And do you have any resources where I can learn more about this?

Check this link from Vectric out. You will probably need to adapt a bit to accomodate to the software that you are running but it should give you some insight into the process.

Once you have the inlay glued in to the female base, can the X-carve be used to remove the excess wood from the male inlay rather than using a bandsaw or planer? Would there be chip-out? from thinn parts of the inlay?

I think you could definitely do that with the right bit. Although using a bandsaw is a much quicker and more efficient way of doing this. You could also sand down that top piece with a belt sander as long as it’s not too thick.

That video explains it well! Unfortunately V Carve Pro is Windows only.

I should have been a bit more clear, my suggstion was to show the concepts and adapt them to whatever cad/gcode program he is running. Not to suggest that he just use the vectric product.

I think there’s some confusion here between “Vectric V-Carve”, and carving with v-shaped bits like this:

I’ve never done inlays with a v-shaped bit, it seems like that would only work if you were using a 90 degree bit? Otherwise the angle on the positive/negative shapes doesn’t seem like it would line up.

After joining my positive and negative pieces together, I’ve had very good success using the CNC machine to remove the excess from my inlays, so it’s only needed a quick sanding to finish it up.

V-carving is a technique as well as the name of the software by Vectric. V-carving is more than just cutting with a v-shaped bit. The machine will raise the bit as it reaches the corners allowing you to carve art work with corners that are smaller than the diameter of your bit. I believe this is where the term 2.5 D comes in. This also takes special software like Vectric V-Carve.

Im going to attempt this with v carve desktop. Possible? And you suggest 60deg or 90deg v bit?

I have done it with a 60 degree bit, in fact, I do most of my v carving and inlay with a 60.
As long as the same angle bit is used for the pocket and the inlay, things line up nicely. The pocket should be a tad deeper than the inlay to allow for glue squeeze and if there is any bottom of pocket irregularities.

Trying to do a text inlay. Text height is less than 1" high, and the lettering is about .09" thick. I tried the VCarve method from the Vectric forum post. My inlay piece still seems too wide for the pocket. How are you setting yours up?

Using the 60 degree Vbit from Inventables. I have a nice 90 degree, but with the narrow text width, It wouldn’t carve very deep.

Makes sense. Think it’s worth trying with the 90 degree? Or will it be too shallow with text that size. I have some onsrud 30 degree with .005" tips.
The Inventables 60 degree does seem to have a bit of a flat.

If by stating that the inlay is too wide for thew pocket do you imply that the male or positive fill in piece sits proud of the surface when mated with the pocket or female piece? Or, does it not even go into the pocket?

If it is the former, the inlay “backer” need not lay dierectly on the surface of the pocketed piece as this will ensure that the walls of both sides will match tightly together. then the positive’ backer is cut,sanded or planed away revealing the inlay
If i is the latter, increase the depth of cut for the positive piece. the action of the v bit makes the walls of the lettering or whatever tapered and as a result the very top is narrower. the deeper the cut, the narrower the top surface…

I remember reading that one and F-Engrave might be the way to go in the future. I’m trying to finish a Christmas present and didn’t want to learn a new software this week.

Your point about the Flat makes sense, Looks like I could cheat and raise the bit Zero point to account for the flat. I may give that a try.

I have 2 photos that show an issue where my bit seems to be cutting too far into the inlay (raised) piece. The pre assembly, and post. I wanted to see how bad it was after glue up. Everything looks good in VCarve. 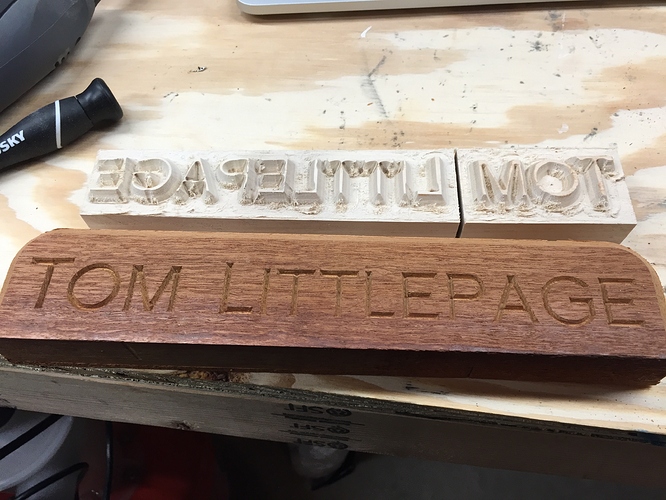 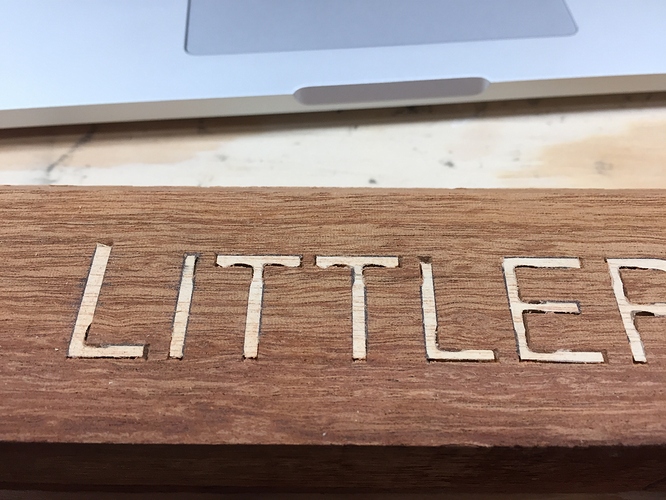 I skipped the flat area clearance and just set the stepover larger for the clearing with the V bit. Was a suggestion in the PDF from the Vectric forum. The clearance between inlay and pocket left plenty of room for cutoff.

The letters SHOULD be the same shape according to the computer, and thats where my concern is coming from. It’s a copy and mirror in VCarve. The program will let me set a flat depth on an engraving bit, but not a V-Bit.

I will try that. I just did a demo cut with my 90deg because it has a nice sharp point. The inlay turned out much cleaner, and the inlay letters look more like the pocket lettering. I am still a little concerned with how shallow the pocket is. Gluing it up now with CA adhesive.
(I know it’s the same wood type, so the inlay itself will probably look like poo as far as detail goes.) 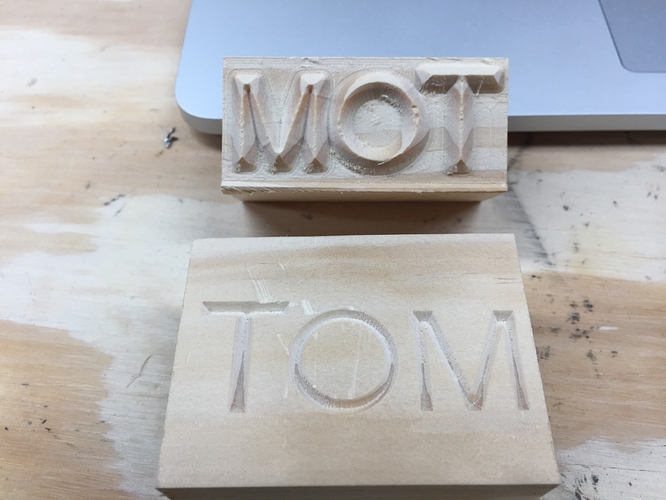 And here is the result of the test with the 90 degree pointy bit.
No huge gaps between the inlay and the pocket.
“Flat Depth” for the inlay was set to the max depth of my pocket, and the “Start Depth” was also set the same instead of Zero. Total depth of cut = 2x Depth of original pocket. 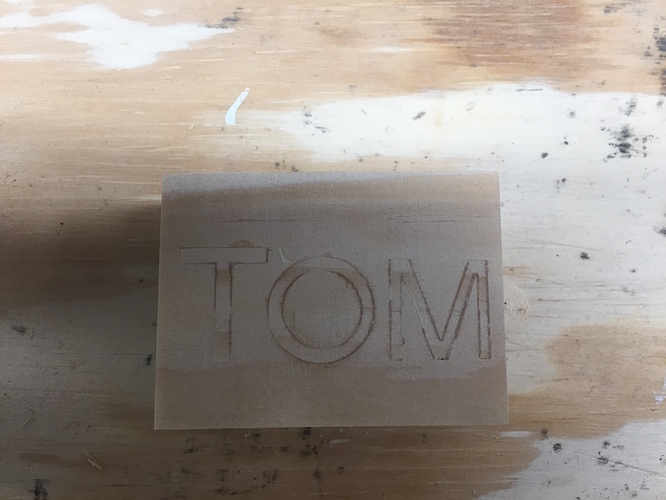 Thank you @PhilJohnson and @RobertCanning! Switching to my pointy 90degree worked like a champ!

I will set up the 60 degree as an engraving bit with a flat and see what it does after Christmas. Excellent help guys!

I’ll share a photo after the present gets unwrapped.