Obviously need a good downcut bit, given the original cut. Also my first airbrushing job, so I don’t think I screwed it up too badly. It’s funny when you make real life clip art - the pictures you take of it look fake 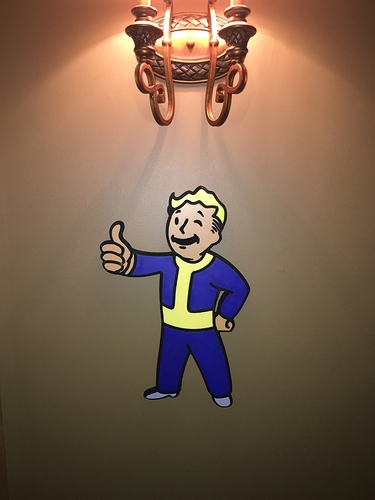 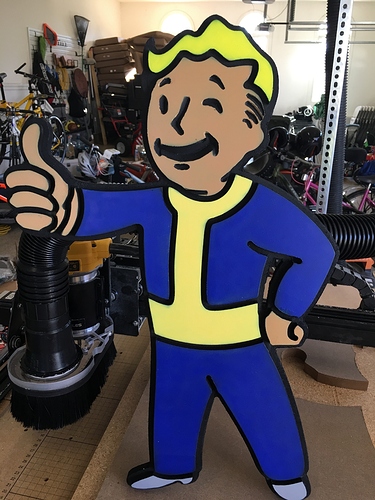 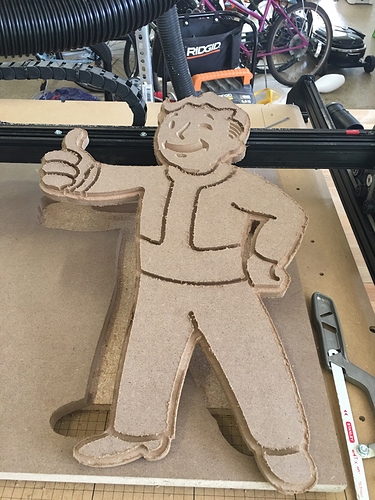 That looks Great, It really does pop. What kind of paint are you using?

Dude, I thought was photoshopped into the pic under the sconce! That’s worthy of selling on ThinkGeek!

Wow, that is well done! You’re right that a downcut bit would be better, but that still came out awesome.

That first picture is trippy. It does seem to play tricks with the brain. It would be super cool for us air brushing newbies if you provided some detail on process. Did you mask? It is crazy good. Nice work.

I am noob as you get with airbrushing. I watched one tested video on airbrushing, and went. I felt like I got the hang of it right as I finished. Yeah, I painted the MDF first with a flat black automotive spray paint to seal it and provide a quick base. Then spent the time to mask all the groves by dragging the blunt end of a drill bit that barely fit into the 1/4 inch grooves over tape. I spent as much or more time masking, so really my “air brushing” is more like general spray painting.

Those vibrant, bold colors make it look like something from the page of a comic book. Great job.

This looks great! I just carved out a vault boy plaque the other day! I just carved out his upper body and have been waiting to paint it. The hilarious thing is earlier this week I was thinking of painting it and then thought about airbrushing (something I’ve never tried) and watched that same tested video! haha small world.

Great minds :). Post a pic when you are done!

What’s the tested vid could u share a link?
strong text

Awesome! I love fallout and that looks spot on!

That’s great that you referenced that video. That is my cousin Frank.

I love this project. I am playing the game right now. I need to make one of these also.

I liked him a lot in that video! Cool

I still need to paint it but here it is! Tape measure for scale 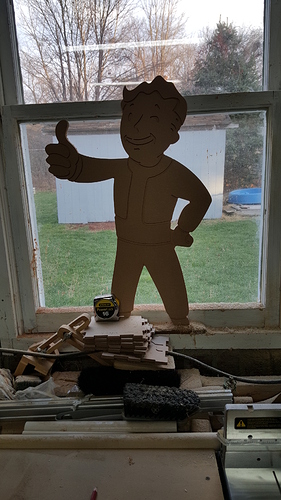