I am trying to smooth a small piece of aluminum (to get it ready for engraving) so I have a shallow pocket cut with a depth of .01.

The part is round so I set the origin at the center top of the material.

When I started the cut the first time the bit lifted and started air cutting, when I examined the gcode I saw why. It looks like vcarve is lifting the bit to the safety height and then instead of a negative Z move to bring to cutting height it raises it again.

I have never had any issue with Vcarve doing this before. So the odds are good that I have made a mistake somewhere, bit I can not see it, I manually edited the gcode to remove the two Z + moves and it worked fine.

My question is what did I do to tell Vcarve to behave like this?

Here is a screen shot of the material setup:

Here is the pocket toolpath setup

And here is the first part of the Gcode that it generated
line 4 raises the bit to the .201 safety height as it should
Line 6 then raises the Z another 0.2 for some reason, It should be lowering the Z instead
Line 7 then lowers the Z to the cut depth 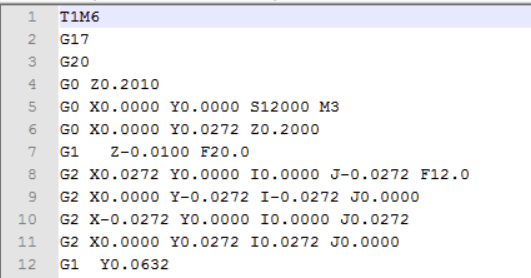 To make this work the way I wanted, I deleted line 4 and removed the Z movement on line 6. Everything was fine then.

Here is the Job Setup I have 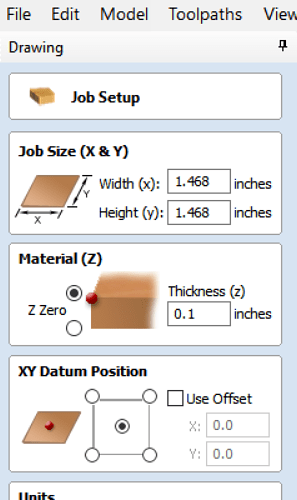 Any ideas about what setting I have that caused this?

I think that should have worked the way it was. Mine are all just like that.

I just checked some of my other gcode files and yep, all of them are like that. The Z moves are absolute not relative so Line 7 should have taken the bit to -0.01 regardless of where it was. (I hate it when I make those kinds of mistakes)

But for some reason it did not cut correctly, the Bit started the cut pattern 0.2 inches above the material.

I need to check the Machine Zero, maybe it was off.

Probably the Z-Zero was off, only thing that I can think of.

The way I read this is that you set your Z starting height to .201 and the cutting depth is only .01, that means that the bit raised .2(safety height), followed tollpath, lowered .2(safety height) then further another .01 which would be at .191 leaving a remaining .091 before the bit would perceptibly be at the level of the material of .1 Does that make sense? Your Z height is higher than the thickness of the workpiece and the requested cut. V-carve did what you asked it to do.

I thought like you did that the movements were relative so a Z1.0 would be a command to move the bit up 1 inch from where it happened to be. But for Grbl you have to send the G91 command to force it into Relative positioning mode (G90 will force it back into Absolute Mode)

If I misunderstood what you were saying please let me know.

I haven’t taken the time to learn G-code, i figure i will sometime just hasn’t been a need yet. So I am a little bit ignorant to some of your g-code terms. Question, why did you set your z starting position so far above the workpiece? Did you try setting it at .1"?

0.2 inches is not very high (less than a quarter inch), I use .2 as my default safety height because my clamps are .125 thick and I want to be sure the bit never hits a clamp when it is traversing across the work.