I have been having a problem with XCarve postprocessor to UGS. When using Easel PP problem did not happen.

After comparing GCODE output and PP files I think I found what appears to be the problem but why. Have to test tomorrow

The window on left is GCODE from Easel PP and on right is X-Carve PP. When I send X-Carve PP GCODE to UGS it raises up Z-axis until the limit screw stops it but it would keep going if it could. Homing switch is there but no effect.

I am assuming this telling the X-Carve to raise the z-axis ~15" but where is it getting the value 15.2010 from? Since Easel does not need it I am inclined to just comment out it of X-Carve PP.

Anyone help me understand what I am missing here?

Homing switch is there but no effect.

The homing switch is only used for homing unless you have hard limits ($21=1) activated in grbl. For hard limits to work correctly you would need to have six switches installed on your machine, one at each end of each axis.

Did you home your machine? What safety height do you have defined in Vcarve?

GCode in both examples was generated in Vcarve Pro (same behavior in 8.5 or 9.0) only difference is PP file for X-Carve seems to include the following lines that are not generated in Easel PP.

These commands are not included when same design is written out of VCarve using Easel PP. I have never gotten passed G0 Z15.2010. I have hit E-stop to kill it and initially when I turned XController back on Zaxis proceeded to drive straight down into waste board until the board stopped it from going further.

The hard limits part I am fine with and didn’t completely expect homing switches to stop the Z-axis in this sceanrio, but what might cause it to write out raise Z-axis 15". the value is the same 15.2010 in all files I have written out using X-Carve PP. Using MM PP value is same in mm 386.1054.

This is staring me in the face. Why can’t I see it?

Easel does some things internally so they are not included in the post processor.

The X-Carve post processor does not assume any pre-existing setup so it includes more commands.

Check your tool path in Vcarve and see what you have setup for the “Rapid Z gaps above material”. Is it 15.201 inches?

ARGHHHHHHHHHHHHH
Sigh… here it is. Thanks @LarryM . I knew it should be obvious but needed a set of sane eyes to. 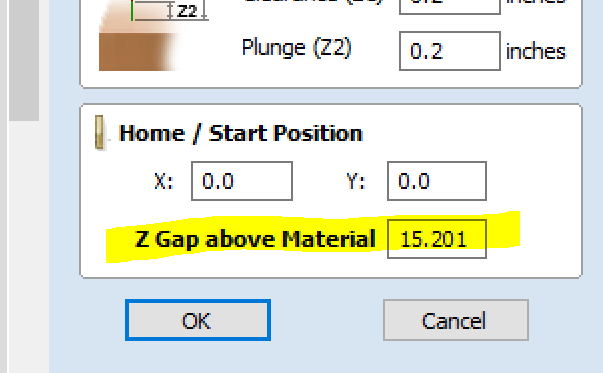