I am in the process of wiring up a solid-state relay so that I can control my DeWalt 611 router (start and stop) via the X-carve controller. While I am at it, I would also like to start and stop my dust collector.

My dust collector is a 3HP, 3 phase cyclone system controlled by a Teco EV Micro drive VFD. I’ve wired an external control box for the VFD containing a green start button (momentary NO switch), a red stop button (momentary NC switch), and a pot to control the blower speed (which I rarely do).

Is there a wiring diagram available somewhere which shows how to wire up the X-carve controller to a VFD? Electronics is not my forte (although I do have experience with controlling 3 phase motors with VFDs).

Thanks in advance, and thanks for the great forum!

here is the link to the manual of the vfd, I’m not sure if this one is the one you have

Thanks for your help, @AntonioLarriva, I think I have this figured out. The part I was missing is the relay. [The manual you referenced is indeed the VFD that I have.]

I forgot to mention that I also can control my dust collector using a wireless keychain fob. I took a closer look at my VFD wiring (which I had done several years ago); the fob is connected to a relay that turns on a small vacuum pump (7.5W, 220V, single phase, prevents the dustbin bag from getting sucked up into the cyclone), as well as sending a signal to the VFD to start the dust collector motor.

So, I already know how to wire this; just was missing the relay part. Thanks for pointing me in the right direction, and jogging my memory.

The plan is to get this wired up with my current setup, and then get this working with the X-Controller when it arrives (hopefully) in the next few weeks …

Glad to help, sounds like the wiring won’t be too difficult and a better than just using the jog input.

@AngusMcleod, I can’t take credit for the idea, but it is clever. Oneida used to offer this as an add-on to their cyclone systems. I just checked their site, and they now offer instead a rigid plastic liner that you put inside the bag and holds the bag against the drum. Far simpler. But the system I have works great as well for bagging the chips.

I’ll try to post some photos this weekend (I’m currently away from the shop). But I can describe the system.

When I normally operate the dust collector, I use the remote control shown here: http://www.oneida-air.com/inventoryD.asp?item_no=AMR220000&CatId={54003435-4EF5-48A6-B7CB-CF572BD394EB} . The two red wires coming out of the “receiver” (relay) connect to the two power legs of this tiny pump. [I mentioned that the pump can’t be drawing much current; these wires can’t be thicker than 20ga.]. There are two other pairs of wires coming out of the “receiver”; two are labeled “NO” and two are labeled “NC”. I wired these up to a VFD, which supplies the power to the 3 phase motor on the dust collector. So, as long as the VFD is powered up, clicking the “On” button on the remote turns on the tiny pump (220V, 7.5W, single phase) and starts the dust collector (220V, 3HP, 3 phase).

I originally bought a single phase DC system from Oneida (six or seven years ago), but had problems with the motor and swapped it out for a three phase motor controlled by a VFD. I really like to use three phase motors on woodworking machines. I’m not an electrical engineer, but I’ve read that three phase motors are more reliable, since there’s no need for a capacitor to get the motor started, and there’s a lot less wear and tear over time. And, with a VFD, you have complete control over the motor: you can start and stop, reverse rotation, control the speed, startup / shutdown time, etc., and get constant torque at lower speeds. (You also get overload protection.) This setup is particularly useful for a lathe, where you want to reverse the rotation and control the speed. You can often pick up surplus three phase motors for short money, and buy a new VFD, for the same total cost as buying a new single phase motor. Even if you get a motor has seen its better days, at most you may need to put in a couple of new bearings and it is as good as new …

@AngusMcleod, here’s what the pump looks like, as well as the dustbin. Hope it give you some ideas … 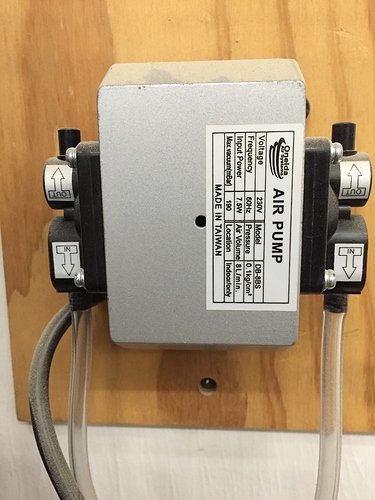 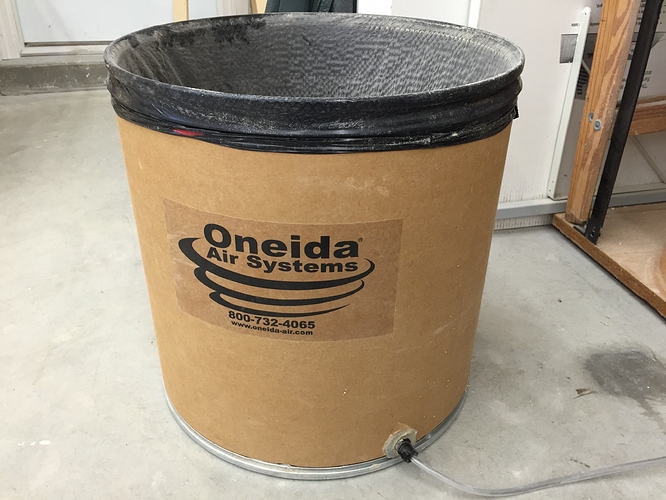 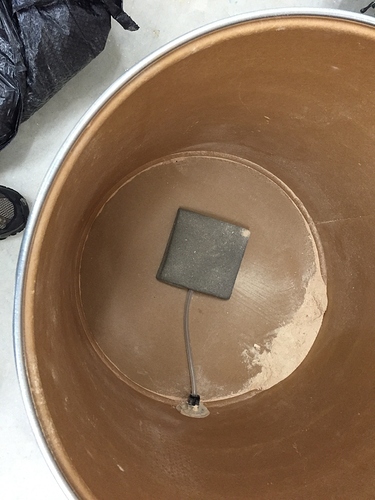