So I guess you can say things are really shaping up with using the X-Carve for guitar design. Here are some pictures of my latest build which used alternating puzzle pieces of red oak and walnut, joined together and routed in the shape of a flying V. The end product will be a TBD dual humbucker, 3 way switch, 1V / 1T, recessed hardtail bridge.

Check out my little LLC operation at https://www.facebook.com/DystopianGuitarDesign
The next two designs on deck are a walnut inlay of the Spiderman logo and a set of carved angel wings into the guitar body… 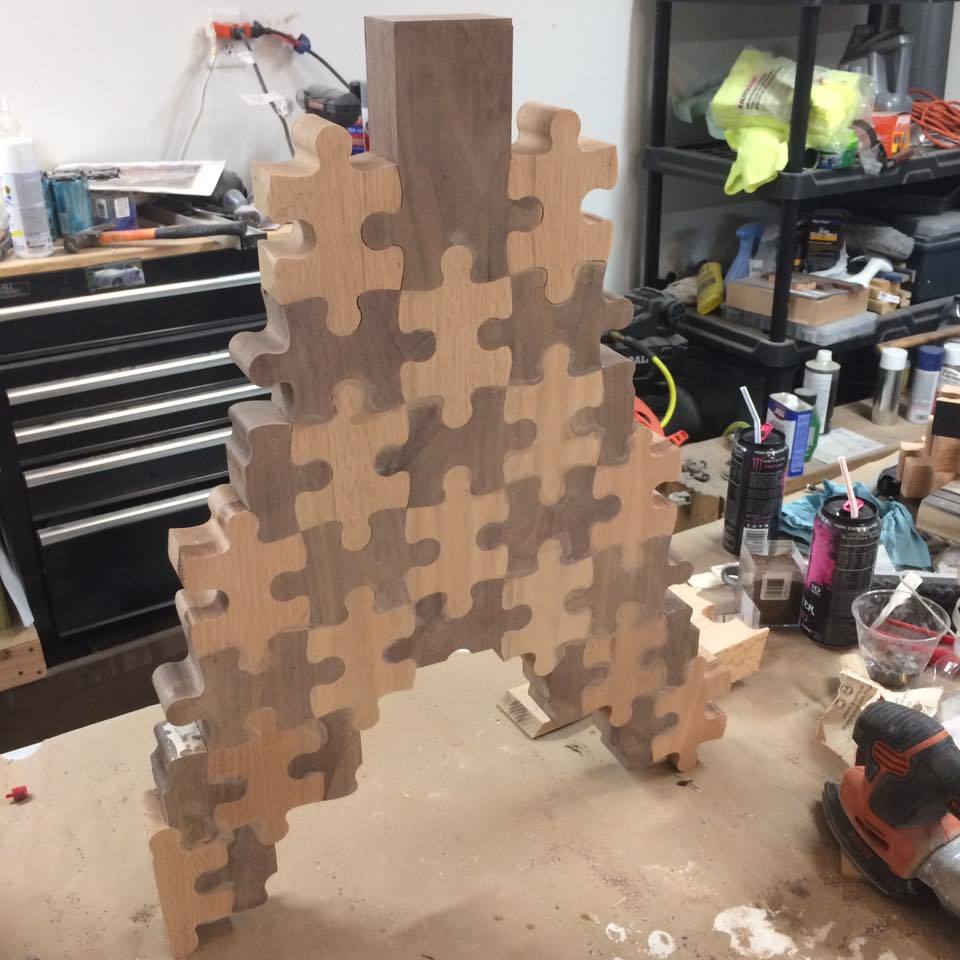 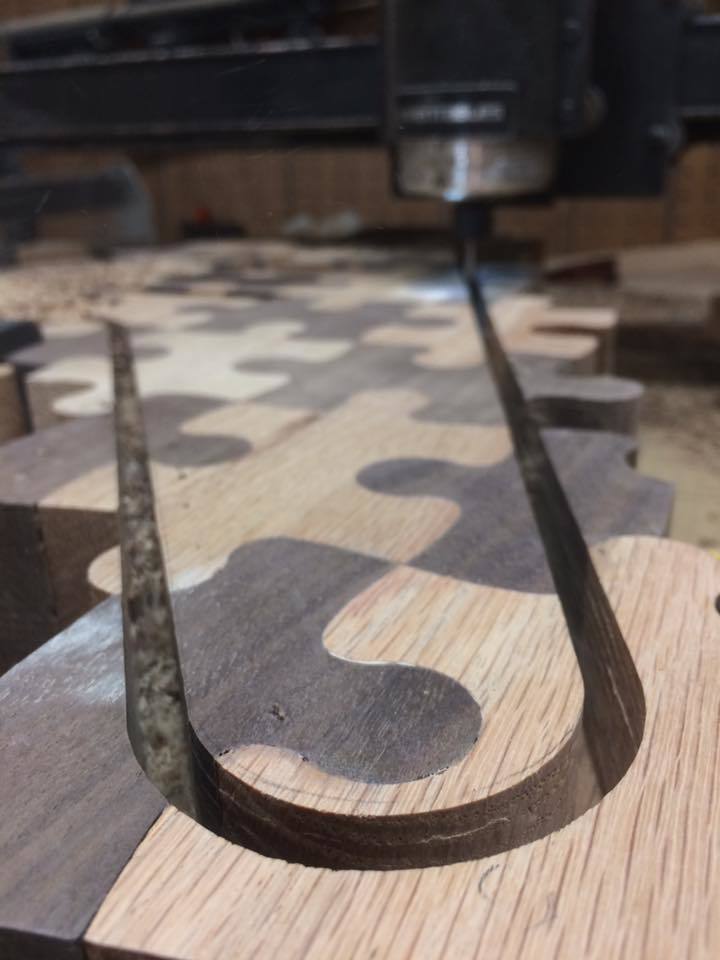 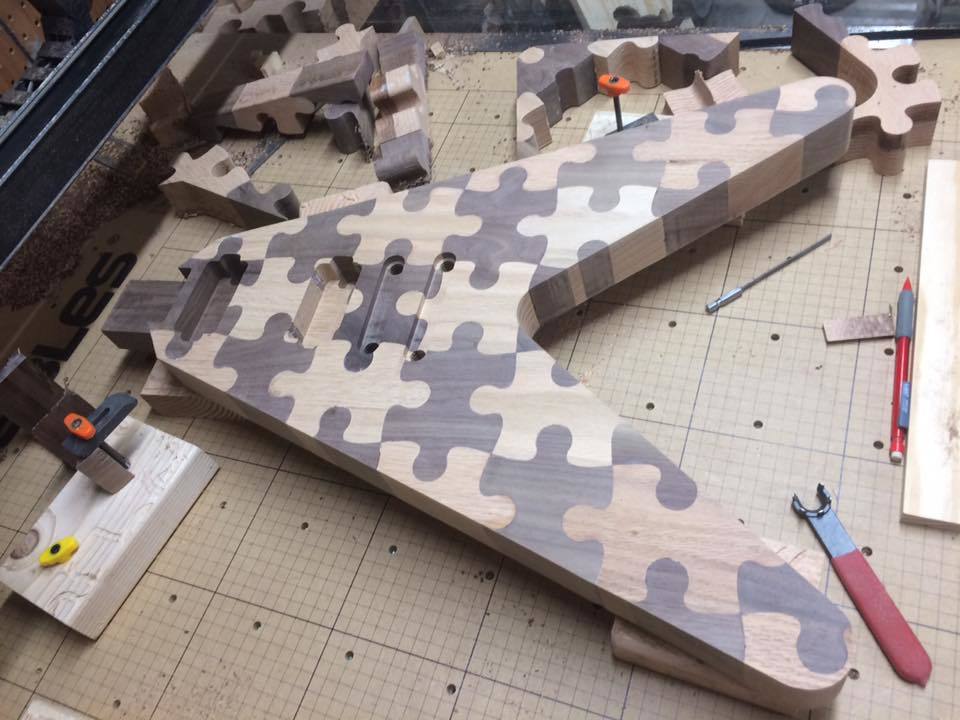 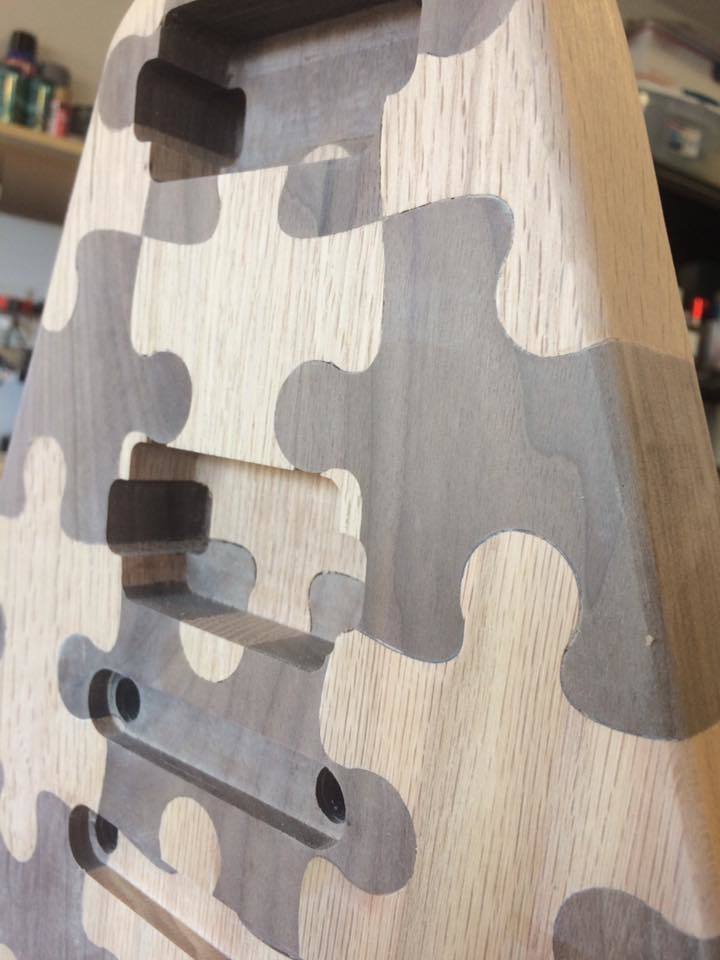 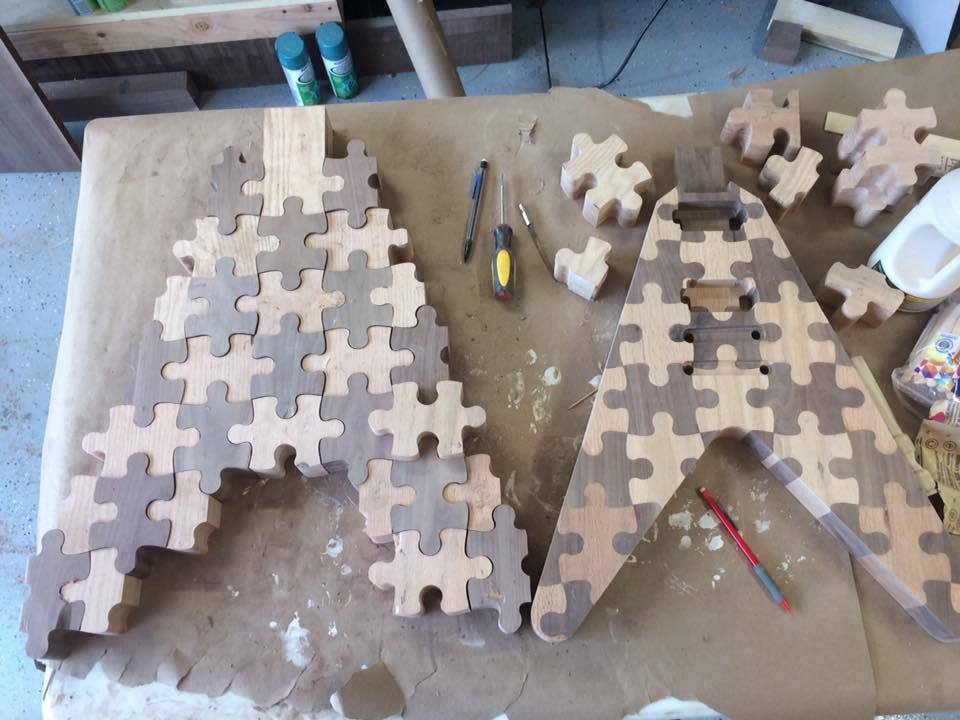 That is really cool! And is not puzzling at all, or is it? Great job, totally kicks ■■■!

I love how the neck pick up sits perfect inside the walnut puzzle piece.

Wow… just wow. That is really cool. How long have you been working on this? I’m not a guitar guy but I really appreciate the time and effort you’ve put into this so far. Please post the final guitar when you’re done.

Thanks all… I started it the end of February running all the individual puzzle pieces. 31 pieces at roughly 15 mins per then another 2 hours for the body routing = about 10 hrs of xcarve run time thus far and I still have the rear routing and neck to finish.

It was turning out so nice that I started running the second one before I even finished the first just because it takes days to glue each piece one by one.

I am completely disgusted at my own lack of ambition now.

Don’t be disgusted Jeremy, be inspired. I know I am!

What is the tolerance or will you share your files for the puzzle pieces?

So I actually did not add any additional fit tolerance to the pieces surprisingly… I first designed the core puzzle piece line to line and my rationale was that (through standard distribution of parts) that I would end up with an acceptable distribution of parts above or below the nominal design for both the concave and convex sections.

I know the Easel inlay app for instance lets you tweak the tolerance to produce a better fit (which I was prepared to do if the first couple didn’t fit) but even using an off the shelf 1/4" 2-flute straight bit in the Dewalt standard chuck spit out 31 pretty damn good pieces that only had a few small gaps or interference sections I fixed by hand.

michael schenker would be proud

That is beyond cool. I have done a V with a checkerboard top (maple and red heart over mahogany) but never considered puzzle. Mind juices are flowing.

After some 1/4" edge rounding and some Danish oil for grain popping, this is where the project stands: 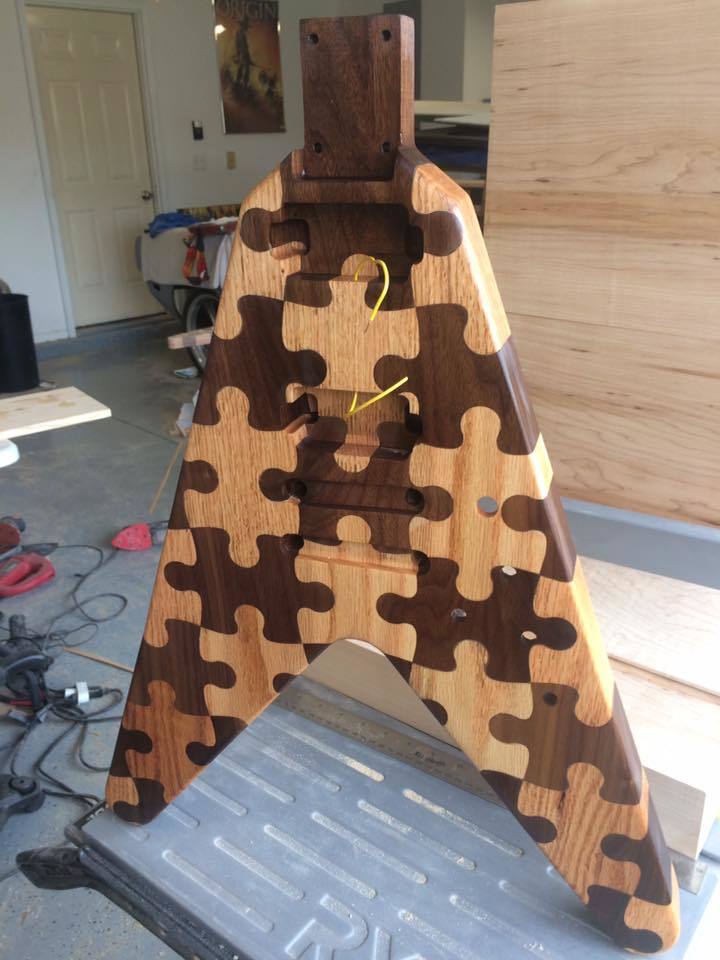 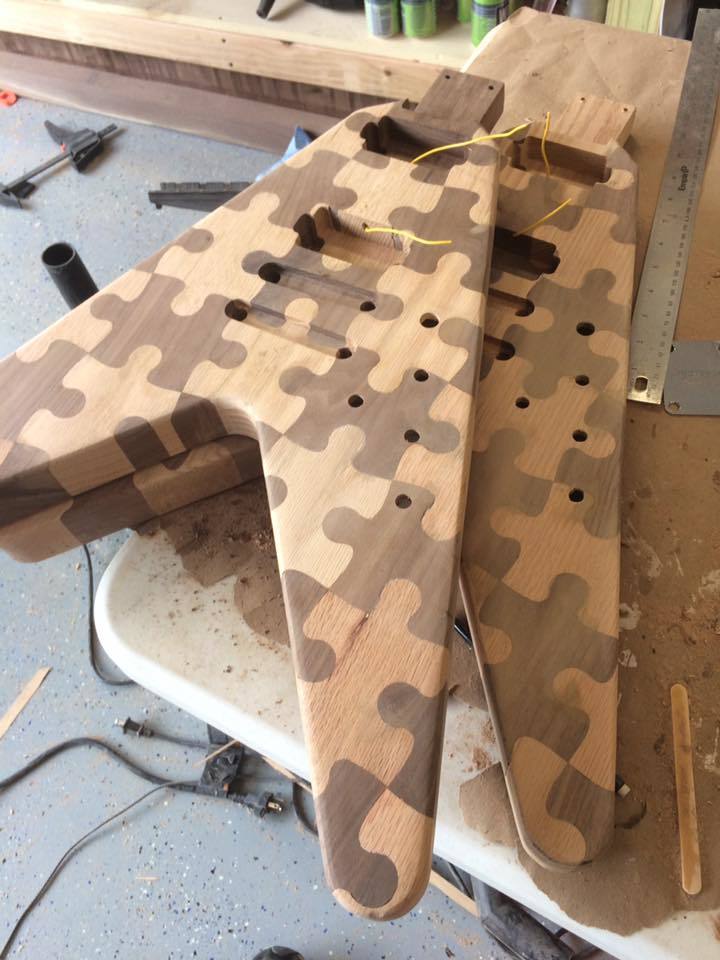 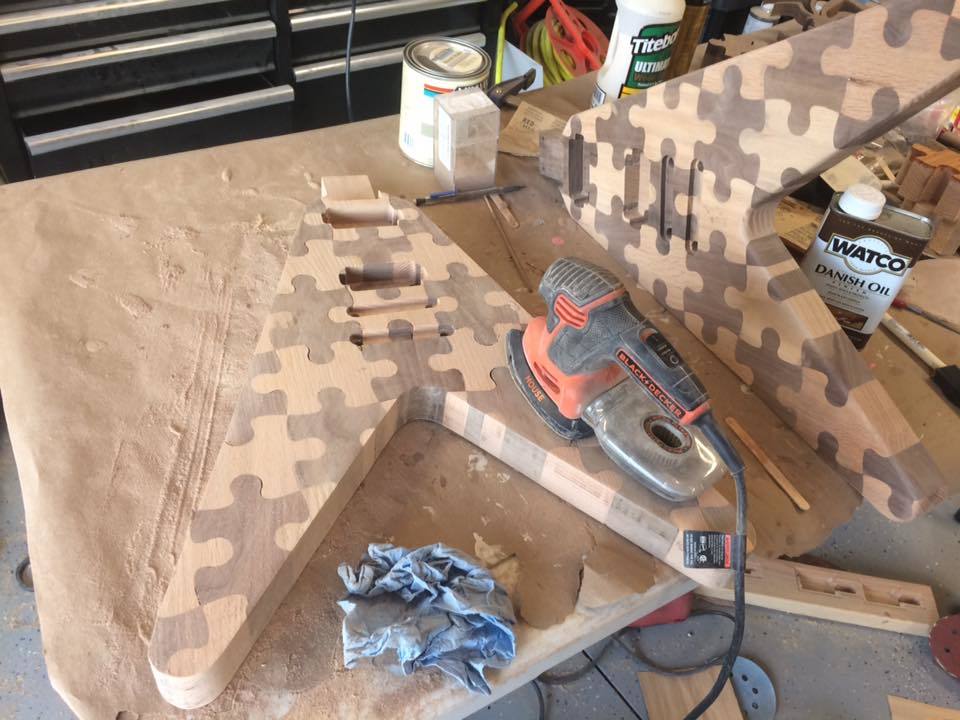 I see a few gaps in the puzzle interlock, how are you going to fill them? glue and sawdust?

(not being critical, I just want to maybe learn something new)

Wow Anthony, you have such nice designs

This is why people can’t just own one guitar…

The second one I ran did not come out nearly as tight as the first did I think primarily due to the bits I changed to which didn’t cut as precise so I ended up with A LOT more gap issues. I didn’t like how the glue / saw dust trick was working in regards to blending so what I did was first fill the gaps with glue / sawdust up to a certain point then, to blend the lines and fill the rest of the gap channels, I used a combination of walnut wood putty and walnut dust (since the dust from the actual cut pieces was a bit darker than the putty).

I hate gaps. lol I always end up with tiny ones when doing picture frames and sometimes I nail the fix and sometimes I grouse about it for days. can’t stand for anything to not be perfect.

Here is one method:
Carve the pieces a little on the tight side, before gluing them up soak the parts in warm water for 5-15min. This will soften the grain and you can force them together more easily.
End result will vary between wood types so YMMV.

Just as an fyi since it seems like many are focusing on discussing gaps, my X-Carve naturally has a .031" tolerance discrepancy in the X direction due to movement in the gantry. These first two guitars were made by rotating the direction of the puzzle piece in Easel 90 degrees NOT by rotating the wood blank itself thus the .031" tolerance issue was compounded for mating parts.

If you go to the Puzzle SG guitar thread I made, there are virtually no gaps because I cut all the pieces in the same direction so all tolerance variability would be in the same direction and everything would fit accordingly. If I rotated the piece in Easel to a vertical orientation, the -.031" issue would thin the protrusions by .031 which is where you see the gaps but if machined in a horizontal orientation, the .031" just gets taken off the overall width (which isn’t as noticeable).

Plus I’ve started oversizing mating parts to accommodate the .031" issue.

I do like the soaking idea though just to prevent surface chipping during assembly.