I’d been given a large sheet of roofing copper, so I’ve been playing around with cutting shapes out of it.

This is what I came up with: 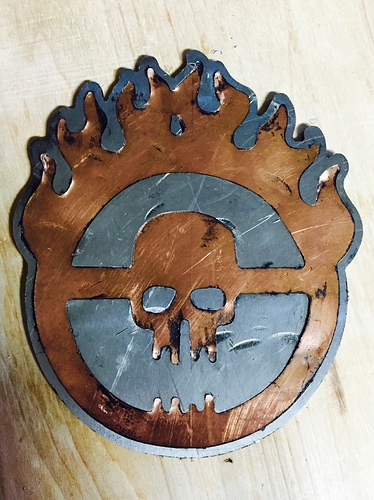 I used 1/8" aluminum and .5mm copper for this. I also used the inlay function of Easel, along with the 2-stage cut function.

I weathered it by beating on it with a 5lb sledge a few times and rubbing black spraypaint into the dents and cracks. I may do some more, and maybe add some dry blood spatter later on.

The copper cutting went fine. I started by milling a chunk of resin countertop I had completely flat. I used poster mounting tape to stick the copper to it, rather than use tabs. I set the depth to .65mm so it would definitely cut all the way through. A squirt of WD40 kept the dust down and kept the bit reasonably cool. At first I tried using the copper settings in Easel but it wanted to try a .4mm DOC which snapped 2 bits right away. The Aluminum settings worked much better.

The Aluminum cutting was a bit trickier. The rough cut went fine though there were significantly more chips to deal with. I had to set up a wooden barrier to keep them from falling all over the shop floor. The detail cut went ok till the end. The bit broke at 98% completion after cutting for 10 hours straight. If I could do it over again I would send the outline as a separate job and give things time to cool down, maybe put a sharp bit in for that.

Since the outline was so close to being done it wasn’t too hard to cut the piece out by hand with a utility knife. I did take a grinding bit in a dremel and go over the edges a bit where there was a lot of flash. And the detail bit missed a few places here and there I had to go over as well.

The copper inlay didn’t quite fit into the pocket either, despite leaving a .03" tolerance in Easel’s settings. I had to sort of bash it in there with a nail setter and wooden dowel after filing it down considerably. That’s ok though because the final piece was supposed to be weathered and beat up looking anyway. But it would have been nice to fit in there as-is.

This was all done with the standard 24v spindle and carbide 2 flute upcut endmills from Drillman on ebay. I used 1/4" for the rough cut and .0625" for the detail. The final piece is about 6" by 5".

Dude, very cool. Love the Mad Max stuff! I cut out this decal on my Silhouette Cameo for my Jeep (aka the MakerMobile). Would you mind sharing your file? Did you use the Offset app to create the outline?

I saved a copy of the file so I had 2 to work with, and in one I deleted the female part, and in the other I deleted the male. You’ll need to do that here too.