First, apologies if this is common or resolved elsewhere. I assure you I’ve tried searching, but phrasing is always difficult. Anyway, I’ve been using the machine for a few months with no real issues. I recently noticed something odd when I used a 30-degree engraving bit to carve an edge-lit acrylic sign. The lines were all wavy: 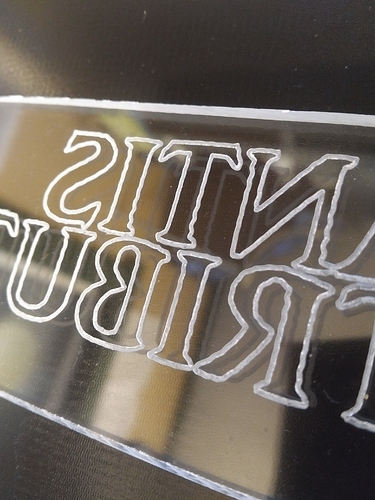 This was a logo that I used the image trace feature in Easel to upload. The thing that really struck me was how uniform the undulations were. Looking at the bottom of the ‘T’ and ‘I’, it looked identical and therefore intentional, so I initially thought it was just a bad image. To test that theory, I decided to make the sign again using text within Easel, and the result was definitely better, but upon closer inspection, it appeared as though the waves were still there. They were much more subtle this time, but still quite noticeable in certain places like the bottom of the ‘U’: 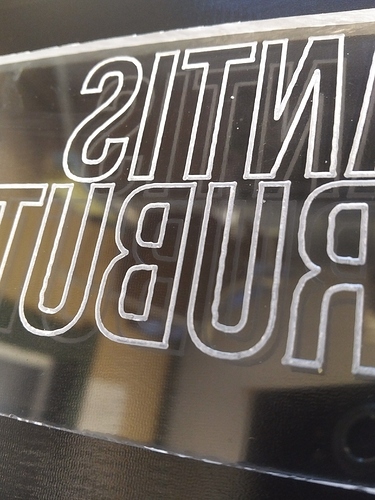 As I mentioned, I’ve done several projects before, mostly wood carving and two-color HDPE plastic, and never noticed anything like this before. But, I’ve also never done anything with the detail of a .01" engraving bit either. I use the precision collet, and I think I have the bit buried far enough into it that it’s not traveling on me. I ran these at about 90ipm, which did pretty well overall. But those waves just stand out to me, so I’m hoping there’s a way to get rid of them, but I really don’t know where to start. I appreciate any help I can get.

Take a picture of the tip of your bit zoomed way in and post it.

My first guess with no other info is the point is ground off center. 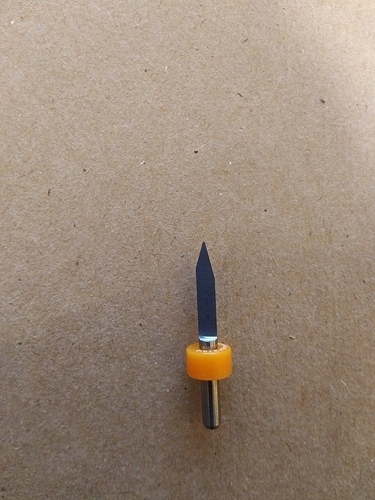 That was a tricky capture; the focus would not cooperate. Anyway,the bit was brand new when I started, these were the first 2 carves I’d ever done with them. But if there’s any more info I can provide, I’d be glad to. Thanks for the help.

Check your eccentric nuts/spacers a loose v-wheel will cause the wavy lines exactly like that.

I see. Ok. I will definitely check that out and tighten everything up.

i have a question that is not directly related to the OP, but the pic of that V-bit made me think of it.

I have a lot of similar V-bits, which have an eccentric tip. Much like the above pic. So as this bit spins, the zeroing point is not the tip of the bit, but a virtual point slighly underneath (when chucked in).

So how do you accurately zero such a V-bit???

So how do you accurately zero such a V-bit???

I always zero from the shank, and correct by 1/2 the shank diameter.

yeah but for true V-carving, chamfering and the like these aren’t very easily zeroed

the green is the actual bit
the red is when rotating because of eccentricity
the blue is virtual zeroing point.
if you zero with a touch plate or so your X, Y and Z will be off, enough so to matter.

If you used the image trace go to edit where all the little white dots come up and zoom in as much as possible and check the actual trace may be bad.

Full disclosure, this whole acrylic carve is based on your advice here. The 90ipm I mentioned in the first post was selected based on your numbers. I chose that bit from your tutorials. So, I guess when you think about it, this is really all your fault… But seriously, I copied everything you said with the exception of the the step over. I got nervous about changing it because Easel said not to mess with it if you don’t know what it means (I don’t). But I’ll change it next time I try the cut just to see how it goes.

All that being said, I appreciate all the advice provided so far. I didn’t get a chance to try it again, but I did check the v-wheels and one of them on the X-axis spun freely, so obviously that’s not providing the support it should be. I’ll give the machine a good once-over, and try the carve again. I’ll report back so if anyone else has this problem and searches for “Wavy lines” instead of “Jittering bit” or something like that, they’ll get an answer…

Sarcasm comes across poorly in print. I was only kidding, and in a roundabout way, letting you know that your extensive tutorials and advice on these forums gave me some confidence to try some other things with the machine. Sorry for the confusion.

Except that drawing is extremely over exaggerated and not accurate.

its exaggerated for illustration purposes. Thought that was obvious… Also I am talking about these V-bits in general, not that particular one.

And to show that it does make a difference:

Untitled-1.jpg1184×476 293 KB
This is a small v-carved font for an aluminium engraving I did a few weeks back. Its a 2mm thick disk of about 10cm in diameter with some text and graphics.
First one is with my 90 degree bit zeroed to the stock. Second one is with Z-zero compensation (eyeballed though)
I call that a very noticeable difference, so maybe get of your high horse for once.
anon68752607 April 9, 2017, 5:37pm #23

i think a lot of people do though

I’m going to make a “Thanks A Lot Phil” sign to put over my scrap bin.

Finally got back in the shop and went to work on the machine. Tightened up a few wheels and gave it another go. The result was much more like it. Straight lines, no issues. So, let’s review what we’ve learned here:

This may be a stupid question but. What do you mean by lopsided with a point? Do you mean that it has a true point but that point is off center? Just trying to picture that.

OK Now I get it. That makes sense to me.