Way in over my head

I purchased an X-Carve from a guy on Facebook. I’m a newb and have many, MANY questions but I’ll start with one about the stepper motors. He upgraded the motors to the ones I have pictured.

But the power cables he gave me seem to go to the original stepper motors.

I’m not sure if he forgot to give me a box but these are the only cords. Can anyone point me in the correct direction on how these should be wired to the X-Controller?

Yes those are the original stepper motor wires, the white plastic side plugs into the stepper motors and then the other end is individual plugs that go into the back of the XController. Does the XController have the green terminals on the back?
I dont know anything about stepper motors and if those will even work. There are a few guys on here that may know, @SethCNC visits the forum regularly and can probably answer some of the questions. 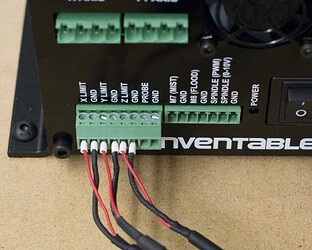 Thank you for your reply. The female plugs are on the back of the X- controller. I would have to see if I have the male part that is supposed to plug into it.

He also gave me these

Those motors have integrated drivers. How are the ones on the machine wired?

They are the same motors on the machine and they are not wired to anything yet.

Hmmm… The X controller has stepper drivers and outputs pulses to steppers. To use those drivers/motors (look like closed loop drivers), you need step and direction info that comes as direct signals from a microcontroller. Was the previous owner using the X controller? What other electronics did you get with it?

I’m assuming he was. I got the x-controller and he gave me 3 “extra” power supplies. There are also 3 or 4 of what looked like some kind of power supply interface PCBs. (I’m out of town atm and can’t go look). But other than that… that’s it. The old stepper motor data cables, cable for the spindle, etc. But no cables that look like they would have gone to these stepper motors.

If he wasn’t using the x-controller, how do you think he would have done it?

I found a wiring tutorial on youtube but it was in German and only further confused me lol.

On a side note, I have tried messaging the seller on Facebook with no response.

I’m guessing he updated from the X controller. The X controller has built in motor drivers that take input from the MCU and output signals directly to the steppers. Your steppers (servo hybrid) have an integrated driver that require the input directly from an MCU. I don’t believe you can use external drivers with the x controller.
The power supplies are most likely for the steppers. Where the specs on the PSUs?

If he wasn’t using the x-controller, how do you think he would have done it?

With a different controller that allows for external drivers.

I have tried messaging the seller on Facebook with no response

I assumed so. I’m sorry about that.

I’m Interested to see the back and inside of the X-Controller.

As Neil said, those steppers won’t work with the stock X-Controller, But that’s not to say that the prior owner didn’t gut it and re-use the box and install new controller board, which may explain the extra power supplies…

Here’s a reference to what I suspect may be inside of the X-Controller box: ( from one of Neil’s prior comments even

) One could wire into Arduino Uno pins 2-7 to be able to use those steppers with integrated drivers **BUT the closed loop part makes it a little more tricky as a 3rd Enable wire is also required (not shown in the wiring schematic, BUT it is present on the Arduino board Pin #8) **

The internet has lots. (and I’m sure tutorials) Everything is labeled (unless you’re talking about using the discreet chips). Quick google search turned up this: [image] Grbl’s connections can be found on the GitHub site. [image]

Here’s some data and tons of photos of the internals of the stock X-Controller to kinda compare yours too and provide some guidance (following the assembly guide backwards) on how to open it up.

When I get home today I will get pics of the X-controller.

I really appreciate you guys racking your brains for me.

These are all of the electronics he gave me.

And here is back and inside of the X-controller

I think @NeilFerreri1 is probably right that he abandoned the X-controller. I’m just surprised he would have all these components loosely laying around and wouldn’t have had some sort of containment for them.

But maybe he did. As I stated in my original post, I think he forgot to give me a box. I was given zero wiring for a setup other than the X-controller.

Well, looks like you have options.
Those (the two that are the same) look like Ethernet CNC controllers… Definitely not Grbl. Maybe Mach 3/4?
I think your 3 power supplies are 5v for the controller, 24v for a spindle ( did you get that too? Looks like some sort of pwm controller for that maybe) and 36v for the steppers.
None of this is standard Xcarve.
It really depends on what you want to do as to what your options are.

This is the spindle I have

Those (the two that are the same) look like Ethernet CNC controllers… Definitely not Grbl. Maybe Mach 3/4?

Well that’ll be the source for connecting things.
What’s the green board with the screw terminals?

Yes with a VFD. Forgot to picture that

That makes things easier. Are you planning on using Mach3 or Mach4?
What’s your experience level with CNC and digital electronics?

I’m pretty handy and I should be able to get it figured out once I get headed in the right direction.

Mach 3 or 4? At this point I guess it really doesn’t matter. Is one preferred over the other? I would assume Mach4 to be the better option.

Mach4 to be the better option

I’d agree.
You’ll set up your pins in the software. Then it’s a matter of connecting your smooth stepper to the motor drivers and any inputs (switches, probes, etc) and outputs (vfd, coolant, etc) and lots of configuration on the PC side.
You’ll probably want to find a different forum for help with those details.
Alternatively, you could sell that stuff, get some stock NEMA 23s (and a couple of dinners at a fancy restaurant) and use the Xcontroller and gain full access to @SethCNC and all of his helpful videos.

I thought about going back to nema 23s and maybe upgrading to this in the future once I’ve got a grasp of everything. He upgraded from belts to acme screws, would nema 23s be sufficient?