So I found the US DOD posts high-res vectors of the seals of each of the branches. I wanted to do a nice carving for my niece who is an artillery officer. I loaded it into Illustrator and saved it out as SVG. When I import it into Easel it shows a tiny carving in the corner. It lets me scale it (weirdly the depth is 0) and if I try to do anything other than cut through it goes to a blank circle. I am sure this has to do with the absolutely insane number of nodes in this image. I asked Illustrator to simplify which did reduce them. But still nuts. It will not let me do a partial dept carving. I can cut all the way through (I realize I can cheat and lie and tell it that I have a 1/2 thickness stock and then do an outer cut circle as a second op to cut it out. Clearly the software is confused to start with (the 0 should have a blank preview not cut all the way through?). Simulate just hangs.

If someone wants the SVG file:

It’s a messy svg.
A lot of open paths.
Cleaned it up with Inkscape. 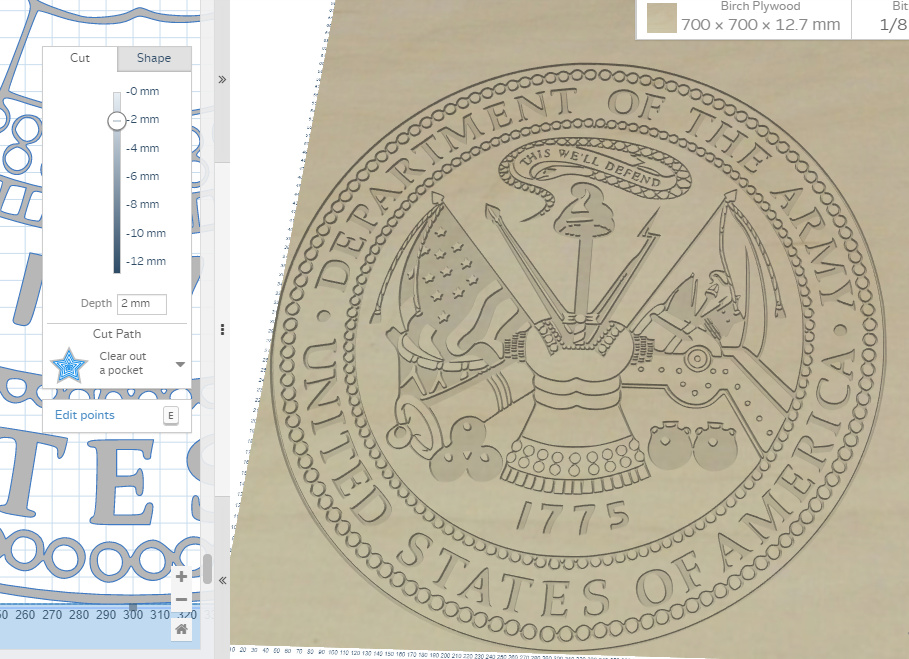 Do you have a quick or automatic way to close open paths in Inkscape? Or a pointer to a good tutorial? I have tried a few but they seem to go round just manually joining nodes.

Thanks. At least I’m not going crazy. Any chance you could shoot me the fixed SVG?

Awesome. thanks so much. I ran the select open paths in illustrator and it essentially selected everything which wasn’t helpful.

You’re welcome, I just went in Easel and fixed “THIS WE’LL DEFEND”, the type was bad.

the type was bad

If you look at the original eps on the DoD website I think this might be a trace of a scan of the woodcut or something. The letters certainly aren’t smooth enough to be cracked outline of a real font.

Any chance you could shoot me the fixed SVG?

Sorry, I thought I had shared the link.
Look like @RussellCrawford’s got you covered.

@RussellCrawford Have you created the new space force seal?

Apparently the DOD does not have an official seal for them:

@PhillipLunsford
How about this one?

Yes, I just Googled it and found a lot of the logos. I am going to try and laser one tomorrow and put it with my other seals on the wall.

@NeilFerreri1 That looks awesome. It looks just like the one I was working on in Easel and in Lightburn. Going to try it tomorrow.

I may have the wrong type of seal.

So I just did the carve on that (in general looked great, I have to redo anyway due to the board was slight not-flat so got variable depths). Anyway the strange issue I encountered was it did the outer cut out with the V-bit. I mean not that you can’t slot with a v-bit with tabs, but hardly what is optimal compared to the regular end-mill. Since I am used to “regular” CAM like F360 where you pick the tool for a given operation (that would have been perfect to have cut out (with tabs) with the 1/8" end-mill and then chamfer with the V-bit.

Do the cutout on a separate page.
When attaching an Easel File
Go to File…Share
Select Shared with Link…Highlight link and copy link
Then Hit SAVE…paste link in forum