What is the maximum recommended Nema 23 motors?

The problem with using a RPi 2 is there is nothing on board that can generate the step pulses that is required for stepper drivers. This would have to be done externally with a PIC32 or something similar. This is where the BeagleBone Black shines as it has an onboard PRU for tasks like this. It more complex than just having a bunch of GPIO pins.

[off topic]
Yep, I used the 029 for five years and paper tape as well. The physics lab had a data collector that only supported paper tape.
[back on]

Both of those equal out to 79 shipped.

If you are not reliant upon Easel, just get a parallel port card: 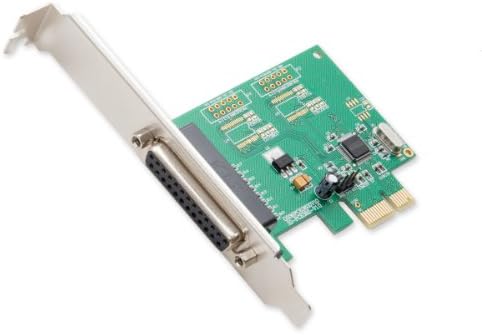 For $14.00. I use these and computers people have thrown in dumpsters for my CNC projects and they are more than capable. Plus you get a nice (probably tan) metal box that houses the computer and has TONS of space inside for power supplies and the BOB and stepper drivers.

Here is a shot of a 2011 machine with a parallel port card that had a port INSIDE the machine - which was cool so all the electronics could be inside. The BOB is mounted right above the stepper drivers. The 36 volt supply is up top on the left: 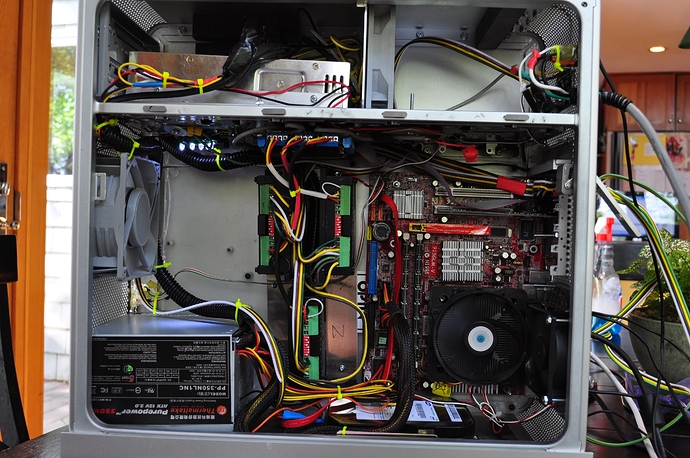 Would this be a step closer to what you want? 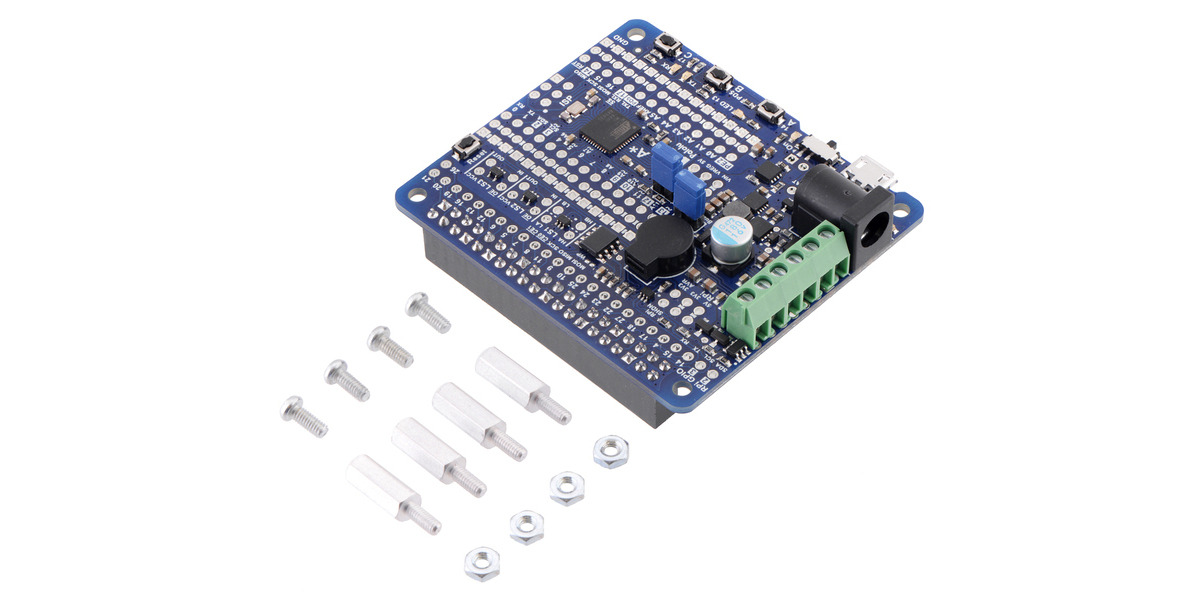 This programmable module combines with a Raspberry Pi to serve as the control center of a small robot or electronics project. Its ATmega32U4 AVR microcontroller comes preloaded with an Arduino-compatible bootloader, and the board includes dual motor...

Voltage and current ratings are too low on that model, plus it is not a stepper driver, it is a PWM motor controller.

I have similar setup with a few more external drivers. No enclosure. Have not found one big enough. 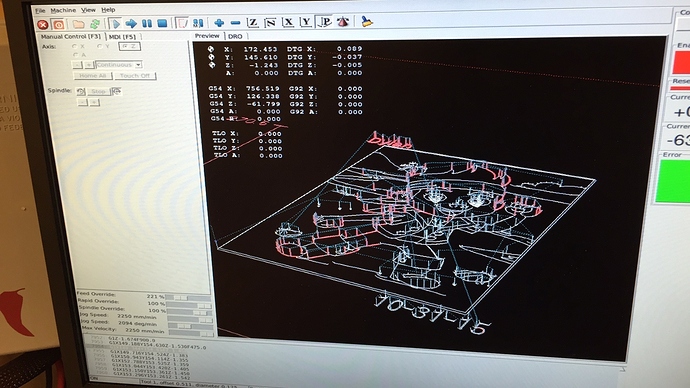 For another project non-inventables related but, I am currently building a 5 axis rotary machine which is controlled by beaglebone black with a 7" touchscreen with a custom DB25 cape running MachineKit (LinuxCNC) 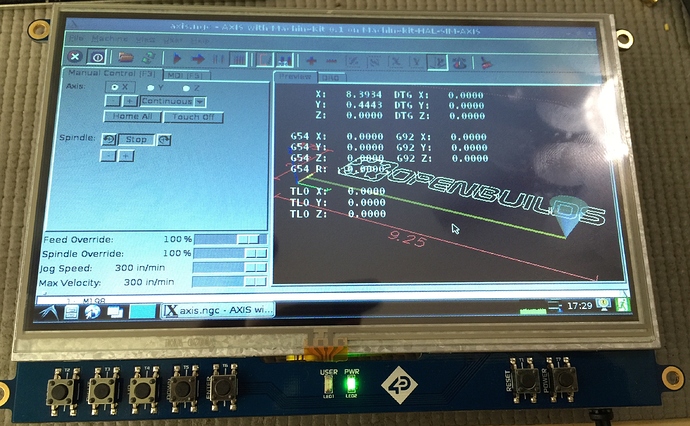 Back shot of the hardware. 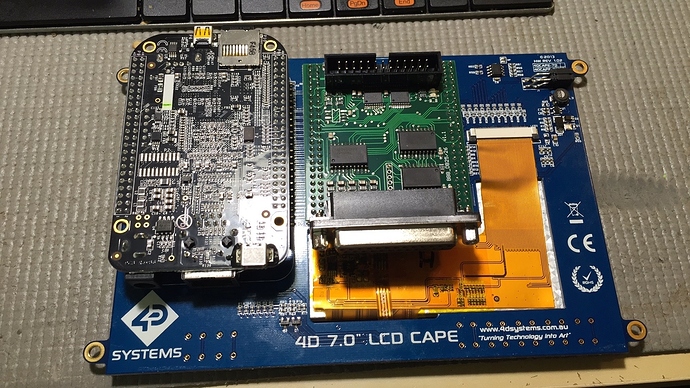 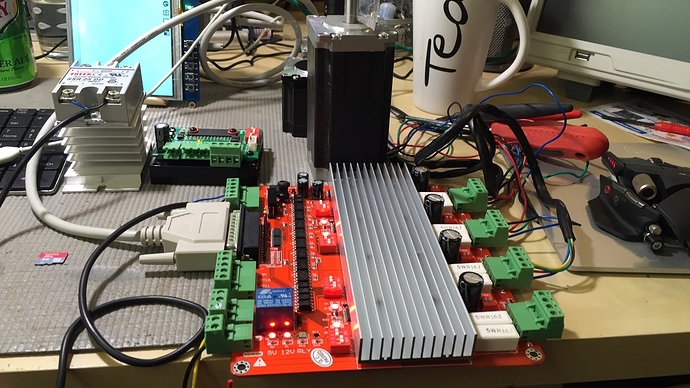 The general point is running a motion control app like Mach3/4 or LinuxCNC is not expensive and does not require an older machine. Most people use older machines because it is something they already had (i.e. I used an old HP DC5100 SFF what was our XBMC box. Ironically replaced by a RPi B+).

The one caveat is you should not use a laptop/notebook /w a DB25 port. If you have a standard desktop that does not have a DB25 port (aka LPT1 or parallel port) you can add one cheaply. The one main thing that needed is a breakout board and stepper drivers.

Yeah, I was going for the additional add on I/O not the on board driver, to replace a parallel port.

Dave,
I appreciate the reply to the reply. have read the other comments re:Parallel port and agree, this port does take some of the processor duty from the CPU.
The truth is, I’ve been in IT most my life now, from punch-cards to 10" Tape Reels and disk drives that weighed in over 100lbs. to the HP Servers w/virtual drives and SSD backups that I use these days. I’m a glutton for tech and with what I’ve been reading over the past few months on CNC, I will be morphing over to a PC based system probably within a month or so. I need to get my whole feet wet in the tech I presently have. I’m only into my 3rd carve, and although I consider each more successful than the carve, before, I still haven’t gotten a 100% no problems-carve. soon… very soon.
After i finish up with these test carves and move onto acrylic and maybe dip into aluminum, I’ll be moving onto a more robust X-Carve with a PC based controller system. I certainly do appreciate all the help i’m getting along the way and hope to be some help to others as I create, troubleshoot & solve my mistakes along the way.