What is the maximum recommended Nema 23 motors?

What is the maximum recommended size/torque Nema 23 motors for X-Carve 1000? Would 425 oz/in be overkill? Are 270 oz/in a better fit for this belt driven machine? This question applies to only the X and Y axis motors (Z-axis max physical size is 61mm). Thanks in advance!

You can install a physically larger motor on the Z axis if you flip it upside-down, and use some longer bolts and spacers to get the pulley at the right height. Ask me how I know!

I have four 270 oz-in motors on my machine now, and it’ll drag my Ridgid 2401 router around the table much, much faster than I would ever actually operate it in practice. Changing the Z axis motor was probably a little overkill, but I already had it on hand, so why not? I doubt I would have bought a 4th one just for that though.

I can see even larger motors being beneficial if you’re using a very heavy router/spindle, and you’re certainly not going to hurt anything by going bigger (unless they’re just too much for the gShield to handle), but I’m quite happy with the 270’s for now. Just my two cents.

Timothy, did you have trouble getting the 270oz nema 23 to fit into the Z axis? I have one on hand also, but have not yet tried to incorporate it into my machine (regarding the z axis of course). I also thought the length of the motor (73mm) was too big to use, however this is purely through observation and not for want of trying… I am hesitant to take the machine apart if it is a no go.

I 2nd that. NEMA 23 and 24 motors use the same hole pattern. Large Z motor mounts easily upside down. I am using two spacers on each screw which is not ideal, but its working and I have a feeling that might be something I never manage to fix. I am dragging a big Hitachi around. Still with the mechanical advantage of the Acme screw, a Nema 17 would probably work, but this enables me to use much faster speeds more reliably. If I remember correctly, I could not get my z to travel faster than 50 ipm without hiccups before. Now, I am not sure what the upper limit is - but I think it is limited by the timing of my computer because of the incredible number of steps per inch required by the z axis.

Thanks for the feedback guys! Ordered a set of 57BYGH115-003 motors and DQ542MA drivers. Will report experiences with this config once the machine is up and running. Will also be adding some flat steel between the y-axis rails and steel angle iron sections on the x axis. Overall the finished machine should be a capable beasty.

off topic - Does the Ridgid 2401 have threaded mounting holes towards the base? I saw a pic and it sure looked like it…

It doesn’t, unfortunately. The business end of the router is actually very user-hostile with regards to adding anything like an air deflector or dust collector…I’m using mine because I already had it, as well as some custom mounting clamps, from an incomplete DIY CNC build I was working on. When I have the extra money, I’m totally jumping on the Dewalt 611 bandwagon like everyone else has been doing.

Upside down mounting of the Z axis stepper? Can you provide a picture? I wound up ordering the 496oz steppers for everything except the Z since I assumed it would not fit in the limited space.

I don’t have any pictures of it yet, but you can get the idea from this photo. Mount it upside down, on top of the plate. Use spacers to put the pulley in the correct spot. 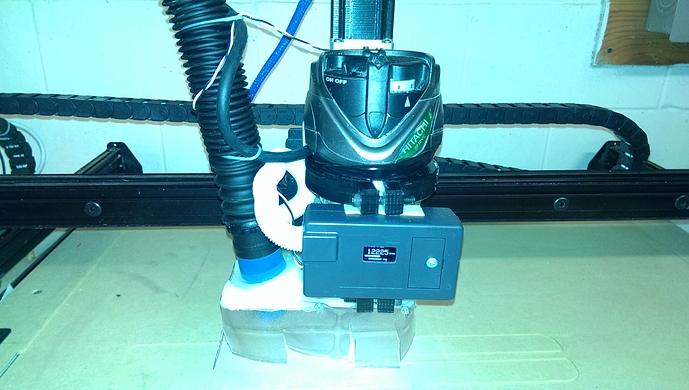 Sorry @BrianWare, I’ve been away for a bit and haven’t been able to reliably access the forums. (and no, I was NOT in jail, no matter what some of these other guys might tell ya.

Here’s a shot of my Z motor. It’s sitting on four aluminum spacers I had in my parts bin. I hadn’t even measured them before because they were “just right”, but I just now put a ruler to them and they’re 7/8" long. The longer attaching screws also came out of my parts bin. I have a pretty awesome parts bin that, defying all logic, always seems to produce what I’m looking for with a minimum of fuss. 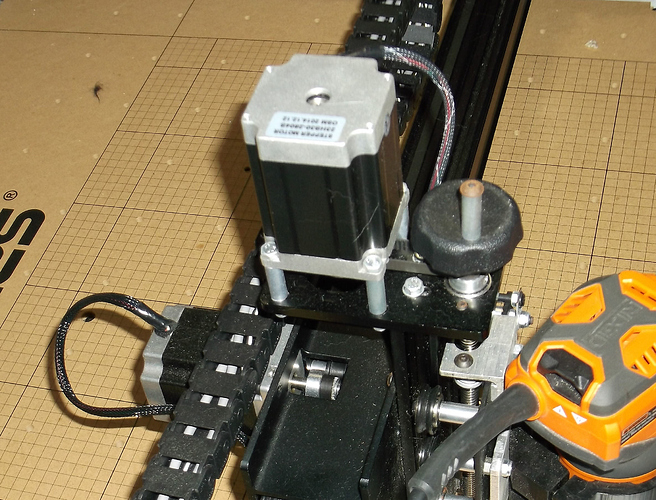 That is a great picture, it looks like I can even create a dust shield as part of that riser to keep that area clean. After the X-Carve ships and I can get it in hand for measuring, I can create the part either out of an acrylic chunk or aluminum with an acrylic window so you can keep an eye on the belt/pinion.

MorganKinnear,
I’m curious as to how you would hook up the CQ542MA drivers to the Logic side? (arduino)?

For clarification, the stock gshield drivers can only push 2.2A per axis. And remember that the Y Axis is shared. So using larger steppers that exceed the 2.2A max on the stock driver board will not help.

The proper way to do this with larger steppers is use external drivers. Which can be done with AVR based motion controllers like GRBL, TinyG & Smoothie.

Larger NEMA 23 can be used. Check the datasheet to make sure you are not exceeding the stock drivers max output.

Not saying it will not work- But you are not going to the results you are expecting.

I guess the proper analogy would be placing a 24V bulb on a power supply that can only provide 12V will not make it brighter.

As on how to use a external driver on for example GRBL. You need two wires Step & direction. And depending on the driver you may need a enable pin (which is just 3.3V or 5V from the AVR in question)

You can either do this with a custom shield (by using a blank protoboard with you can get on amazon and if you lucky to have a Radio Shack there too.) or use jumper wires to a PCB.

If you want to get fancy shamcy-

Digital 11 is Spindle Speed (PWM)
Analog 0 is Abort
Analog 1 is Feed Hold
Analog 3 is Coolant (or ShopVac for dust collection which is gcode M8 for on and M9 for off)
Analog 5 is for a Probe.

Hi, David,
ok… maybe I’m mistaken here, and confused. My question was about the CQ542MA drivers. I have a set of M542 drivers (almost identical exteriors to the CQ542MA). I’ve used them in Stepper motor projects before. These are the devices that will drive the windings of the Stepper Motors. I’ve run Stepper motors through these via Arduino several times. I totally understand that each of these drivers will run one 4-wire stepper motor with higher current values than the G-Shield has available.
So, i understand your point “A” above. Points B & C, if i’m not mistaken, are necessary if you go along and use your point “D” (except that i think they’ve found a solution for the Mach 3 without needing to use a Parallel port. this, however may be only for the Mach 4).
To my knowledge, all that the driver(s) need is power and PWM & Direction voltage. An Arduino can give this to the driver.
I think your statement may have meant to say, that YOU would not use an Arduino to control the DQ542MA (sorry that I spelled it out incorrectly before in my question above).
It’s my opinion that an Arduino (maybe one faster than the UNO) would have enough programming power to interpret G-Code and translate it into whatever language the Drivers want to interpret. (which, if i’m not mistaken is only PWM & DIR.)

I was trying to show that if you want to get the most out of those drivers that Maybe something more than an Arduino. It is my understanding that your control software takes the Gcode and turns it into direction and steps for each axis as needed to complete a line of Gcode.
Mach3 and LinuxCNC use the parallel port to transmit that information to the drivers that then send the correct number of steps in the correct direction for a line of Gcode.It is my understanding that mach4 has eliminated the use of the parallel port in favor of the USB port and a smooth stepper card.

All three of these programs have more features and run with less problems than I am seeing on the forum with the Arduino/Gshield combo that a standard X-Carve comes with.

I was trying to show how I would go about using those drivers on an X-carve or any other CNC machine for that matter.

You will see that ymilord talked about other ways of working with the drivers in the post after mine.

Just a few points on this discussion:

The gShield is rated for a maximum 2.5 amps per phase.

The M542 and the gShield perform exactly the same function. The M542 controls one motor, the gShield controls three. They both use the same inputs.

Stepper motors don’t use PWM, they use STEP and DIRECTION.

Arduino is fine as a controller. More CPU would allow for higher order calculations, but I’m not sure that it matters for a machine like the X-carve.

Do they use punched cards for backup? Or perhaps paper tape? wink

Actually a lot of programs that manipulate hardware directly used the parallel port because it gave you a minimum of 8 digital I/O ports on any machine without having to have a dedicated I/O port card.

You’d need two per axis. Plus Limit switches. Spindle on or PWM. If the spindle supports CW or CCW. Probes and a ESTOP.

I guess this is similar to a ford vs. chevy debate. What it boils down to is use whatever you feel comfortable with.
Arduino based motion controllers are good. But have limits. The only thing that edges ahead of GRBL is TinyG (or TinyG2) as these are based on a 32bit MCU. And the Arduino Due (TinyG2) has more GPIO pins. (And yes you ‘could’ flash GRBL to a arduino mega- but it’s buggy and you are still using a 8bit AVR)

If you happy with the baseline feature set that GRBL (or the likes) then look no further. But if you want more complex feature sets (3D digitizing, Multi axes rotary, Proper start stop from any point with in a gcode file, real time dynamic feedrate/spindle control, pendants etc. ) . You have to look at the PC based motion controllers.