What upgrades would you added during initial build

I upgraded to a CNC Shield, Nema 23 motors and a custom plate with a second bearing for the bottom of the ACME Screw.

I would drill out the endplate holes in the X-Axis (the ones that hold the Y-Axis motors).

From the factory they don’t leave any tolerance for adjusting towards-away tilt in the spindle, so it’s impossible to square the spindle if those holes aren’t perfect (which they aren’t).

Here’s my list. I have a 1000 x 1000 X-carve and carve hardwoods; may attempt some composites / Corian in the future. [The X-carve is my first foray into the CNC world.] Some of these are done, others are waiting until after the holidays (busy carving!):

The one thing that I wish I had done is to spend more time on the wiring. By the time I got to that step I was so anxious to see the machine work that I rushed through the wiring. That resulted in many hours spent later trying to debug electrical issues.

Installing high quality four wire connectors on each motor would have saved me a lot of time and effort later.

Tom, where did you get the lower bearing parts?

They came with my “xyz-carve” kit from a supplier over here in Australia. Shipping costs were keeping me from owning an x-carve until I discovered a local source. It’s not technically an x-carve but it is based on the design.

I don’t know if I can name the company as they are an inventables competitor. I’m sure you can use google.

I ordered a second Z motor mount with a bearing. The part that f the motor mount that the Z stepper motor mounts to can be cut offmore used to attach other hardware to. This plate can be mounted to the bottom of the Z axis the same way that the top plate is mounted.

A longer acme rod will be needed and the bottom of it will need to be machined to fit the bearing.

I plan to remove the stock bolts that are holding the bearing in place on the Z motor mount. I will install a longer bolt from the top and trap the bearing with a nut. This will allow the bolts to protrude out the bottom. When the Delrin Nut comes up on the axis, these boots will act as a Stop. This will keep the z carriage from crushing the limit switch

I have not performed this upgrade yet but will post photos when I have.

but this is my favorite upgrade! (2 instock) Ultimate X-carve Limit Switch Shield

Nothing. Build it. Use it, Then decide what makes sense for you and your application.

Agreed, build it and get it going, then worry about upgrades.
It’s easier to sort out any issues if you don’t have to factor in any changes from standard you have made.
It makes providing assistance easier as well if everything is standard.

I would agree, but would get the E-Stop from day one

A mod sometimes over looked is stabilization of y axis. I found out this week while doing a project. I guess most use small bits and it is not much of a problem but when i started running .5-.75 inch router bits as the carriage starts a cut from right to left the y axis rails would flex causing chatter after adding l brackets to the middle of the y axis rails there are no issues. Oh by the way dewalt is the way to go. To make a long story short i had a .5inX1.5in router bit cut a slope into a .75in piece of wood into the table and just shy of cutting all the way through to the point the z was off the rail and the collet was buried and cutting wood at 60ipm and the dewalt never even bogged down true test to dewalt power lol.

I would normally agree, but the X-axis stiffening mod is much easier to do if you perform it before you assemble the gantry.

X axis had already been done. Bigger cuts and higher travel speeds and when the y axis issue showed. Just like to keep everything as rigid as possible.

Well, my intent was largely to point out that while most mods can be easily added after initial build, the X-axis mod (at least the one with the solid core) largely requires disassembly of the X-axis, the corresponding wiring, etc. Makes it a lot easier to stiffen the X before you assemble the rest of the unit. The Y-stiffeners you can add as needed. 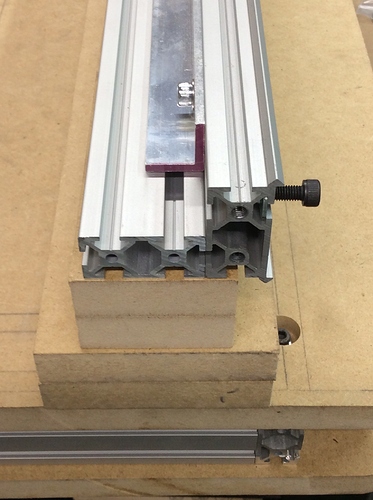 Here is how I upgraded my Y axis. My y rails are 1800mm so I wanted to make them as ridgid as possible. This makes them rock solid.

Wish i had made a vid of when i added the x axis mod it was a lot easier than i thought and required no disassembly took about 20 minutes. slid carriage to one side removed right y axis wire slid in steel lined up and clamped and drilled. good drill bits are the key here.

was thinking of about the same thing but was going to use steel box tubing due to it being a local item and cheap.

I’m using the bolts-through-the-center version right now and it seems to be working fine, if a tad on the tacky-looking side. I’d rather have the steel spine or aluminum T-angle version of the mod. I’ll likely implement that at some point, when I have time to pull it apart fully.

I’m not one to care about looks it’s all about function. If it works then it works and in the end that is what matters.