What's your definition of a clean cut?

Sup gang? I’ve done quite a few projects since I got my 1000mm xcarve. ive made lots of mistakes, and had many successes. I just did my first acrylic piece, and now I plan to do some stacked text and raised lettering.

So here’s my beef: In this example i’m using pine wood. I’ve read for countless hours what people do when carving…well anything. And all too often I read people say it cuts clean. What’s your definition of clean? i’ve had a few jobs come out looking like crap because the beveled edges were torn out. This is because rather than using my standard 30in/m max 1/16in per pass method, i tried using others 70+in/m.

The reason i’ve tried using a faster speed is because while 30 is working for me, i see everyone else doing something different. And 30"/m still gives me, what I call tear out. Below will be some examples.

Why I bring this up now, is with creating some stacked text, I’m worried that the finish stain or paint is gonna be a nightmare if i have to do extensive sanding on the beveled/cut edges…if you take my meaning.

m i just being too picky or have my expectations too high?

Here you can see the tear “fuzz” 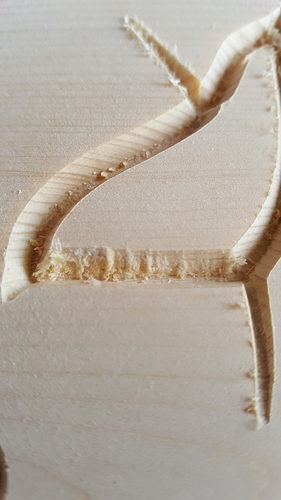 Here on the left you can see an all too common effect for me. tear out. 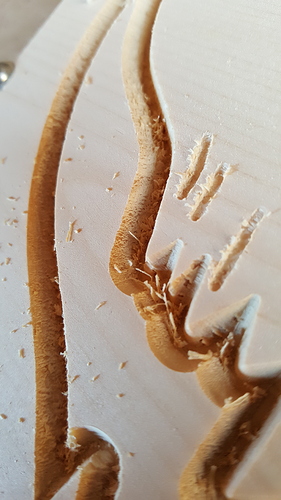 these were my settings for the above pics. 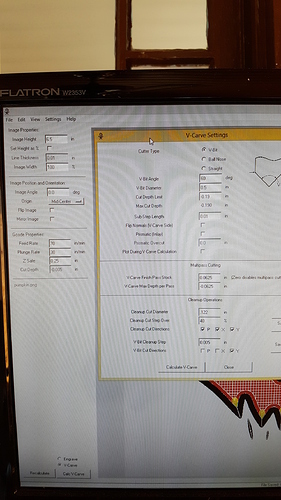 Whether you’re using a CNC router, a hand held router or carving by hand, there is no ignoring the grain of the wood. Cutting wood is like running your hand across your carpet - on direction, all the fibres ‘stand up’ and in the other direction, they all lay down nice and smoothly. If you look at your pictures, you’ll see how the problems you’re having are largely dependent upon the grain direction.

When hand routing & hand carving, you can alter the direction of your cuts to allow for the changing direction(s) of the wood grain. With a CNC, this is almost impossible (or at least it’s largely ignored by most of us). All you can do is to try and keep as many things in your favour as possible,

I’ve read (but never tried) of different strategies for reducing ‘tear-out’ when using thicknessers (planers) including lightly spraying the wood with water - not sure that this would apply to CNC cutting and I’ve read of folk who’ll lay down a coating of something hard like shellac or even cyanoacrylate (instant “superglue”) over the surface to harden it before cutting. Not sure if this would be effective or not, but I guess it’s plausible…

Use sharp tools. Kinda obvious, but that favourite bit you use for everything isn’t going to last forever. Sharp bits will cut cleaner and will generally leave better edges. Your example above looks like a V Carving - if so, I bought one of these (http://www.toolstoday.com/p-6015-in-tech-series-insert-v-groove-router-bit.aspx) and have been amazed at how well it cuts. I’ve used it on hard woods, soft woods, marble, and soapstone and it’s performed flawlessly. On the rare occasion where my cuts haven’t been super clean, I’ve simply run the same tool path a second time and it’s cleaned up really well. I never have to sand V carvings at all.

On general carving, I use a 6mm downcut spiral bit. It’s fast, cuts cleanly in pretty much everything and has been my go-to bit for nearly everything.

Nothing new here I know, but though it worth mentioning. Hope it helps. 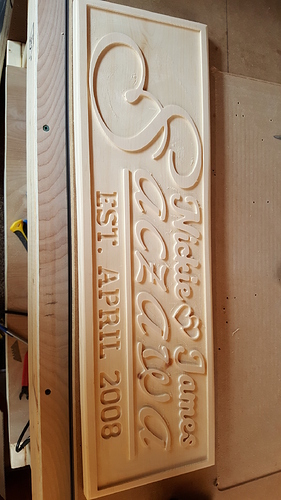 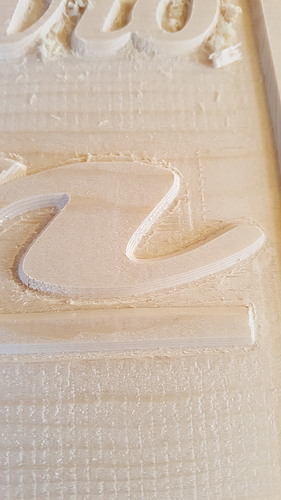 So now im getting this. This is my second attempt at this sign 6 hours later…dont know how to stop it

Looks like your spindle may not be slightly out-of-square with the wasteboard. Try cutting a shallow (.030" or so) pocket with the widest flat end mill you have, preferably 3/4" or so, and see if it looks like that but worse. If so, you can diagnose the amount of out-of-square and direction using a video I made a while back: https://youtu.be/5NKmmMKNpOE?t=9m5s

So here i did the old spindle adjustment.

the left square was 4 inch and had a maze pattern so i adjusted left/right and front/back. the middle square is 3 inch and i seemed to nail the front/back but the left/right was off still. then the right square was 2 inch and came out pretty darn perfect. 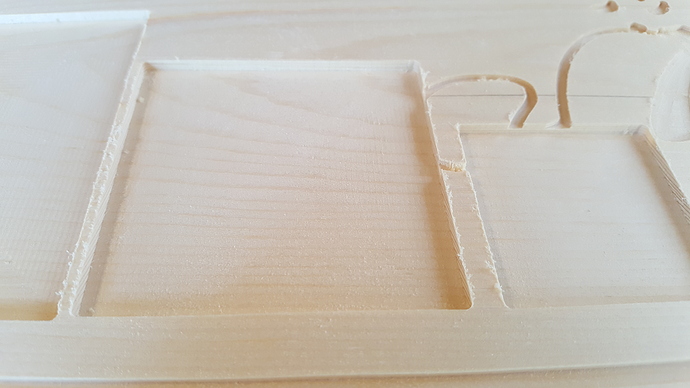 double checked with 3/4 flat on mdf and was satisfied enough. 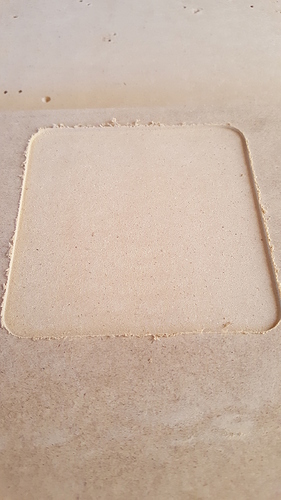 then i got this crap. 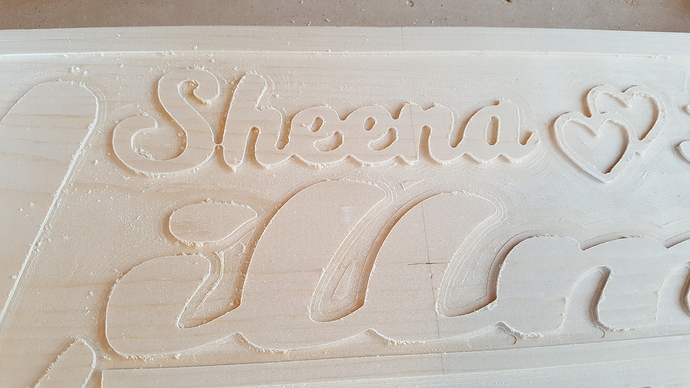 the inside of the H was perfect but all around the rest of the board was pooched. 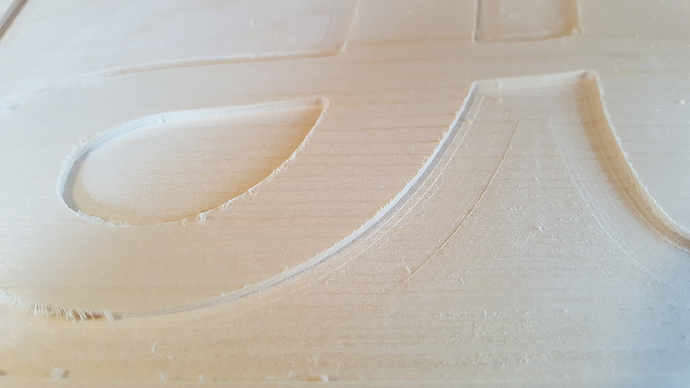 WTFBBQ. the board had a slight wow to it, could my board be flexing in the middle or something? i dont have the 1000m waste board, i made my own, but im certain it clamped sufficiently around the edges. the piece size was 24 x 7.25.

needless to say i ordered the wasteboard…

Have you tried using separate roughing and finishing :