Why did this happen in Easel?

I cut out a whole project with 2 words and an elliptical border. Half way through, the bit took a weird path and cut right through the middle of the letter “R” in one of the words. It only did it once. Each other time tracing around the letter, it took the proper path. Why would this happen. I’m using easel 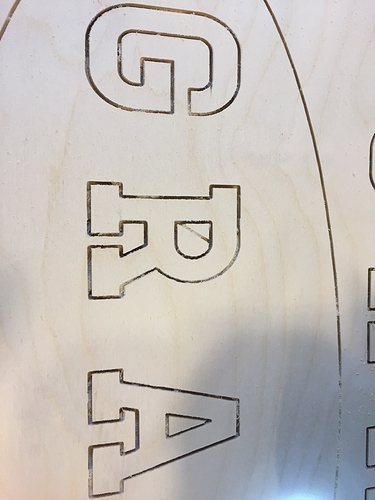 Did you stop it after it did that, or did it make another pass? Are the cut depths the same? Did it return to the same home point? What setup (size, spindle type, etc.) are you using?

If everything cut correctly after that, but the depths are too deep, you likely lost steps on the Z-axis. It could be a lot of other things though, we need more information.

I was using a 1/16" up it spiral bit mounted in a dw611. I let it keep going and everything else seemed fine. It made several rounds as it was going deeper each time, but only took that path once. The final project wasn’t cut completely through, but I think I didn’t set the material thickness quite thick enough as I was cutting the letters completely out. I also may have issues with the machines table sagging/and or I need to do the stiffening mod on my x-axis. Like I said, im running e dw611 but haven’t added any stiffening as yet.

And I was cutting through 9mm Baltic birch ply.

I wonder if the collet was a little loose, the upspiral bit would tend to get pulled down a little bit if it snagged on something. Did the next round of cutting sound rougher than the previous round, like it was cutting deeper than before?

I have about 1/32" of sag in the middle of my table, and haven’t stiffened the Y axes yet. I don’t see sagging or lack of stiffening being an issue with you though, I’ve heard the 611 should rip through 9mm ply like nobody’s business.

I don’t think sag or stiffening is the issue. They’re all through cuts, so it wouldn’t matter that much for this project. I never noticed the collet slipping or that the next cut was rougher. I watched the next passes around the “R” and they seemed ok, and the bit never took that same path of cutting through the “R” again, so even if the bit moved, I still don’t know why it slashed right through the middle of the “R” that one time only. Still being new to the machine, I think I may be over tightening the collets if anything, so I doubt its slipping. And I looked after it it still seemed to be in the same place.

My x-carve did the same thing on a project I was working on. It took off and ran down at a 45 degree angle through a letter, don’t know why it did and it only did it that one time. Maybe a bug in the website or something like that?