Why did this happen?

My stock spindle on the x-carve crapped out. Rather than try to get another one I just installed the DeWalt 611. It did three passes fine then this happened. (see link to watch the video). Why did it happen and how can I prevent it from happening again? 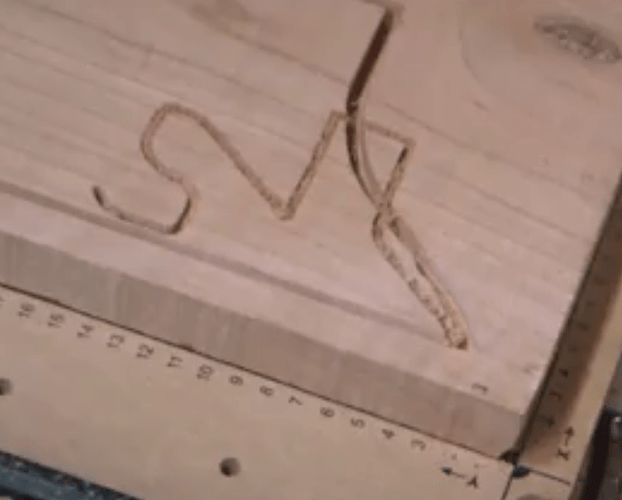 It sounded like the stepper motors were skipping - maybe from getting hot or the drivers getting hot and going into shutdown.

Just looking at the video it appears the power cord for the 611 is constantly pushing/pulling on the stepper motor cables. The connectors on the Grbl board are not the most secure so I would reroute the 611 power cable so it never touches the other wires. Not sure if this caused your problem but it will certainly cause problems at some point.

How do I prevent that from happening in the future? It had barely been cutting for 10 minutes or less. I did 7+ hour projects with the stock spindle

Thanks guys. I’ll keep trying stuff. I appreciate the responses. Strange though…it started to cut a miniature version of the design lol.

I want to know how you refrained from using strong language when the spindle decided to go off a little joy ride,

My favorite past time now is thinking up new swear words to yell at my machine when it ruins a $20 piece of material. Usually it is just doing exactly what I erroneously told it to do, but yelling still seems to help,

Lol, well sadly, I’ve gotten used to crap going wrong so I just sigh, shake my head and turn off the camera…THEN cuss

Oh, Please leave the camera on next time, I am working on a dictionary of "colorful " language! LOL

On a more serious note, what about the possibility of electrical interference from the power cord of the 611? As well as the physical contact mentioned earlier?

If you have one more 24V power supply, you can connect only stock spindle and it works. That’s what I did for a month waiting 611 mount. At least you can carve while you’re waiting.

The extra weight of the dewalt may require turning up the voltage on the shield a bit. When I went to the dewalt I had to.

You may want to screw some terminal barriers strips down to your table beside the power supply and then use short cables from the grbl motor connectors to the the terminal strip. Then connect the steppers to the other side of the screwed down terminal strips. That way you isolate the “fragile” connectors on the Grbl from any pulling or movement caused by the X/Y motions of the machine.

I was having all kinds of problems before I made that change, I think it makes the wiring much more robust.

Here is what mine looks like after I spray sawdust over everything. 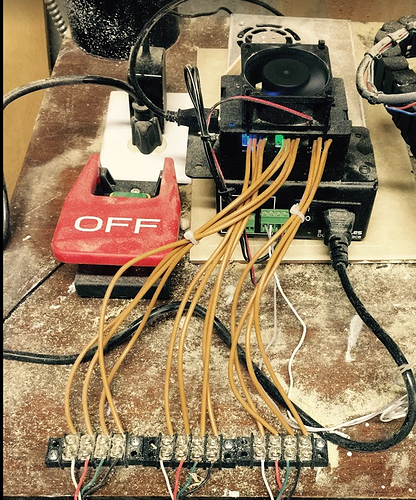 slipping pulleys is my guess

ANs a handy fingernail trimmer too! (Lack of a fan guard)

Wow, that is weird Charles! So, it made some full-size passes, then it decided to reduce the whole project to about 10% of actual size and cut out a miniature version of the gun rack? That sounds like some kind of software thing. I think a belt, pulley, or other mechanical problem would make the cut go off-course some, but not cut an exact tiny version of the gun rack shape. Hmmm

a slipping belt or pulley would cause it to do this actually. if you think about it the machine is still trying to cut the correct shape but if the pulley/belt is slipping the machine isnt going to move the full amount so its possible long movements will look shortened and curves may look flat.

if you look at his video and picture you can see where the router should have been going along a curve it went in a straight line along the X. then where the machine should have went in a straight line along the Y for ~4 inches or so it only went for 1 inch. also watching the video you can see the machine stops moving in the Y direction and starts jumping

It sounds like Charles needs to make sure all of the set screws on the motor pulleys are tight. Then, secure the ends of the belts so they don’t slip and tension them. I wrapped electrical tape around my belts to keep them from slipping, but have seen others use zip ties or heat shrink tubing. And keep the power cord out of the way.

The culprit was 3 very loose V-wheels. Belts were slightly loose so I tightened those up too. I don’t have any heat shrink, so I’m gonna use tie wraps I guess. Probably going to tie wrap the power cord of the DeWalt to the drag chain too. Thanks guys.