A quick word of warning with those using the stock Z axis: too long of a screw on the ACME pulley will cause it to hit the bearing retainer screws. I used 8mm screws and every stepper pulley was fine but the ACME pulley was not. I ended up changing the bearing retainer screws to be shorter to use the M3 socket screws. You could also use a shorter M3 screw for the pulley.

While putting mine together from scratch it occurred to me that there were many places where a regular 'ol hex head bolt would have been more appropriate than the allen headed screw that was provided. Allen screws may have their place, but in general I don’t much care for them.

I replaced all the button head with cap screws in the first week after assembly.

M3 is very bad in aluminium. on all my pulleys I drill them 3,2mm and re-tap with M4 thread, the tightening force is double of M3 and the chance of ripping out the threads is less.

I agree. None of mine have stripped.

You guys just have to use more BLUE LOCTITE!

The x carriage I had to use 6mm long ones.

Those have a patch so loctite isn’t needed. I bought the same ones just the 8mm length.

I like to use patch screws when I can.

No, not yet. What I wanted required 1000 pieces ordered (only wanted one). I would call their “1-800” number first, for customer service as well as tech support, and see how well that works out. Rotsaruck

Anyone ever buy from Ali express?

I bought some LED strips through them. Everything worked out ok. I had a small problem with the order and the vendor I was working with called me twice from China to get it worked out.

Did you notice the 60 days - on time delivery?

Use me, abuse me… some other song lyrics

I just fitted 8mm to X and Y with no issues.

I did nearly the same thing, except I found some shorter pan head screws at Lowes that fit and the threads didn’t stick out.

I need to do this before mine loosen up.

From what I’ve read in the thread these Y axis pulley pan head screws (shown below) are 10mm long. That seems excessively long. Would 8mm screws work? Possibly this is what Justin was referring to when he mentioned 8MM? 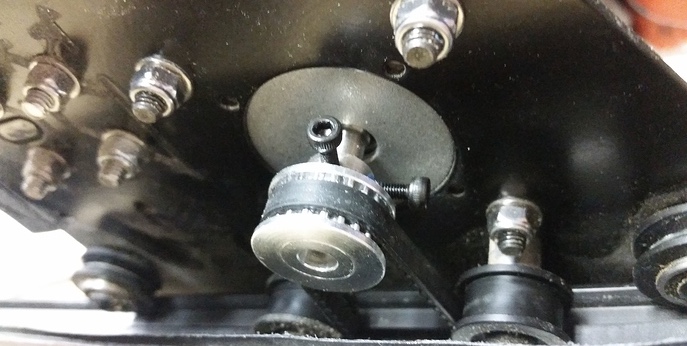 Is 0.5mm the correct thread pitch?

Would 8mm screws work? Possibly this is what Justin was referring to when he mentioned 8MM?

I used 8mm socket head screws and they stick out similar to the picture you posted.

They weren’t an issue for the X and Y axis but I did have a Z axis issue with the screws hitting the screws for the bearing. I changed my bearing screws to shorter screws before I upgraded to the linear Z axis.