I took some inspiration from @RobertCanning’s WiFi cabinet door, and thought "Wouldn’t it be great to have a nice little thing that had the wifi SSID and key on it so that when guests come over they can join the network easily?
(I used to have a separate “guest” network. It was more hassle than it was worth)

So I’ve come up with this: 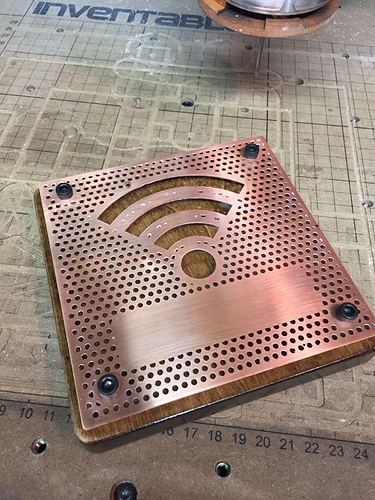 It’s .5mm copper, with a base plate made of 3/4" maple that I stained “Honey” and then put PolyCrylic over. The hardware is 10-24 x 1" socket head screws going into flat T nuts on the back. 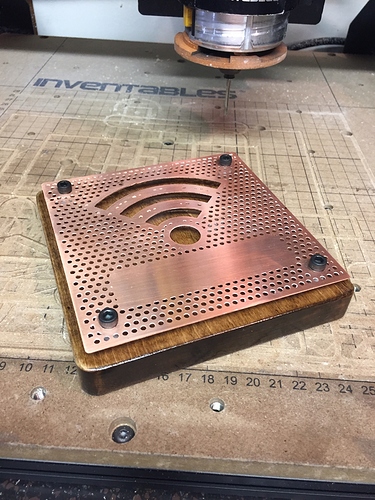 I wanted to use the same kind of insert screw as we got with the wasteboard but I’m impatient and didn’t want to order them from Inventables. I got the brass ones with a slot cut into the top but they tore up the test piece I drilled and then the slot broke. These T nuts will face the wall so nobody will ever see them. 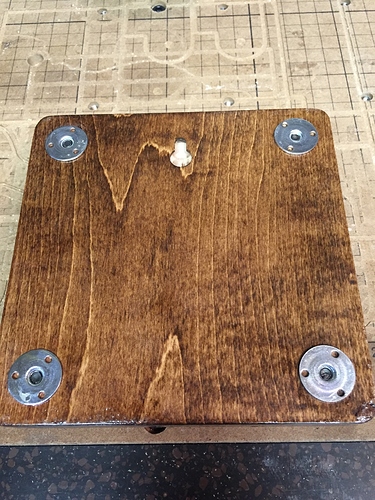 Eagle-eyed viewers by now have noticed the keyhole slot I cut to hang this thing by. Yes indeed I chucked that bit into the DeWalt spindle and cut it on the X-Carve. I manually entered the gcode one command at a time into the console window in Easel’s machine inspector.

(I’d have liked to have written this gcode out and just ran it, but I have no confidence that I wouldn’t have caused some damage, and plus I hadn’t installed UGS on my CNC 'puter since upgrading to an SSD and fresh-installing the OS.) 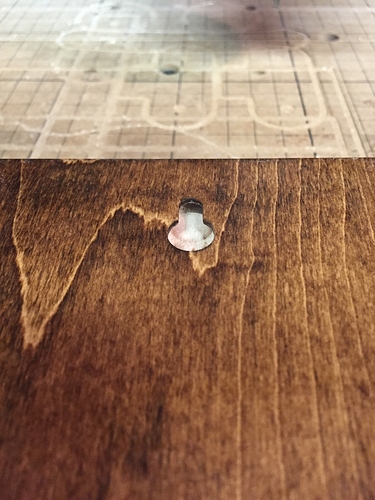 The next step will be to print out the SSID and key on a clear label which will go in the blank space on the copper placard. No I’m not going to take a picture of my SSID and key. Nice try.

The copper took about 2.5 hours to cut, I used a 1/32" 2-flute upcut spiral bit running 500mm/min at a .05mm DOC.
By the way, Easel will round your numbers off to a tolerance of .1mm in the dialog boxes, but the gcode it generates respects your input. Test it out on the “show toolpaths” function. This is a big deal for cutting metals with small bits. being off by even .05mm is enough to break a bit quite easily. That white stuff you can see in the holes is teflon powder. I tried using DryLube which is a spray-on PTFE lubricant. It didn’t really help much and made a terrible mess. I’ll probably end up taking this apart and washing that copper placard really well in some hot soapy water.

The maple was cut with an 1/8" straight-flute bit at 1500mm/min and .5mm DOC. It took a while, and I could have been much more aggressive with my numbers here, but I didn’t want to take any chances.

The materials were mostly free to me, they were bits of stuff I had laying around. The hardware was maybe like $5 total.

OH! I’ve been doing these wrong for years! Thanks so much for this great video!

Of course, I’ve already sort of obligated myself to using the T nuts, and I broke one of the brass ones anyway.