I recently purchased a Dewalt DWP611 for my in process X-Carve build. I noticed that some people recommended using solid state relays to turn the spindle on and off instead of doing it manually. What I am missing is how to actually wire the route to the relay and into the controller. Can anyone help me with some practical instructions on how to do this? Do you just cut the wall plug off and put those wires directly to the relay? I’m sure the process is not difficult or complex but I don’t want to start hacking things off my router or blow something up without proper guidance. Any help would be appreciated! 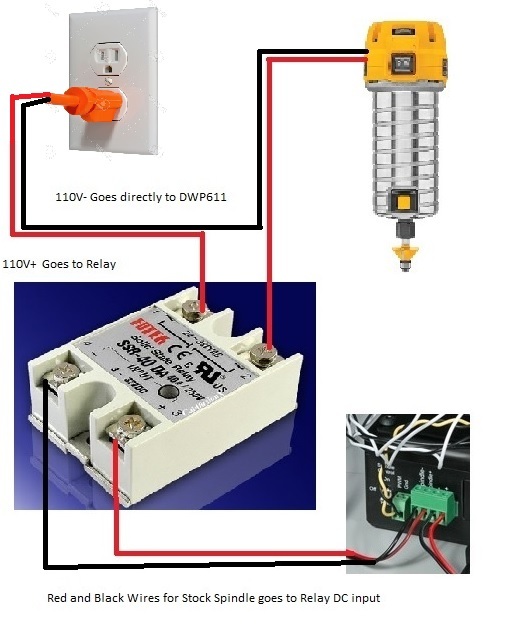 Thank you AlanDavis, I appreciate the diagram! I noticed it posted in at least one other thread but it was still not clear how to apply it directly to the X-Carve. I was laboring under the assumption that the router was going to be tied into the power supply like the stock spindle would have been. After I studied your diagram more carefully and remembered that the stock spindle would have been 24V DC and the 611 is of course AC, things became a lot clearer!

Thank you very much for the quick response @AlanDavis
Much appreciated.

Hi @AlanDavis
It arrived today, Bigger and heavier than i thought but looks well made.
Here is a picture, I take it that it wires up exact same way as your relaywiringnew.jpg?

This is exactly why i went ahead and ordered a x-carve over a Chinese cnc a few days ago. The abundance of help on this forum along with the willingness to help novice newcomers like myself.
Thanks everyone much appreciated.

I implemented my relay by mounting the relay and an outlet into an “old work” 2-gang electrical box and then mounting that in my CNC cart. That way I didn’t need to cut the router cord and I could also plug in my shop vac into the other plug and have both controlled by the relay. I used sectional wall plates so that the outlet is on one side and a blank plate on the other side. I can post more pics of my setup if you like. 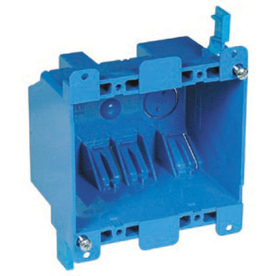 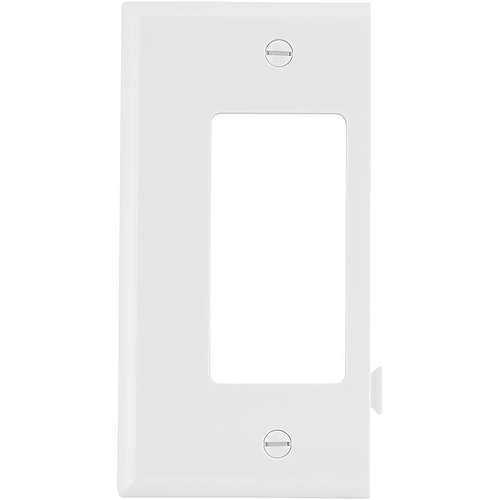 I bought something similar to this years ago.

Bought it for my Ardunio when I was first getting into it, but never used it. I think I will have to dig it out and use it with my X-Carve! Is there any disadvantages to using this style relay over a solid state?

But with everyone using the higher capacity solid state relay for their 611’s, I’m beginning to wonder if I’ve missed something!

Agreed, I’m not super versed in the world of relays, but the only thing I can come up with logically is that a solid state would be more reliable and have a longer life span. The thing to consider now though, if those are the advantages, what is the cost benefit of that? For a small business / hobbyist is that extra life and reliability worth it?

I don’t think that the solid state is priced that high, I have found them for about $4-$5, but hey I might as well use what I have on hand!

There is no special reason to use that heavy looking Solid State Relay other than PRICE. Those Mechanical Switches Inventables sells are $7.50 Plus shipping and needs special plug inserts for connection and cover box. The relay I suggested was $9.70 with free shipping, requires Phillips head screw driver to install.
It is more than enough, a little over kill. But if people wants to run Dust Collector and Router on same time, there is enough amps tolerance. I think the best choice is cheaper ones without worries. M2c.

I’ve been using this one for months with no issues:

For those that are trying to use AlanDavis wiring digram of the solid state relay should note that on the router side of the relay the wires will be black and white. Also when working with a/c power the black wire is the hot/power side, so the black wire on the router side should be attached to the relay. Everything else in the diagram is correct. Hope this makes your installation easier.

You shouldn’t use the “lower” cost relay for the following reasons:

A solid state relay has no mechanical parts, but rather uses an opto coupler, (LED and light sensor). It switches on at the peak of the AC voltage sine wave, and off when centered in between peaks (No voltage). It is a difficult subject, but to keep it short, it will last much longer and by “Clean switching” motors, transformers and other devices with them they too will last longer in theory. Mechanical relays do not switch clean. Be careful with the 25A rating too, the relay will heat up significantly, and any shorts in your equipment will cause it to fail in the ON position unlike a mechanical relay that will blow out, turn off and not turn back ON again.

Instead of switching everything on with one relay, consider this: Have one SSR for each device, then use low voltage circuits to switch the devices on through the SSR’s. You can run thinner less expensive wiring to all kinds of stuff in your shop, and control it from one or multiple locations if you want; When I turn on my router, the blast gate opens to the dust collector, the dust collector fires up, and the router turns on, with end switches and LED’s of varying colors to indicate what state the devices and parts thereof are in… I can use a foot pedal to start machines or front panels. There are safety switches, LED lighting, digital readouts… All low voltage and inexpensive parts, on every machine running off of one single very good but not cheap 15V power supply. I do have an extra 110V AC socket on most machines that I can use a mechanical switch to run it off of the SSR (remote) to turn on a shop vac for some of my jigs, or switch it to manual (ON), and plug in a soldering iron or other device to use while the machine is off. Then I can go to the drill press or table saw and do the same, and someone else can run stuff simultaneously too, without overloading an SSR.

What did you expect, I am from the Glendenning bloodline!

You have a CNC router and a dust collector, what else do you need? SSR’s do not create sparks like standard relays, so you can save the two for when you build a spray booth!

The Fotek 25A or 40A SSR and also other SSRs have a minimum load current that must be present for the SSR to work. Typically 100mA. What happens to the SSR if it is activated from the DC side and nothing is connected on the AC side or the router or other tools are OFF?
Will this destroy the SSR or just not activate it?
It is reccomended to use a dummy resistor over the AC load to be sure of minimum load on the AC side. What type of resistor should be used. 240VAC and 100mA should give 2400ohms resistor?
I guess this would produce a lot of heat too?

I have a mains outlet connected together with my SSR. If I do not plug anything into the mains outlet, what will happen?

Could I use something like this and connect it directly to the N and L on the mains outlet to make a dummy circuit?

The DC side and the AC side of this relay are isolated from each other by an opto-coupler. So, short of catastrophic failure the DC side is not affected by the AC side.

I don’t think it would hurt to leave the AC terminals open. This SSR is a zero crossing switch, which means that it turns on and off when the voltage is at or near zero in the AC cycle. The 100ma minimum current is most likely the point where the relay is guaranteed to turn on or off, hence the 100ma requirement. Since you don’t care whether it turns on or off when there is no AC load, I think this would be a non-issue for you.

I will look out for a resistor.
24W means a lot of heat. Resistor with heatsink maybe?
I’m not sure if there is any more space in my box for this.