Wooden clock, and a question about clock mainsprings

Hey everyone. I was going to wait until I had more progress to show this project, but since I’m having a bit of difficulty with my first cut I figured I’d both show progress so far and ask the question.

The design is Clayton Boyer’s Deco, which is a spring-driven mantle clock. After messing with Fusion360’s CAM settings for a while I sent the full sheet of 1/4" thick wheels through today: 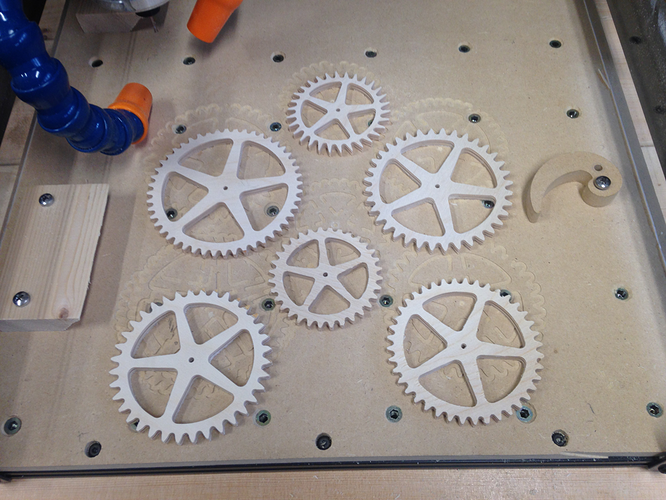 Generally I’m happy with how the wheels are turning out, and I think they’d actually be usable as-is. But I’m not happy with the amount of tear out that I’m getting: 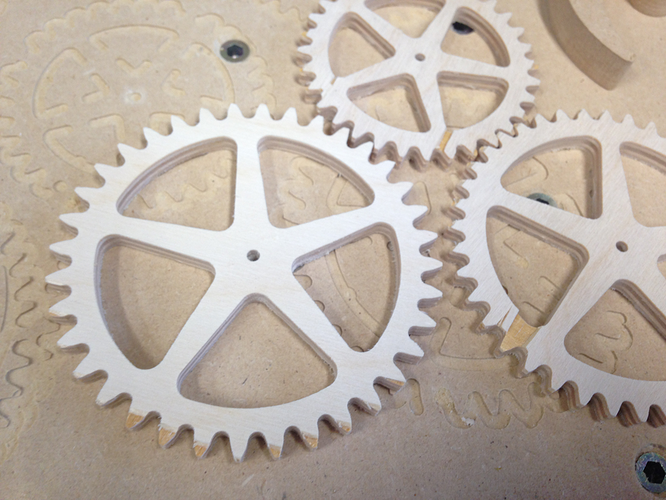 The plywood is nice 1/4" Baltic Birch from Woodcraft. The bit is a 2-flute spiral downcut bit. The tear out is happening on the top, not the bottom, which has me rather perplexed considering the bit I’m using. I’m taking each pass at 2mm deep, 1000mm/m, and doing a 0.1mm step over for the finishing pass. The tear out happens on both the roughing and finishing passes to about the same degree.

Am I taking the cut too fast? Too slow? Too deep? Do I need to upgrade to Finnish Birch plywood, which has twice as many plys and also costs twice as much? Any other ideas on how to minimize this tear out?

Is the outside profile cut toolpath moving counter clockwise around your gear? Also be sure the router speed is low (1 or 2).

Yeah, it’s going counter-clockwise. I have Fusion setup for a conventional cut.

Really, that low of RPM for plywood? I had assumed I needed a higher setting for ply. I’ll try backing off the spindle speed and see if that helps.

Other than that little bit of tear out your gears look really nice!

I assembled a wooden clock kit years ago (all the gears where included and had been laser cut) I had to cut everything else on a scroll saw. If I had my X-Carve then it sure would have made things much easier.

Did the plans you purchased include vector files that load into your CAM software?

I have been making a similar clock and the problems I had were down to poor quality plywood and going too deep too quickly.

Making a clock certainly highlights any “issues” with your X Carve set up and I have made a few wheels that are not quite round or where the arbor hole was slightly off centre, a combination of errors that will stop a clock running.

@AllenMassey - Thanks. That’s the biggest job I’ve sent through my xcarve so far, and I’m generally pretty happy with how it turned out.

I purchased the vector version of the files from Clayton. I must admit that they’re requiring a lot more clean up than I had anticipated. The vectors have a small amount of slop in them. It doesn’t help that I don’t have good stand-alone CAM software available, so I’m having to try to clean them up in Fusion360.

@RobertMatusiewicz - I could definitely be taking it too deep too fast. I’ve noticed a bit of chatter in the machine while milling these wheels. Maybe I should just back all my settings off by a bit.

Thankfully so far the wheels all seem to be getting milled to spec, at least as far as I can tell. I setup each wheel to have the outside finishing cut done in a single pass and then have it immediately bore the center hole, to give the machine as little room for error as possible. That seems to be working pretty well so far.

I just found this site that has free plans for several wooden clocks.

You can soon tell if your wheels are cut correctly by mounting each one on its arbor and any imperfection will become apparent when you rotate the arbor. If your wheels are right and the arbor hole is central then there will be no deviation when you spin them.

@AllenMassey - I had run across that site when doing initial research, but I just like the look of the Deco more than anything else out there.

@RobertMatusiewicz - I’ve tested them by just tossing them on some brass, trying to secure one end, and turning them. So far so good; they seem to run pretty true. I think the tooling sequence really makes a difference. We’ll see though once I actually start installing them into the real arbors.

Speaking of which, has anyone developed a simple depthing tool yet that can be carved on the xcarve? That seems like an invaluable tool for this situation, and it seems like something simple could be done with the xcarve’s precision.

@AngusMcleod - That’s my understanding as well. You could change quite a few things about the design and have it still keep time reasonably well. A significant change to the pendulum length would change all the math for the wheels though, I believe.

I’ve cut a ton of much smaller gears out of really cheap (<$8 for half sheet) thin (< 0.2 inch) plywood. My smallest gears are about the size of a nickel. I used a very small bit 1.25 mm at 20 inch/min and .005 in depth. Admittedly, it takes forever, but I get really smooth gears with minimal sanding without any tearout.

I’d suggest slowing it down and using a smaller bit. Hopefully the time you save in sanding/ repairing makes up for the longer cutting time. 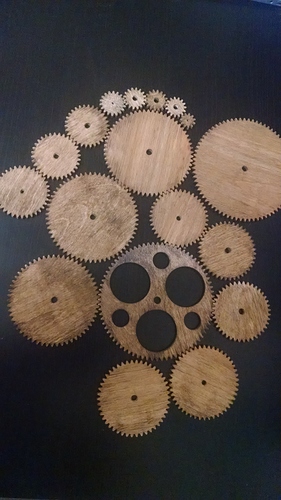 I’ve been trying to get my x-carve set up to cut clock gears also. Specifically the Deco you are making. I’ve already made several clocks including the Deco with a scroll saw but bought the X-carve to make things easier. Unfortunately my gears are not coming out right. Some of the teeth are skinnier than others and the axle holes are not round. Yep, having the same problem many others have had—can’t cut a round circle.
I’ve checked everything I can think of with no luck. I did calibrate my steppers today. The X axis was dead on and the Y axis was only a mm. off over a distance of 600 mm. Could one mm. make a difference? I changed value for stepper but have not tested.
Anyway, be careful, clock making can be addicting!

I ended up having to loosen my belts to 3.1# to lift 1" and loosening up the V-wheels a bit more than I expected before I started getting perfect circles. Try doing that, and try the calibration pattern I made and shared as a project.

There is no doubt that Clayton Boyer has designed some beautiful clocks. I like Deco since it is spring driven, that makes it a much more practical clock.

@MStraus - That’s good information. Thanks. That’s definitely a lot less aggressive feed rate and depth per pass than I was taking it at. I think the ply I’m using it decent quality (definitely better than Home Depot type of stuff), so I must just be taking them too fast. I’ll look at decreasing the speed and possibly running with a smaller bit.

@StanPhillips - Yeah, tuning up the machine can be a bit of a pain. I’ve spent a fair bit of time getting it to behave itself. So far though these wheels do seem to be pretty accurate other than the tear out, so there is hope. When I took my digital calipers to them they were definitely within tolerance (either that or these clocks require way higher tolerance than I expect.)

@AllenMassey - Exactly. The spring drive on the deco was one of the big selling points for me. Be aware though that the seller that Clayton recommends for the spring uses no security on their online store. Rather than risk it, I bought a similar spring from clockworks.com. It remains to be seen if the rough match will perform with minimal adjustment to the design.

With that I go 1.4mm doc normal step over and up to 1300mm/min. And I get very minimal tear out in oak plywood. Top or bottom.

I cut out the 1/8" pieces today with much less aggressive settings (650mm/m feed rate, 1.25mm depth per pass, slightly lower spindle speed). No tear out this time around. It’s not entirely a fair comparison though, since these pieces are relatively simple compared to the wheels though and have a lot less opportunity to tear out small pieces:

Other than some light sanding to remove some fringe these parts seem ready to go into the actual clock. The circular parts appear to be accurate to within 0.2mm, which definitely seems reasonable.

And yes, I’m tearing up my waste board quite a bit with these cuts. Preliminary tests of the cuts were leaving a fraction of a millimeter of ply left uncut, which was making cleaning up the parts majorly painful. So I increased the depth of the cut to be sure I punch through. Better to cut the waste board than not cut the parts all the way, I figure.

Is your wasteboard leveled? If you level it with a wasteboard cutter, you can set your cut depth just a hair deeper so you’re only scratching the wasteboard instead of making such large cuts into it.

@RobertA_Rieke - I definitely have a leveling issue, but I’m not yet clear whether it’s the wasteboard or the board itself. I know the 1/4" piece I was testing on had a tiny warp in it that was causing me problems. But yeah, you’re right, I should take the time to level it now. It will probably pay off later with accuracy.

@AngusMcleod - True. Though leveling it still wouldn’t be a bad idea, from an accuracy standpoint.

So here’s another question to put out there for you guys to help me think through. The clock has these frames that need to be cut out of 3/8" ply: 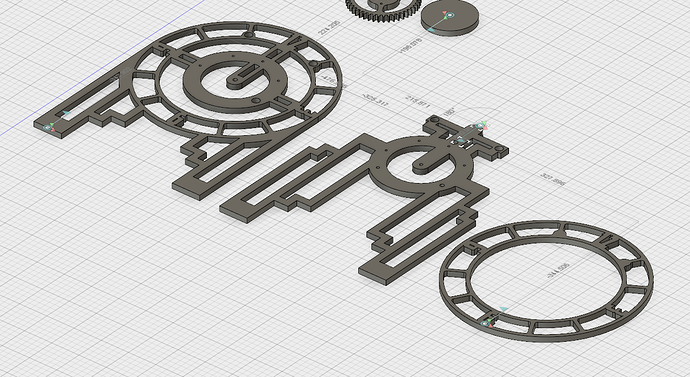 The clock face is 12" by 12". I could maybe get the clock face done in a single cut if I remove my dust covers and really push the edges of my 500mm machine, but it’d be tight. The two frames though that include the legs are much bigger than my machine allows. I’ve been tossing around a few ideas…

If I had a scroll saw available I’d toss them on there and do them by hand, but I have no such tool available to me right now.

I could break the frames into several pieces and cut them individually, but I’m not sure how I would piece it together. I guess I could just go with a gorilla glue, or epoxy, or some other glue, but because these are structural I’m a bit hesitant. I was considering using dowels to hold the pieces together, but I’ve actually never really done dowel joinery. I do have a decent drill press available, but I don’t know where to start.

And my last idea was to do a 2-part cut and trying to devise a registration system to move the wood between cuts. That just seems like it’s asking for pain though, since the wood is rather thick (translation: expensive) and any small bump to the machine could throw it out of alignment for the next cut.

So, how would you guys tackle this cut?

Just add a secondary wasteboard to the top of it, then you can screw all your material down.