I’m getting more and more frustrated with my x-carve. I bought the x-carve thinking 2-3 weeks full time would be enough to work in and calibrate the machine, but every day I run into a new problem.

I was working on PCBs, which require precision at the limit of what the x-carve can offer, and for that reason I was indulgent on the shortcomings of the machine, but today I carved a 1" x 6" x 0.5" slot in MDF, and there are some visible problems : 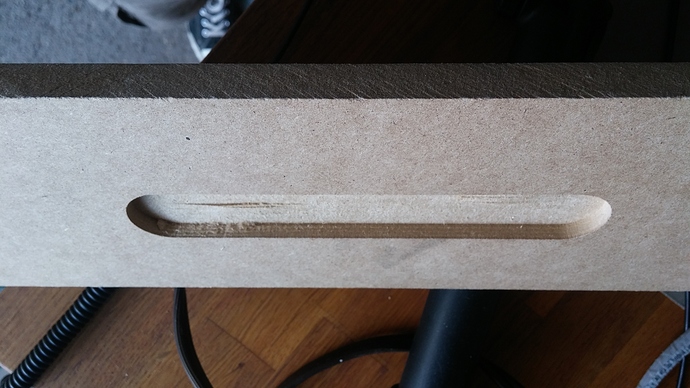 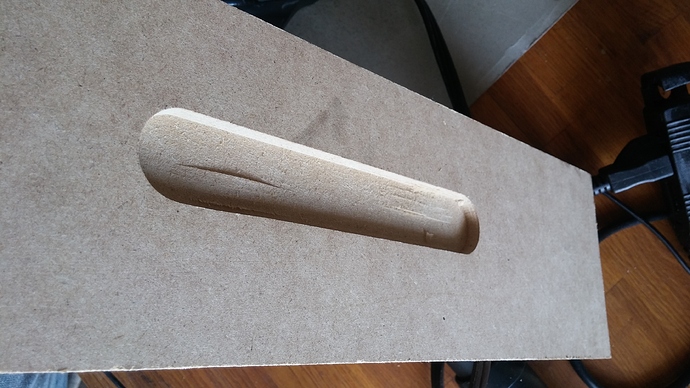 There are two “ramps” on the bottom of the pocket (the bottom plane should be flat, per design and fusion 360 output). It’s like the Z axis was somehow pushed up.

I’m hoping I can get some pointers here, or at least some moral support. Have a I bought a problem? I was hoping the x-carve would allow me to move forward in my projects (pcb, cases, fixtures), but I’m starting to get very worried.

First check your delrin nut. (the most likely culprit.) and the V wheels. (I keep having problems with the lower Z axis eccentric nut on mine.)

When cutting MDF very thin strips with chip and tear out, so it is possible that the little ramps are not where the Z got bumped up but where the X / Y didn’t overlap properly and left a gap between, but most of it got “torn” away. (a long shot but worth mentioning)

I have disassembled my z-axis. The delrin nut seems fine. The acme rod doesn’t turn concentrically, but I’m out of time to evaluate the reason. Might not be the acme rod itself - The nut at the top of the pulley seems weirdly crooked. Will look into that.

I had a similar problem a while back, it was not the delrin nut as I expected. The problem was caused by a bit of looseness in the nut on the top of the Z axis. I tightened it up and the uneven cuts on the bottom of carves went away. It was a bit fussy to get set right, too tight and it seamed to bind against the bearing, and too loose and there was slop.

I think I got it fixed.

The delrin nut was fine. I disassembled my z-axis, took the acme rod and delrin nut alone and I got smooth action with next to no play.
The rod itself was fine too. Rolled it on a straight surface and saw no warping or anything.

The nut on the top of the rod assembly was not fine : 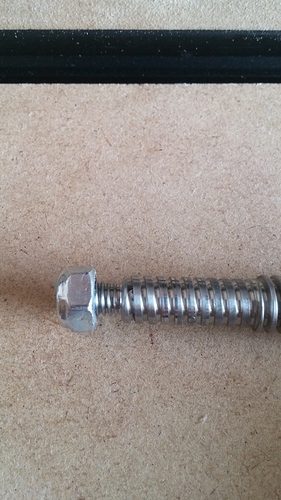 It’s still not clear if the nut is the sole culprit, but clearly the rod had a lot of runout with it, straining the delrin travel nut quite a lot. I replaced it and after a lot of trial and error, decided to also add a washer between it and the pulley. This seemed to prevent a lot of the rod runout. 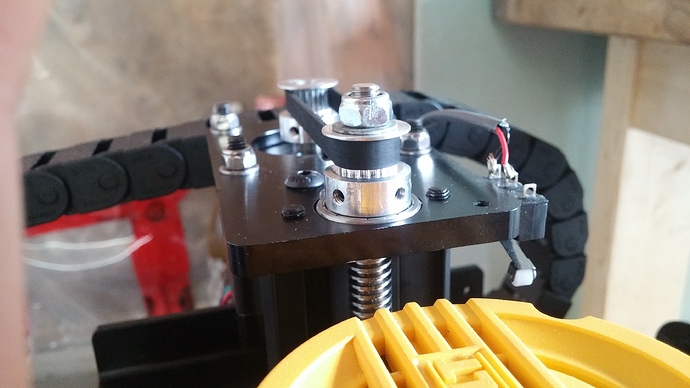 I also shimmed the z-axis pulley : 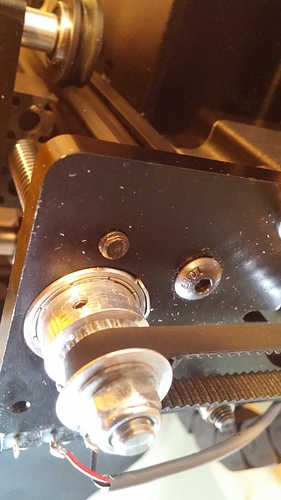 I can’t tell out of doubt which of these modifications solved the problem (too little time to try everything in isolation), but in the end I could see the rod ran way more concentrically and, with the router, my test carve (same slot as before) came out good :
Uploading…
Will update if I run into the problem again.

If I can make a suggestion, create and cut the same slot in Easel and compare the results to what you most recently imported from Fusion 360. That will help you determine if there is any error from the programming side.

I don’t think that’s a good use of time. I can see the gcode has no Z components that could have created this pattern, and the same code worked good after the mechanical fix.

Just a quick update, for those playing along at home :
After a z axis crash, I’ve had problems again so I’ve
-taken out the z-axis bearing shim. I think it was doing more harm than good.
-adjusted the top nut and pulley screws AFTER properly aligning the carriage.

Runs better now. I can see the bearing moving around in its socket a little, and I think that translates to some “travel runout” (if you will), but I think that’s allowing some imprecision to “correct itself” somehow. Anyhow, that’s just a theory, but the bottom line is the axis is smoother, makes no weird noise and seems fairly precise.

What bothers me is that the delrin nut should not have been one but two delrin nuts.
One on top and one on the bottom of the bracket.
Also there should have been another bearing on the other end of the rod.
This single nut idea with no support on the bottom is ok for 3d printers but not for something heavy duty that has a lot of vibration. I too will be changing the Z axis out for one like Phil mentioned.

I too had issues with Z and now are fixed due to the simple addition of a washer below the lock nut.