WTF.... About to Burn this thing down!

Yeah I’ve tried everything.
Done everything tech support told me to do, waiting for another reply to whats next.

is the e-stop on?

lol done all that, even downloaded the com driver update sent from inventables.

It’s not, I’ve been running my xcarve for some time now since june and now all of a sudden Im having a heck of time with my connection issue.

Are you running a VFD or any other high current tool around he computer. I had the same issue when I set up my spindle. EMI is a very real thing. I moved the VFD to the other side of the machine and he problem went away.

well the pc is 4’ away from the router and the only thing closest to the xcontroller is a power strip. You think that may be the culprit?

You really have to change them out that often? why would something fail like that so dang much?

It’s possible. Not sure how probable. Depends on what’s plugged into it I guess. Move it as far away as possible. I know a vfd will cause that exact problem. I would try a powered USB that’s remedied some others USB problems.

alright… I posted another post… thinking I may have a different problem… turns out we both may have the same problem…I have had issues all day with my machine moving in the wrong direction in the raise bit part of the carve screen… now I am having the com3 error as well.if I reset the x-controller a few times the com error goes away… but then the x axis wont stop… it I press right arrow… and it will keep going in that direction

I tried to post a picture but… whatever… I am right there with you. I got the xcontroler last year… took me this last year ot have to money to buy the rails…belts… and such… this last three weeks got everything finished put together… surfaced my wasteboad, was going through calibrations… realized the probe wasn’t set right… so had to go back through the machine setup… and all hell broke loose. z,y, and z if I move them to anouther port… something is wrong in the x axis port of the x-controller… get errors… machine takes off in whatever direction was last moved in… left or right arrow.
I have spend way more time trying to figure out what is wrong with this junk then cutting.

Though not currently an XCarve user, I hang out here to see how others deal with various issues with their machines and specifically controllers. I have noticed that a lot of the commenters have mentioned the USB Cables. Just as in your Stepper Motor Cables, you need to make sure that your USB Cable is at a minimum Double Shielded and preferably has an Inline Choke to prevent EMI from throwing off your controllers signals. Though I ended up going with an Openbuilds design after being totally frustrated with Belt Driven Systems and switching to leadscrews on all axis. We all share the same issues so we might as well all assist each other in our desire to expand this Hobby or Artform to the Next Level. Be it an XCarve, Shapeoko, Carvey or what have you.

1 Like
Usage of limit switches is rather ridiculous as they are never accurate
BrandanTice December 22, 2017, 2:52pm #16

SOLVED SOLVED SOLVED SOLVED!!! okay so inventables sent me a usb cable to bypass the front panel, connecting directly from pc to internal board on the xcontroller. I’ve also switch power sources for the router and wala no more issues, had nothing to do with updated drivers or software posts from vcarve pro 9.0 or easel. Ran the router for 4 hours straight with no disconnect, so relieved now. Hope this information helps and appreciate all the input from you guys.

with out a doubt, the usb and the power interference was my xcarves kryptonite 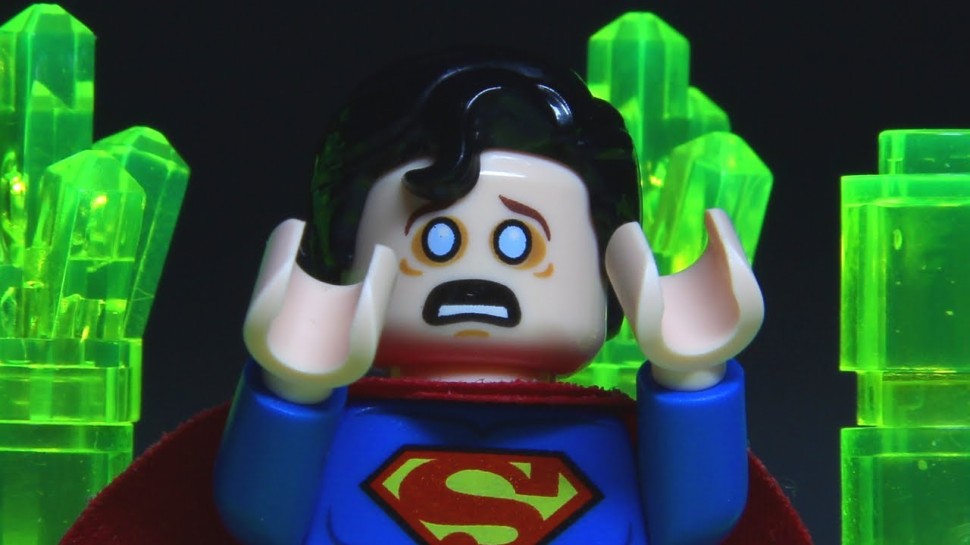 Well as many of you know, I struggled a long time with the same issues.
The best piece of advice I got was to segregate the spindle and dust collector on their own circuit.
if you look closely there are two outlets behind my laptop.
The one on the left is a 15A circuit and the only thing plugged into it are the electronics. (laptop, X carve, second monitor)
The on the right is a 20A circuit and the only thing it has plugged in is the spindle, dust collector, and the overhead LED light
My problems went away and it runs flawlessly. 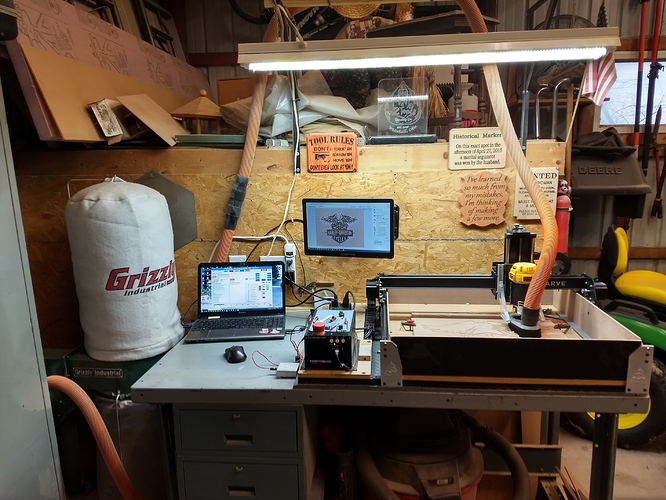 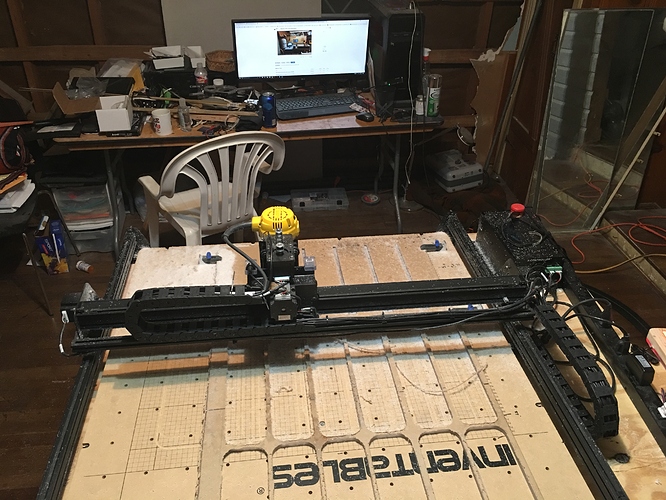 and my house was flooded, hence no walls. (thank you Harvey)

While I truly feel for all of you in Texas (I have a daughter that lives in Houston also)
Shall we call this a little blessing in disguise.??
Now is the time to run the separate circuit.