I actually had a really hard time trying to come up with words to describe my issue however, I come armed with pictures. I have an X-Carve (1000mm) and today I’ve been working on exorcising the demons within. It started with a loose V-wheel then belts, then wiring and, well, now I’m stumped.

As you can see from the picture, each cut seems to progressively “drift” to the right. Is this a problem with the X-axis or perhaps a problem on the Z? I’m using a 1/16" fishtail bit. Feed rate is set low (20) and depth is 0.010.

Any help would be appreciated! 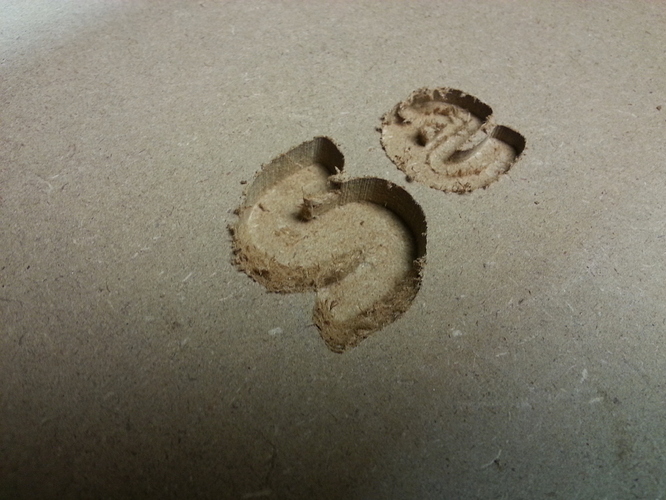 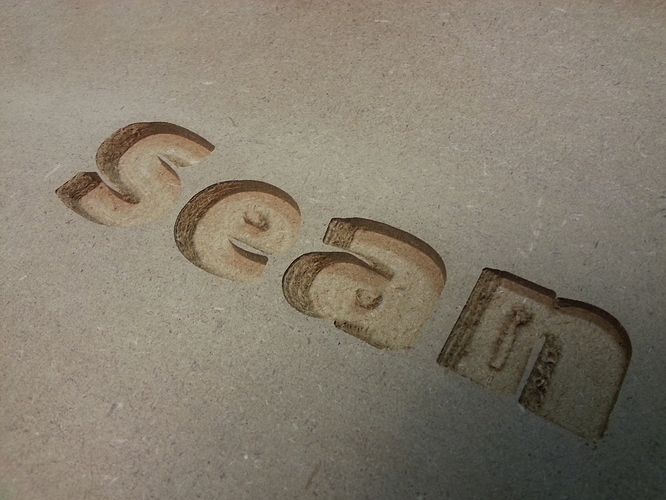 Did you try increasing your stepper powers from pods a little.

I did on the Y which caused other problems. Maybe the X is too tight or needs adjusted?

Sean, after doing mechanical checks, suggest you carve a square to see if it’s only in the X or Y. Curves tend to hide issues a little.

But does look as though the X is drifting due to either too little power, or in my experience, mechanical drag on the X.

You may want to increase the power to that motor. You could try to do something big like a square to see if it keeps happening. Maybe even attach a pen to it and see if you can see it when it draws. Attach a pen, have it draw a square then return to home. Do that a bunch of times, making adjustments in between, until you can get it to draw the same box every time.

Thanks for the suggestions! I’ll give those a try.

I may have over-tensioned the X-belt. It didn’t seem to move as freely as it should. I’m going to set up a square test today.

Missing set screws on the X-axis pulley – must have fallen out. Going to HD to see if they carry them. They look like M3?

Hmm, well that wasn’t it. I’m having a weird, “pause” or “jitter” when it moves on the X. Back to checking the belt, v-wheels, and voltage. I’m afraid I’m running around in circles making everything worse rather than correcting the issue.

One change at a time Sean is best.

Suggest you disconnect the X stepper wires from the terminal block and then free up the eccentric nuts on the X carriage to the loose position. You can then push the carriage side to side to confirm the belt is tight enough/not too tight.

Then reconnect the stepper wires, retest to see if it moves freely and double check all X axis wiring throughout.

At this point consider running a few “air” jobs that just draw lines in the X direction at different feed speeds but with the spindle switched off.

If all OK there then tighten the eccentrics back up just to the point that they hold firm and no more. Run the air jobs again, again with the spindle switched off.

Then look at the current being sent to the X stepper. Mine is just past halfway on the gsheild. If you are careful you can adjust as the air jobs are running.

Then do a real job with the spindle switched in MDF doing wide rectangles but not tall, lots of X movement, little Y using recommended feed rates.

Again if careful, you can adjust the current slightly.

If that’s no good I’d be looking carefully at the gap between the two makers slides the gantry runs on. It could be that they are slightly too far apart and the carriage is binding slightly.

@IanWatkins, thanks for the recommendations. I did find that one of my set screws had fallen into the track. I think that was part of what was causing the X-axis to bind. I completely cleaned the machine and re-adjusted the V-wheels and tightened all bolts. Things are looking a bit better but it seems that it will get most of the way through a cut and then go off on the X about 1/4".

Again thanks for all the help!

Removing the wires from the X-axis stepper motor and loosening the V-wheels made it easy to check belt tension. The carriage moved without any mechanical binding and I went ahead and re-attached everything. I did the same test on the Y-axis to ensure that everything felt right there. One thing I notice though is that with everything hooked up and V-wheels in position, the Y-axis seems to “stutter” when I move it manually. Is that normal because the motors are working against each other?

Nevertheless, below is a picture of my test cuts. Test #3 was after adjusting the X-axis and Y-axis belts and wheels and looks excellent.

Test #4, no adjustments were made and the X-axis cut was off by 1/8" or so. What could have caused that? Is that a power issue? How could it look great on test #3 and be off on test #4 with no setting changes in between? (btw: The #4 cut was a vertical test.) 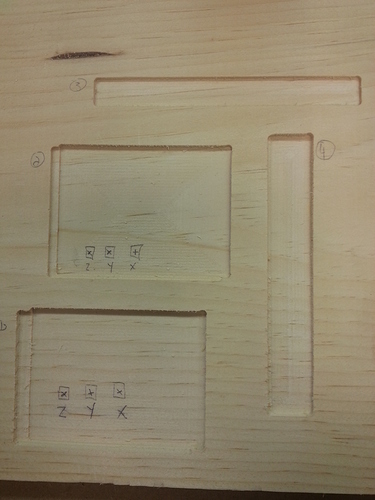 So I tried another test tonight and I think I’m narrowing down where the issue occurs, but I’m stumped as to how to fix it. In the picture below, cut #1 - #5 are all set to a cut depth of 0.028 at 30 in/min. The cut is 0.080 deep so it takes three passes to complete. The first two passes are good, the third is where the problem starts – it offsets for some reason.

SO…what the heck is going on here? What would cause the X-axis cut to be off after a third Z-axis move? 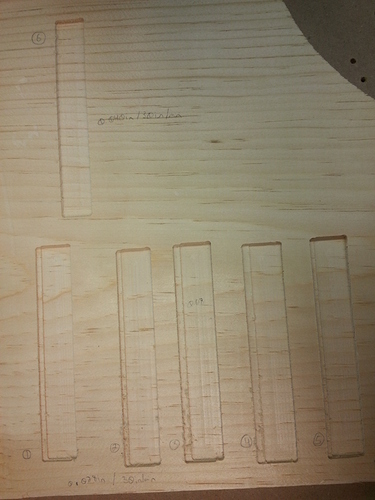 Sean - before you start one of these test cuts, make a mark on the pulleys and belts as a zero reference then make the cuts. See if the marks are still aligned when it is done. If they are, you know the belts are not slipping.

Other things to try would be videoing the cut to see if you can find the issue. You could also hook up your meter to the motors to see voltage throughout the operation.

Does the issue only happen when the spindle is on?

I’ll try marking the pulleys, though it doesn’t appear to be a belt slip because it’s consistent. In the first five cuts, it always messes up when it starts the third level.

I think this would be hard to troubleshoot with the spindle off as it only appears to be the Z that causes the X to become offset. Everything moves great and as you can see with cut #6, it was near perfect at the same depth as the other 5. It just did it in two Z moves instead of three.

Do you have some scrap MDF you can run the problem job in Sean? That will discount the bit being kicked out cutting across the grain that can happen.

But that aside if you’ve done all the mechanicals and you are sure the X pulley isn’t slipping, it could potentially by electrical noise from the spindle as others have reported it but never seen it myself.

Just try running the job but get the spindle power wires as far from the X stepper motor and wires as you can.

I know this is frustrating, but keep at it.

Thanks Ian, I have plenty of MDF, however it doesn’t appear to be a cross-grain issue as the first two passes are fine.

I’ll check for electrical noise from the spindle, it seems that I’m running out of options. I’ve considered replacing the spindle with a Dewalt 660.

Completely re-squared the machine and adjusted tension on belts and v-wheels. Still having issues.

One thing I noticed today is that the X-axis stepper motor is hot to the touch. Like super hot. Turned down the voltage and it still runs hot. Could it be a bad motor causing my headaches? That would explain things running OK and suddenly getting worse. (As the motor heats up.)

My X stepper runs hotter than the Y motors, but you’d expect that, one motor doing the same (ish) work as the two Y motors.

Doing a big, long job with lots of movements, my Y motors run at around 23C and the X is up around 40C. Feels hotter than it is. If you have one, measure the temp with an IR thermometer but on the black sections.

Not a quick test, but maybe swap the X stepper with the Z stepper and rerun a problem job. That might confirm a bad stepper if that is your suspicion.

I could try swapping motors, though that would require me to mostly disassemble the machine. Kind frustrated as it doesn’t seem to be getting better. Everything appears to be normal. Could the problem be with the controller board? Or g-code being sent to the machine?

You may want to switch the Red and Blue wires like you did for Y stepper. Then go to Machine setup, it’ll ask you if motors turning correct way, will change direction if not anyway. This way you’re changing step count around. Steppers doesn’t get hot by working, they’re getting hot while not working because of locking feature. Just try. Doesn’t hurt.