So I do not have a specific project I’m using for this machine. I am just trying other projects and such to try and get any half way decent result. Thus far, $11,000 wasted. Come to find out Easel is severely limiting in its own right, and then there is the machine that cannot cut ANY of the recommended settings. Then you turn to YouTube for how to videos and see everyone else using the same material, same type bits, at astronomical speeds (140, I know thats not a lot compared to some machines, but faster than I can!) while I can’t barely go faster than 30-40 feed rate at 0.01 depth on any bit or else one it’ll break the 1/16 bits, or any other bit just absolutely demolishes the attempted project. Terrible cut lines, heck I have to sand inside every cut line because it’s so trash even with the fancy vbits. Does anyone actually have ANY settings that are helpful or do I just have to continue wasting hundreds of additional dollars on broken bits and ruined wood? I’ve used every imaginable type of plywood, and just today got some oak, premium pine and poplar planks to see if it was just plywood can’t be used. Same result, downcuts gouge and splinter UPwards, vbits with terrible resulting cut lines. Then I see on YouTube everyone using any form of plywood with great success and beautiful lines. What gives? Junk machine?

In regards to the 1/16" bits. They are easy to break, yes. I dont use endmills smaller than 2mm diameter on my cncs and even those 2mm i have a variety of lengths and only use the shortest cut lengrh for the job, too long of a cut length causes excessive deflection and bits will snap.
Something else to note, when your feed rate is too slow and your cnc is not generating chips, then the bit will heat up and that will shorten the life and can also cause bit breakage, so the slow feed could actually be part of the issue with the broken bits.

Regarding wood selection, most of those videos you’re watching with plywood are using Baltic Birch plywood, this is a higher grade, with solid wood plys (no voids or knots) and uses more plys, thinner plys, and a thicker veneer on the outsides… this is not the same as “Birch” plywood from the big box stores…

I suggest MDF as the best material to learn to your cnc. It is very soft and more forgiving to using wrong settings.

As a matter of my opinion, i wouldnt have suggested a XCP as a first machine for anybody.
You’ve made a large financial investment into the cnc world where about 5-8% of first time buyers (of cncs in general) give up and sell it off before ever making a single successful carve.

My first cnc was a 3018 from aliexpress, a $100 investment, that ni used for over a year until i fully understood the ins and outs of cncs before upgrading and increasing my investment. Because i was ready to throw away $100 into what could have been a total waste of time had i not had the mental fortitude to understand the workings of the machine. I most definitely wasnt willing to risk $5k on it.

If you’d like specific help on specific issues I’m offering to help if you like. I suggest sharing the easel project (one at a time) that you need help with.

Another thing to check is that all 4 belts are properly temsioned or the assembly guide, and that the wasteboard is surfaced, these are imperative to have a smooth running machine.

Side note: Have you contacted inventables support about these issues/concerns?

Thank you Seth for the comment. I have reached out to inventables, supposed to be having some replacement bits arrive tomorrow but not much else in the way of diagnosing problems, other than being told to keep slowing down the feed….at some point 20 feed rate isn’t worth the price of the product as it would take a day to complete even the simplest of designs! I’ll message you directly with all the responses to your sections. Also, I apologize for any lack of decorum in my original message, super frustrated at the learning curve here! Lol

possibly you’re just using the wrong cutter, one thing that ■■■■ me off is breaking an End mill and/or cutter.

Then i started using tapered end mills(at 5 dollars a piece and haven’t broke one yet) which are much stronger than straight end mills. 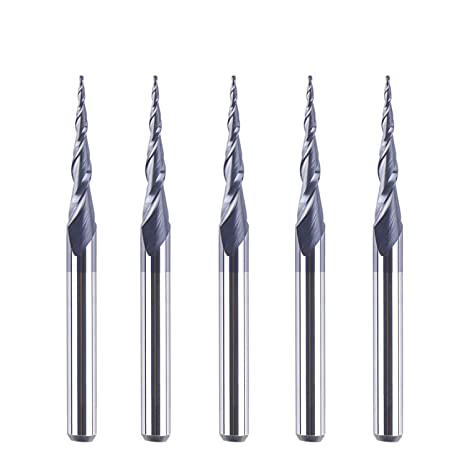 Got some of them on the way! Bout about $400 worth of Amana bits last night to see if that’s part of the problem I’m facing. Also found a program that’s supposed to help calculate feed rates and spindle speeds. Still trying to figure it out but at least gives me some numerical values to try out.

I agree, start with cheep Chinese cutters until you get a feel for cutting and the process. It hurts a lot less when you break them. Also use the largest cutter you can. Bit flex and chip removal are your enemies. The bigger the bit the lower the flex. Shallow flutes can quickly clog up and cause cause more tool pressure making the situation worse.

I mostly cut plastic and AL so I never use anything less than 1/8", and prefer to use 3/16" or 1/4" - especially with AL. Actually I’ve switched to using cheep 6mm single flute HQMaster cutters from Amazon for all my AL and Plastic cutting if I can: Amazon.com
I don’t cut much wood, but never had any issues cutting birch plywood or MDF that I can remember, and I always went much more aggressive than what Easel suggested and that was on a standard (but upgraded) 1000mm x-carve. If you have the Pro version you should be much more capable, but you are only as capable as the weakest link, and if you are using small bits, it will be the bit.

it’s actually spetools.com (with the S at the end of their name for some reason…) and use code “SALE” for 16% off

Update with Zak’s issue though, apparently the VFD in the XCP controller was setup wrong and the spindle was spinning in reverse…

To give everyone a heads up. Talked with the tech team, my controller is bad. My spindle spins counter clockwise which has been my problem the whole time. Waiting to hear if they have one that they can get to me, then I can start the learning process all over again haha.