X-Carve work table - is this the best idea, or the worst idea?

I just ordered my 1000mm X-Carve, so I figure I’ve got about 3-4 weeks now to figure out where to put the darn thing in my shop (garage, but packed with lathe, table saw, band saw, sander, dust collector, grinder, scroll saw, drill press, etc). I thought about building a fold-up table like Steve Charmichael did (he has a YouTube video about this), but then I saw this online:

4’x4’ platform, I would top it with 3/4” ply and secure the X-Carve so it never slides around. Also, engineer some removable legs so when the rack is lowered down, I can attach legs so it is solid and stable, not just hanging on the support cables when actually in use. Platform lowers down using a power drill, I attach legs, use the machine, lift it back up a few inches to be able to remove the legs, and then zip it right up to the ceiling with the drill again.

I would be well within the stated 250# capacity. With this thing, my machine will live happily way above my table saw when not in use, and I just move the saw (everything in my shop is on wheels except the lathe) when I want to bring down the X-Carve.

That is actually a pretty cool idea. You would have to make sure the table doesn’t flex so I would put a frame under the table which would give you something to attach the legs to. You could also make the legs fold up and save finding a place to store them. Or just build some brackets into the bottom of the table.
The only draw back I see is cranking this thing up and down ( I have something like this for my canoe and it can be a job getting it up and down ).

So weird that you posted this a few hours ago. Seriously, it is like you described my situation exactly. Large x-carve, full shop, etc. I have kept around a Harbor Freight hoist that I picked up for $50 bucks a few years ago knowing at some point I would need it for hoisting something up for space. I just installed the hoist last weekend. Today, I actually built Charmichael’s table. I decided to go that route because I was able to move some things around and found wall space I can put it up against. Not ideal, but it is an older detached garage we fixed up a couple of years ago, so the ceilings are a little low. If the x-carve weren’t so large, I’d probably do it. But, I figured that I could use Charmichael’s table with a small mod such that I could fold both sets of legs, put in a stopper so they don’t unfold, and then hoist it to the ceiling. If I do this, I would have to modify the joists that run the length of the garage so that I had a 48"x48" opening (like a big attic access framing). If I ever get that done, then I’d much prefer going up and out of the way. Even with the folding table folded, it still takes up some space. And, if I go up, I think I could also mount a monitor to the table since it won’t be folded and pushed up against a wall.

As a last option, I consided just building Charmichael’s table without the base legs and just having the legs that fold in. When it is lowered, it would lower down near my work bench where I could just clamp the edges of the x-carve table to that and unfold the legs for the other side. Would be plenty of support.

Anyway, that is my ultimate goal, but with a baby due in a couple of days, I took the quicker route for now with a hope to upgrade to ceiling … in 18 or so years.

Great idea! My only question is why you wouldn’t just lower the platform to the top of your tablesaw? That would be a stable base and not require any other support. And, you wouldn’t have any need to move your tablesaw.

This is a good point. Two questions, though - Will I ever need my table saw while I have my X-Carve running, and second, Could the top of my table saw ever be completely cleared off of stuff (tools, wood scraps, other projects being worked on) to make it possible to use for this?

This is a good point. Two questions, though - Will I ever need my table saw while I have my X-Carve running, and second, Could the top of my table saw ever be completely cleared off of stuff (tools, wood scraps, other projects being worked on) to make it possible to use for this?

Yep, you make two good points, Steven! As long as some CNC jobs take, I often cut down material on my tablesaw during a CNC cut. Oh, well… was a thought, anyway.

I have two of them(the lifts) and love them. Right now I actually have an old tread mill on one so it can hold 250 pounds easy. You will need to replace the shelf(cheap wire grid material). Ive been thinking about doing this once I upgrade to 1000^2 xcarve. I set up secondary retention on them just for peace of mind. The hoist does have a safety break. If you have any questions on them let me know.

@EdShouse Can you attach some pics of your setup when you get a chance?

I have a two car garage I have to share with my wife’s car so I am limited on space. The lift has about 18" of clearance on a 9’6" garage with a 7’ garage door for storage which is more then enough for your xcarve. 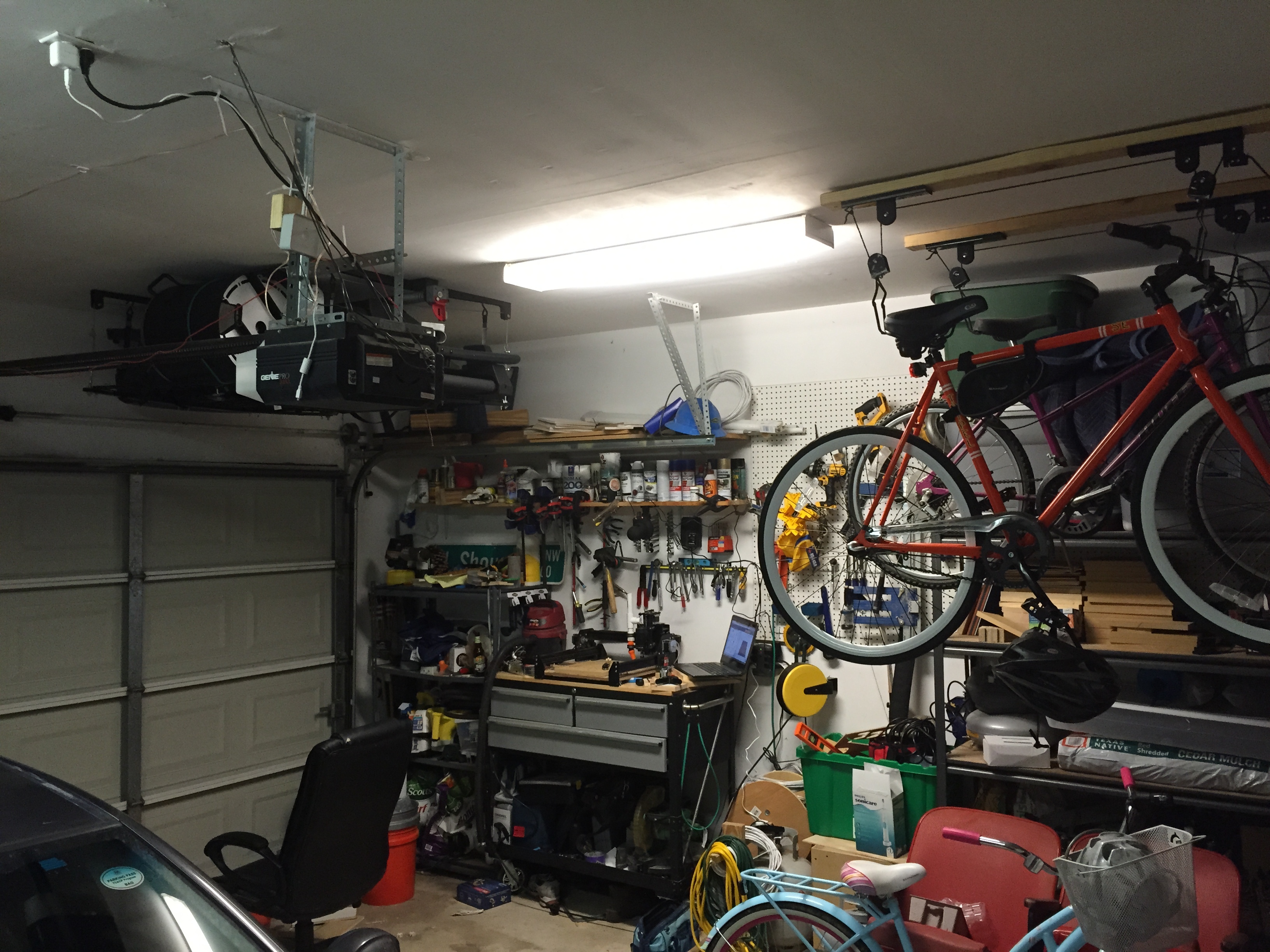 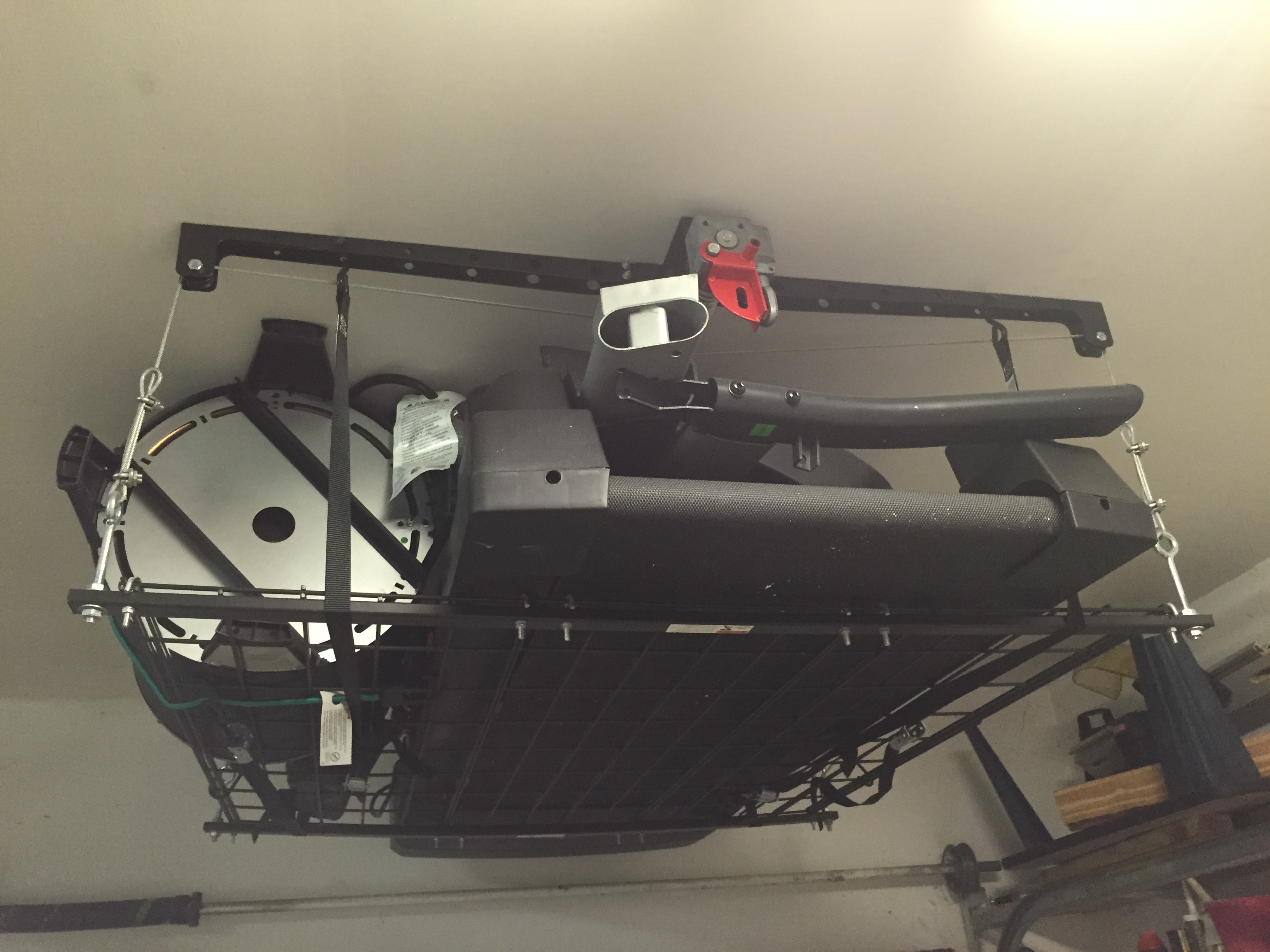 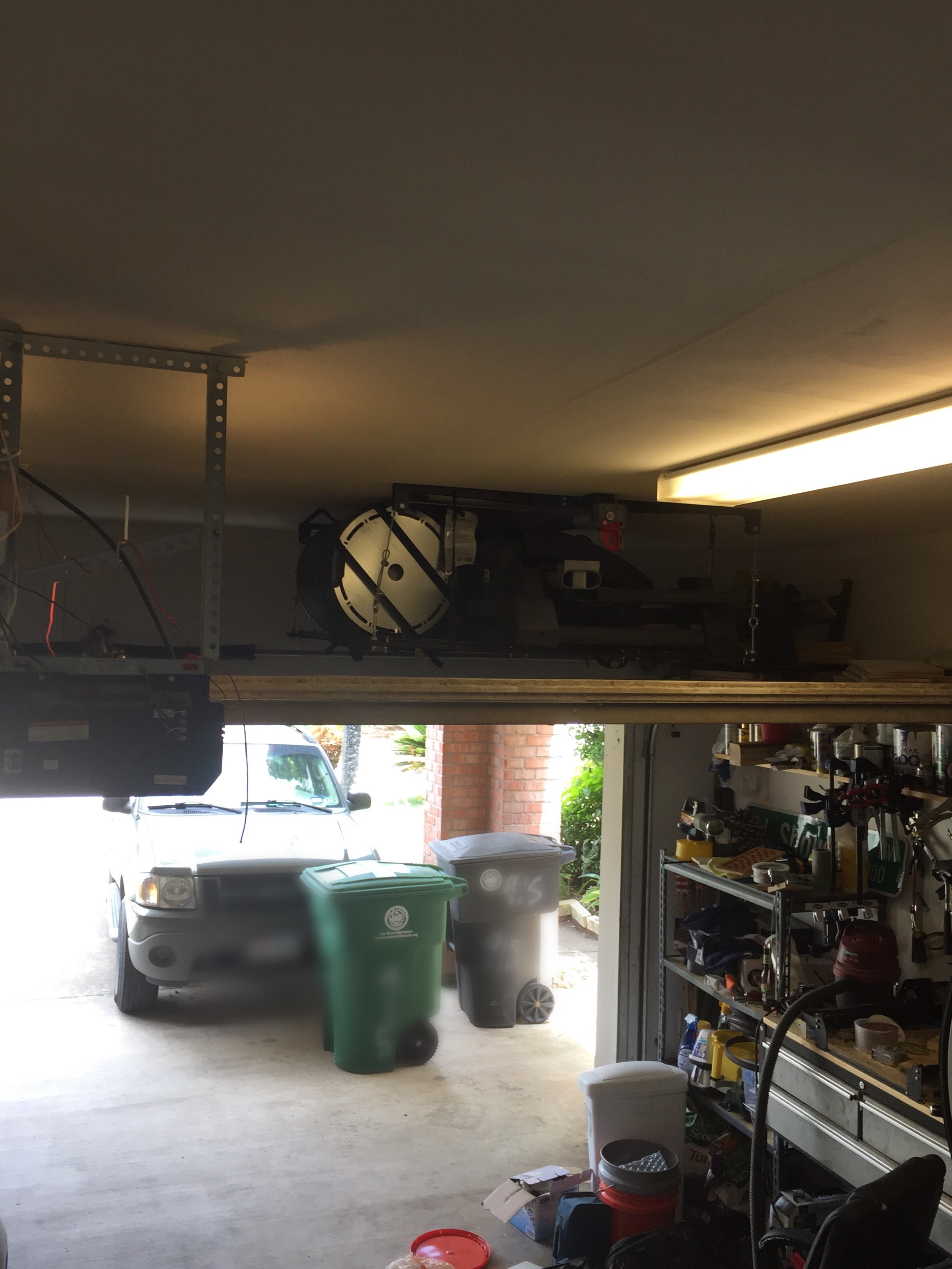 Very cool!! Thanks for the photos!

I faced the same problem. My garage walls are lined with storage or workbenches but have less than 3 feet depth. But I do have ceiling space 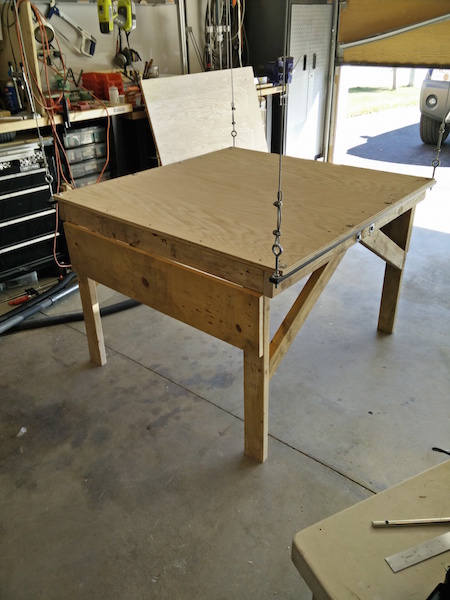 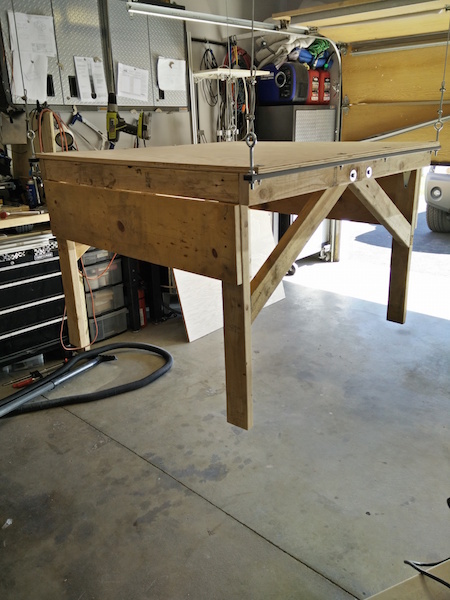 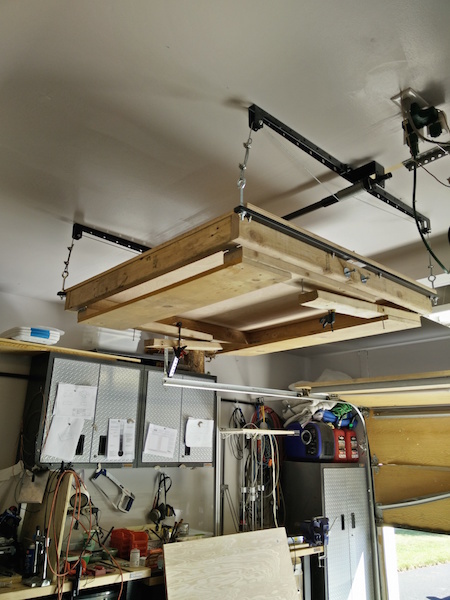 Still working on the bracing to make it easier to handle. Right now I use long screws on the diagonals. That will eventually wear out. I’ve added structure to the underside of the table since these pics were taken and it it quite solid. So far it is working well.

This is freaking awesome

steve carmichael told me hes never folded his xcarve away because hes to busy using it!