For those of us who already have the original grbl board and power supply, will the power board and control board be sold individually so we can tinker and create our own cases ?

I see one of the first upgrades for this upgrade, is swapping out the fan for a better unit, I have my PSU and control board mounted upside down under the work table so the emergency stop doesn’t mean much to me, and I’d rather design and print out a box for it that uses a larger fan and has better ventilation.

Will this be possible in the near future ?

For those of us who already have the original grbl board and power supply, will the power board and control board be sold individually so we can tinker and create our own cases ?

I was wondering this same thing.

The one reason why I haven’t bought the X-Controller is because I already have the power supply.

I’m going to assume this is not part of the sales strategy for this board considering the 10 day ( so far ) response gap from the powers that be.

Inventables is the hardware store for makers. I would like to think that sooner or later they would give us that option.

When (and if) they do, that’s when they’ll get my money

Hard to justify making the purchase when you’re forced to buy the same power that you already own.

For those who haven’t purchased the X-Carve yet, don’t buy the power supply, and instead get the X-Controller. It’s a great option.

Don’t by the Motion Controller Kit or Power Supply. The XController takes care of both.

I’m on the same boat. Definitely if I was buying a new system I would simply spring for the whole controller, but I’m already invested in a unit with compatible parts and have functions or mounting requirements that don’t jive with the box’s configuration…so… I’ll wait. May even be willing to buy the case and mod it for what I need…but not the fan or the power supply.

@ErickAguirre sorry for the slow response, I didn’t see this thread on the forum until @PhilJohnson added my name and it popped up on my alerts.

My lack of response had nothing to do with our sales strategy. As you might imagine I get about 100 emails a day plus there are probably another 100 or so threads on the forum. Some days I’m not able to keep up as I have other work and meetings I’m required to do.

With the X-Controller we are working on having them come assembled from the factory so you can have more of a “plug and play” out of the box experience. This is proving to take much longer than we were quoted because it is a more complex project than just shipping the boards and we don’t want to cut any corners.

I’ll take up the conversation internally about what we can do with people in your situation.

While you are discussing that issue can you also address the lack of information about the controller board? Are you going to release schematics, photos, technical details? I can’t find any information on the web site other than a mechanical drawing and the sales info.

Some days I’m not able to keep up as I have other work and meetings I’m required to do.

@LarryM
I am pretty sure that information has been available since day one of the product:

Are you looking for more information? 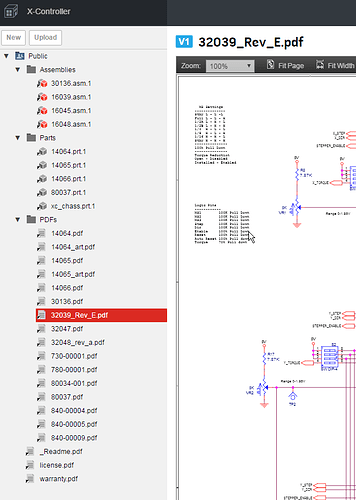 Thanks. That’s what I wanted, just couldn’t find it.

@Zach_Kaplan apologies if I sounded prickish in my original response, just got used to other forums that move a bit quicker. Definitely understand the lag time. Didn’t think to tag you honestly.

I think there’s a lot of “makers” out there that could be interested in tackling their own box setup, most are manic about how they organize their workspace as most of you know. If it becomes available is definitely be ordering. Between this, my ultimaker 2, and the Glowforge that’s on the way eventually, I kind of have to start getting finicky about where I spend my $

One major obstacle to over come with just a raw board option is the cooling and electrical connections.
Users would have to supply their own proper fan and heat sinks.
The connections to the steppers are on the X-Controller’s main board, however all the additional IO is broken out to several jumper headers, which then require additional headers / connectors to connections too.
Having just the raw board is NOT a plug and play solution.
In the end, one would truly need several boards to be practical.
Once one starts too add up all these additional parts and fabrication challenges, it makes it starts to make less sense.
But nothing is impossible! Plenty of things can be fabricated at home given enough time and expertise.

The community should take a look at the schematics and assembly diagrams to see what can be reused / remade / recycled.
https://workbench.grabcad.com/workbench/projects/gccWWqg7Xn5zxu1LdZaSw47oqtgERENMYrENtBVFZdqoJn#/space/gcJwpBtm1Xi6fwAxHTFBIGDQRc1Os0WlcxNAT9gWpzWs8w/link/219570

@Zach_Kaplan (just in case you are considering selling the controller board)

I would envision two scenarios here.

One. ----- Someone has a problem with their controller board (16039) and they need to buy a replacement (a driver chip goes bad or some such thing). This would just be a bare controller board that they could swap out with the defective board in the X-controller.

Two ---- An electronics upgrade kit. It would consist of the controller board (16039) with the heat sink mounted, the plug in connector modules (4) for the stepper motor connections, a 3-pin pigtail for the power connector, and two IDC pigtails for the logic wires. Such a kit would slide right in to replace the Arduino/gShield electronics (you would need to supply your own case).

At a minimum an option without the power supply should be made to those who already have an operational system. I really wouldn’t mind buying the case, which would definitely get cut up to fit a larger quieter fan, don’t mind the e-stop button which I could make a bracket for and remount.

But buying a whole new kit with power supply to just have it kicking around seems wasteful.

Having just the raw board is NOT a plug and play solution.

Either is buying the X-Controller, as it is currently a kit.

Users would have to supply their own proper fan and heat sinks.

The heat sink is pre-installed (according to the instructions).

At a minimum, as Erick mentioned, selling everything without the power supply would still be a big leap forward. For others it would be an early Christmas if just the board/heatsink would be made available.

Not anymore. It is now fully assembled.

I thought they were having some issues with this. Did they sort all of that out?

If so, then the next step would be to offer it without the power supply, and as just the board/heatsink.

That’s a great point! Don’t by the Motion Controller Kit or Power Supply. The XController takes care of both.