Anyone here know if the X-Controller will work on an old Shark CNC, specifically the white 13” x 24” model. I know, I know, I should have bought an X-Carve (the community is second to none), but with the Canadian exchange rate, shipping, duties, and taxes, it was just out of reach right now. Got a deal locally on this Shark unit I couldn’t refuse. Had my heart set on the X-Carve 750mm model, even started creating models in Easel. I figure I can put it together one piece at a time. Anyways, any info will be very much appreciated.

Thanks for your time,
John

it should work as long you know how to wire the step motor. 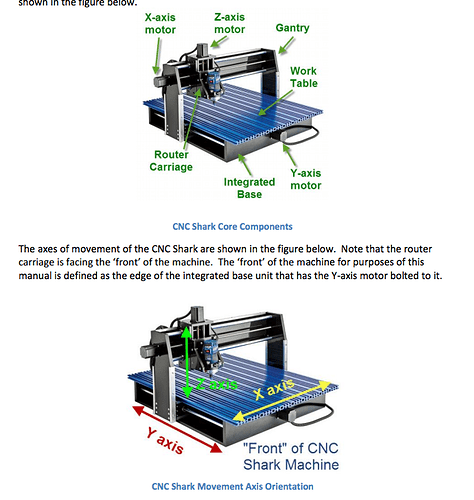 Should work, the X controller does not know where the wires go. Easel will send a command to the X-controller about how much the axis need to move, Grbl inside the X-Controller will translate that to a number of steps to be moved and send the steps to the motors.

The stepper motors will have 200 steps per revolution (or 400 but less likely), inside the X-Controller there are jumpers that define microsteps (std is 2 for Z axis and 8 for X and Y) I suggest you change that to 2 for each axis. See instructions here

You can use machine setup for the initial setup and configure it like an X-Carve with ACME rod, that will configure the direction of your axis but the number of steps per mm will be wrong. The Z may match or be off a little when the pitch of your ACME rod is not the same as on the X-Carve and the X and Y will move less.

Thanks for all your help. It looks like using the X-Controller on the Shark will work after all (with a little tweaking of course). The replies are very much appreciated.

I am very interested to see how this turns out. I have an old CNC shark with parallel port interface. I’ve considered ditching the old controller for the X-Controller. Any success to report or setup tips?

Hi Bill, sorry for the delay in responding, a workshop mishap has kept me out of commision for a awhile. I have not yet purchased the controller as I am patiently waiting for either a sale or a more palatable exchange rate. My plans are to eventually move towards an x-carve, but i do not have a time frame right now.

So in the mean time I just grabbed an X-Controller, recovered my CNC shark from a dark corner of the workshop and went to work. We had literally not touched this unit in close to a decade. Last time I visited it we had it running on Bob CAD and Mach… it either had a serial interface or a parallel interface… I can’t recall. I picked it up when the business had some spare cash to burn but our shop quickly went all Macintosh and we brought on a few laser cutters which were better suited to our processes. While I understand that NWA offers an upgrade for our tired controller (upgrade to USB) my opinion of the unit in it’s original form was that it wasn’t intuitive to use. So there it sat until I loaned it’s use out to a local club, it was later returned to me without the controller or power supply - as they had tried hacking something more modern together scavenging parts from the working controller. Enter the X-Controller.

When I saw what Inventables had done with packaging on the X-Controller and the simplicity of Easel I thought I might just put it back into service. I have some summer work coming up that is going to require cutting thicker / harder stock then my lasers can do (cleanly).

Long story short as I’ll probably start a more in-depth thread on the conversion… I couldn’t be happier with the X-Controller driving the NWA CNC Shark. The most time consuming (and fruitless) part of this process was scouring the internet for the specs on the shark NWA does not provide the motor / lead screw info… Not to mention the specs have changed over the years… and for some reason it appears that NWA holds these specs as a closely guarded “secret”. Ok… enough of that… it occurred to me… I should just measure it - duh! Here’s a shot of the Shark and X-Controller after proper Grbl setup and knocking out a test draw using Easel.

I’ll get into the specifics later as I’m pressed for time today! Bottom line - the crew here at Inventables is to be commended on a fine product! 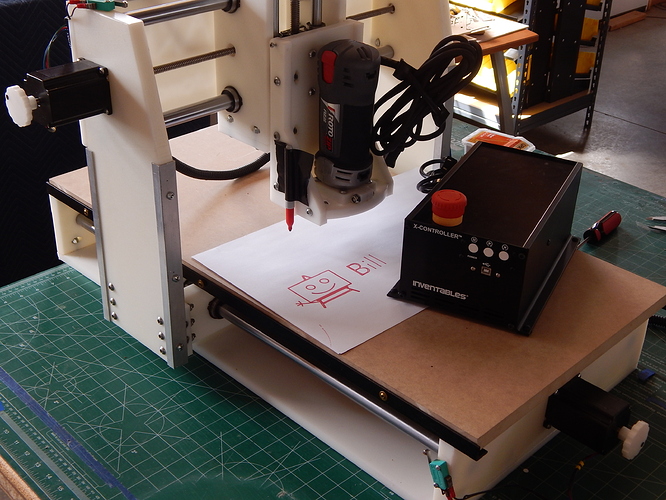 I tried that at first after I confirmed that the motors were NEMA 23 - then I just fired up Easel and went for it but it was moving crazy fast and in the wrong way. Went for the big red kill button before I crashed the gantry… then grabbed the caliper, ruler, and dial indicator.

As I needed a new waste board I pulled that up and proceeded to measure the ACME leadscrews. Diameter / pitch / and #starts. I used a formula from the Grbl wiki to come up with the steps per revolution… attached is the output from a spreadsheet I made - this has the specs of the leadscrews for my vintage “White” CNC Shark. 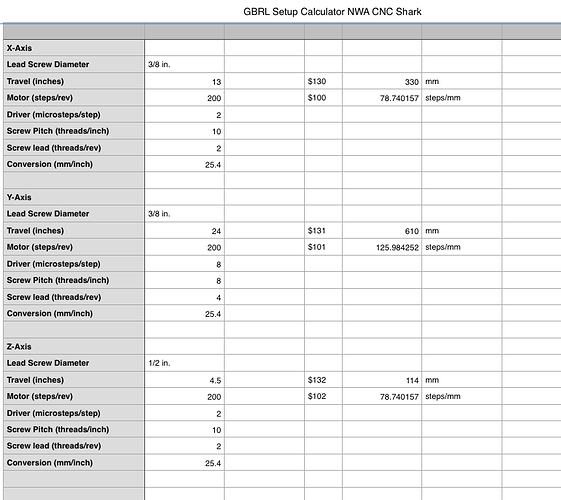 I was still having some issues with accuracy but after reducing the micro stepping values in the hardware (x-controller) and dropping the acceleration and feed rates a bit everything was spot on… I then used your help document on placing a long metric ruler along the travel axis to double check that everything was moving the proper distance over longer distances… it is dead nuts on. I need to go back and monkey/fine tune a few of these things… I’m not certain I need such high micro stepping on the Y axis either.

Here’s a shot of the X-Controller hardware switches as I left them. 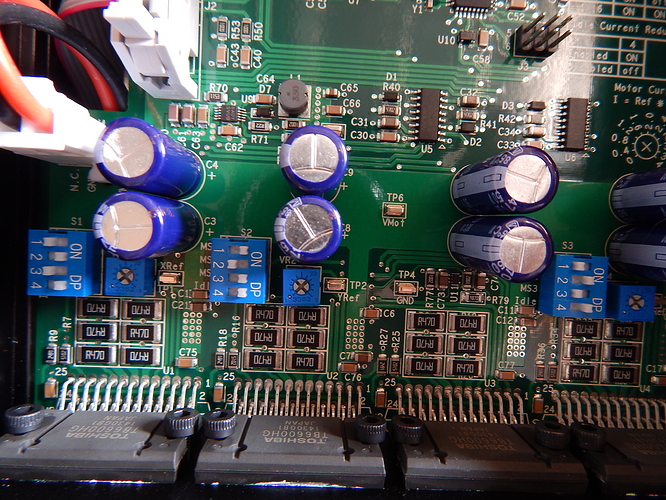 BTW Phil, thanks for all the help docs you’ve posted out here they came in handy when dialing this in.

Folks, I sold my X-Controller powered CNC Shark and moved on to a larger more industrial machine. The X-Controller ran that Shark far better than the old parallel port driven clunker that NWA supplied. Anyways… I figured I’d leave the basic details and settings here just in case someone else comes along with the same machine and controller application.

Note with the initial default settings - I had some missed steps and dropped the max rate and acceleration (see settings below) to more conservative numbers. I had begun working these back up but forgot where I ended up before I got pre-occupied with my new larger machine. I don’t think you can go wrong starting out with what I’ve posted below:

I want to thank all who posted such useful information about this. I am a newbee to cnc carving but just got a shark pro with a bunch of woodworking equipment. It worked for a short time and now it will not move any axis. I think I have it narrowed to a board in the black controller box. it has NcPod w/usb and sdcard and a xylotex board feeding out to the steppers. I am open to upgrading somewhat but I would sure like a reasonable answer so I have a chance to become addicted to this sport. I am finding references to Gecko 540, speedstep, mach3 as well as this x-controller. But I’m not clear on whether one item will do it. It seems like the control software I have is really primitive too. Will this x-controller install in place my box with the two boards? IE: power supply (24v) >> x-controller >> steppers? or is something else needed in between. I found a spec sheet that says no controller like mach3/4 is required but I had the impression mach3/4 is software? Note that I have spent hours getting a grasp on fusion 360 thinking that would be a good choice for design, not only for the cnc router but also for 3d printing (that seems like the next logical toy :))
Please advise me if you can. Any guidance would be greatly appreciated.
Chuck

Mach3 and GRBL are like apples and oranges. Mach3 utilizes a printer port on a computer or you use can buy a USB converter for it. I have mach3 on one of my routers and have used it for years. It was essentially the industry standard for hobbiests until GRBL came along.

Thank you for that information. Lpt printer ports seem quite antiquated at this point.

That is why one buys the UC 100 to utilize a USB port.

My controller box has two boards in it connected with a ribbon cable. One board has the USB connection and an SD card slot. Is that board what you’re referring to as the uc100? From what I’ve seen the old sharks came with a parallel port interface. Is this newer or has someone converted it? Am I correct in assuming did if I bought the inventables x controller that would replace my power supply as well as my controller box with the two boards? Then I was used the universal gcode sender to send my gcode file to the CNC? If that’s right then if I bought the x controller it would be a good upgrade for me all the way around and it would be the only thing I have to purchase? I apologize if I’m posting this in the wrong spot. Maybe I should have started a new post rather than reply to one several years old.

I can’t really answer that. My controller has the old style printer port connection. The UC 100 looks like what is in the picture I linked. That connects up to a usb cable comes out of it. That USB cable has to be connected to the PC. You may have something quite different. You may want to post a picture. 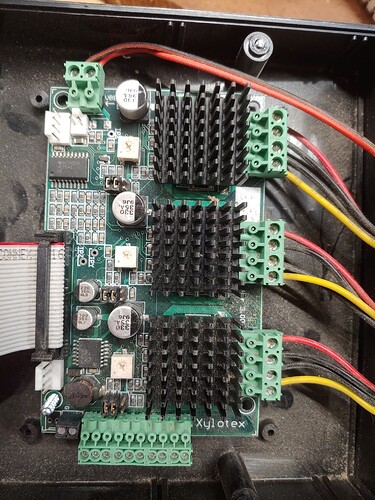 It looks like you have the old style DB 25 printer connection there. That’s what the UC100 connects up to…the end not in the picture I’d assume. This is a picture of how things go minus the uc100 which would be in between the board and the pc. It is also 4axis, not 3. 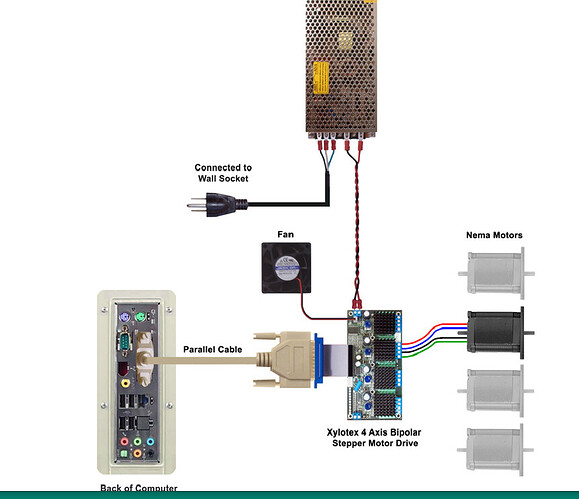 It’s starting to make sense to me. I don’t have the db25 cable going to a parallel port though. It goes to another connector and then separate wires go to the small board with a USB and SD card. It looks kind of jury-rigged so I bet that USB adapter was added somewhere along the line. It makes me think that the x controller might be all I need to buy to get myself going.

Well the Xcontroller would replace all of that except the computer and the motors. You might want to check what size your motors are in terms of force.