The Z-axis will, when testing the wiring and using the arrow buttons to move it step-by-step, it’ll do maybe like a 1/16th turn either direction.

I searched this forum and found someone had a similar but not the same problem, and I switched the Y2 and Z wires on the controller. When I tested the Y, the Y2 side did the same thing. Motor did about a 1/16th turn on the Y2.

So I conclude that the Z axis socket in the controller is messed up somehow, but since I’m not experienced I’m not sure how to fix this.

since I’m not experienced I’m not sure how to fix this.

Call Inventables. It may be a failing stepper driver chip.

Did you check the jumper (steps) for you Z.

Take a picture of the jumpers and post it here so we can see if they are in the wrong positions.

I think these are the wires you guys are talking about?

I’m working on this with my dad, who did most of the building and I stood next to him haha, so I’m not entirely sure if this is it.

The picture we are asking is the switchsame inside. Like these ones 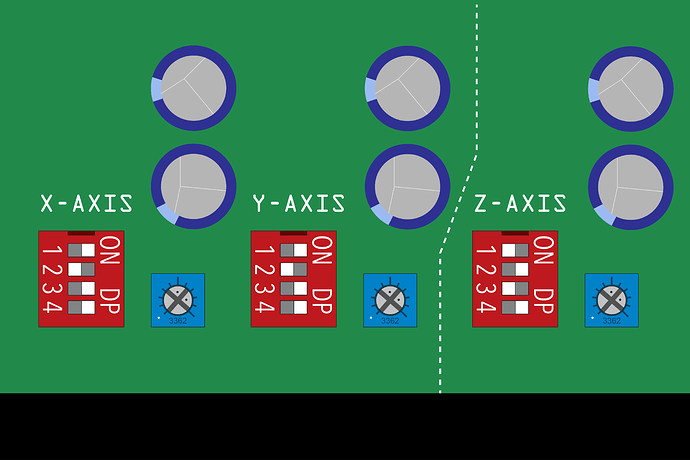 I just realized the dials aren’t set to the same as the diagram, should I do that?

Don’t worry about the dials yet, we need the steps first. The dials are motor current.try moving switchs then move them back. Un plugged of course. Try that.

Have you set up in easel yet? Post “$$” settings

And no, I haven’t gotten past much in the setup yet for Easel, only the machine details. I’m still stuck on the wiring test for each axis since the Z doesn’t move, and the limit won’t work with it either.

Does z move at all, if so try easel set up.

Z doesn’t move at all, the motor doesn’t even do a full turn. If I change the Z and Y2 wires, the Y2 will do the same. I assume the same for the others if plugged into the Z socket.

Try to setup in easel. Z moves, but just a partial turn?

Can you, with power off, manually turn the Z axis with the nut on the top of the lead screw and make the router raise and lower (and the pulley on the motor turn)? If not, you may be binding between the delrin block and the Z axis screw. If you can turn it manually without too much effort but the motor pulley doesn’t turn, maybe check the belt tension, there was a step where you had to ‘tighten’ that belt by loosening the motor mount screws, pulling it away from the Z axis leadscrew, and then retightening. If the Z axis moves but the motor shaft doesn’t, maybe it’s the setscrew on the pulley at the motor shaft that’s slipping.

If none of these mechanical issues are a problem and you still think it’s control electronics, try wiring the Z axis to say the X axis (all 4 wires) and see if the nudge commands in X move the Z. You might have a bad g-shield or arduino. This happened to me early on - my g-shield died and Z would only actuate in one direction (down of course). Got it replaced and I’ve been fine since, but still want to upgrade to the X controller one of these days.

Your original post indicated that swapping Z for Y2 made Y2 do the same thing Z had done, which leads me to believe you’ve got an issue with the Z axis on the g-shield, since that particular stepper driver chip is acting consistently bad no matter where it’s connected. You just need to confirm the other way around by hooking the Z to one of the other axes and make sure Z actually does what you want when controlled by one of the other chips.

I suppose your current dial could be turned way down on the one stepper chip that’s not behaving. but I doubt it. You’d miss some steps under much more load (all 3 moving around) but I doubt with just a jog test it would fail that badly.

These folks are dealing with an x controller not an arduino/gshield set up.
Dont feel bad, I made the same mistake not too long ago as well…

Yeah I’m working with the X-Controller right now, I dont’ have a gshield/arduino.

The lead screw will turn manually, so nothing is wrong mechanically. When I plugged the Z-axis wires into the X, the Z will move when tested.
In the same situation, when I test the X wires plugged into the Z controller socket, the X does not work. It does the same thing as the Z. It actually provides a clearer view of the situation because, when plugged into the Z, the X-axis will move but it is extremely sticky and jerky/inconsistent.

It will move normally for one step, but after that, in either direction, the steps will get much smaller and eventually doesn’t move.

So something’s wrong with the X-Controller’s Z-axis, I’m not entirely sure that changing the dials would help either.