I got the 3.8W laser engraving kit from JtechPhotonics but I didn’t had time yet to give it a try. The benefit of the laser engraving / cutting is that it does not make a huge noise compared to the CNC; so I can progress learning CNC without the milling dewalt 611 noise. My plan is to laser engrave some wood or laser cut skateboard grip.

I watched lots of tutorials (includes on JTECH website and youtube) but I may need some help to get started.

The laser is installed, got all the safety gear ready. I’m not going to run it until I’m confident on the engraving/cutting, that can be done in the air (laser off).

I’m using easel and downloaded the trial from VCARVE pro (but I didn’t learnt it yet).

I understood that I need to use GCode Universal to send it to the XCARVE (by getting rid of easel); I managed to get GCode Universal working, I had an Alarm alert but used $H to get the return home. Now I can control the Xcarve and move it around the surface X,Y,Z. That’s a start. 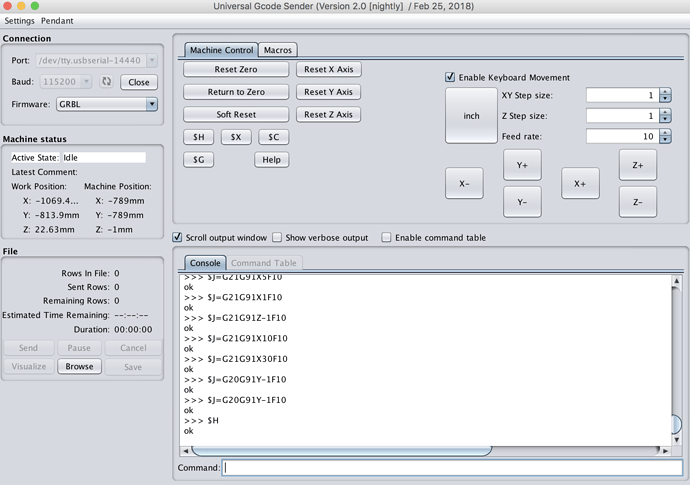 My question is, what is the next step? I would like to draw a shape and send it for laser engraving but I’m stuck. How do I draw the shape? in Easel? I’ve not found a end to end tutorial somewhere and it seems pretty simple but I just don’t get it.

I am in a similar learning curve just a few days ahead of you. Designs made in inkscape, export to MS Paint as .PNG then convert to .BMP, opened in Picengrave Pro to save the gcode, sent to UGCS. OR design in inkscape, export to file, open with GBRL Laser and run it. There are so many threads on here about Jtech its hard to sort through them to find a specific answer. search for Phils laser journey. 500+ replies. Start there.

Good to hear you have all the safety gear installed.

Safety first,
Never think for a second that because it’s quite that the laser is not as dangerous as a router screaming at 20,000 whirling sharp pieces of metal around.
The laser can permanently damage your eye sight in a blink of an eye without making a sound.

A personal note, don’t wear your laser glasses over a pair of reading glasses. Doing this prevents the laser glasses from fitting snuggley to your skin surrounding your eye. I did this and enough secondary diffused laser light was reflecting off my cheeks that it must have made it to my eyes causing a pretty bad headache after watching a job run for 10 min or so.

I would highly recommend building an enclosre for your machine. It’s a great price of mind knowing the laser radiation is safety contained in combination with wearing the safety laser glasses.

I will tell you I think the learning curve may be steeper for the laser than just plain milling with the router. The reason being is there is a lot more information out there for work flow using just the router. Once you have a good work flow established for milling work, figuring out the laser work flow is pretty easy.

All that being said, my work flow is this.

Open Vcarve (I have the desktop version)

Draw or import pictures for what ever shapes I want.

Create toolpaths for those shapes

Open the file you exported from vcarve.

Zero you machine, make sure your laser glasses are on, run the job.
.

thanks ! what if I don’t have VCARVE? I’m stuck as I downloaded the inkscape plugin extension here

followed the tutorial and it fails when I export 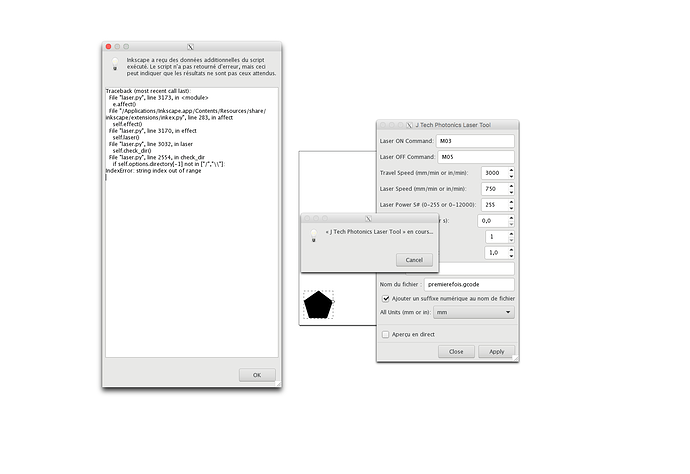 I know it’s more money, but just buy vcarve desktop, you won’t regret it. It’s the single best thing you can buy to make your CNC journey a fun and rewarding one. It’s so easy to use, it makes all the other options look silly.

If you want your laser running right now, you can use LaserWeb 4 (it’s free).I use LW4 whenever I need to do a quick engraving with my X-Carve and JTech. Import your file (SVG, JPG or whatever) then go.

hey ! I have followed your advices and just bought the VCARVE PRO. That’s expensive but well, seem that was the only way to go to learn CNC in a more successful way.

I got the laser running with VCARVE => UGS but nothing gets burn because the focus is not done. The laser area is like 15mm x 10mm so nothing happens in terms of “burning”. 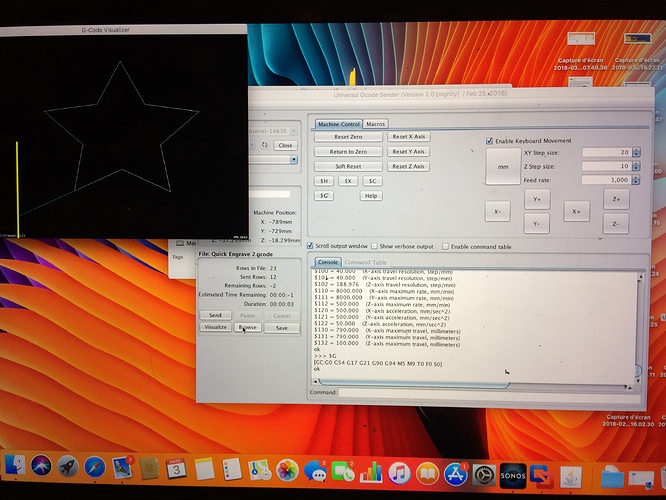 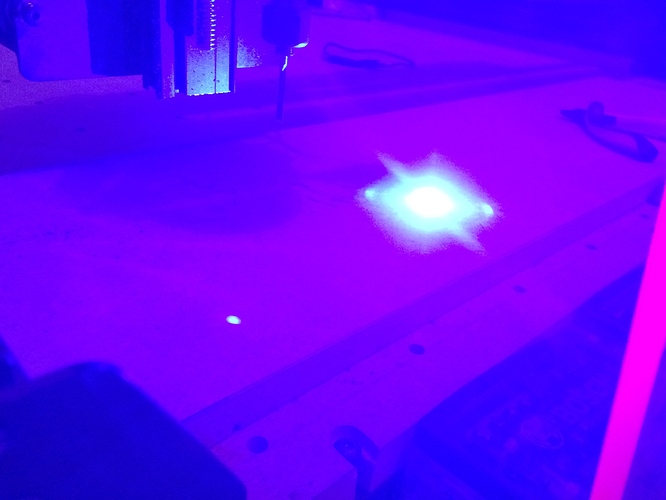 I need to focus it. Will do the following and report back

So you just bought a fancy new laser and now you are wondering how do I get the results that J Tech is getting when I know nothing about lasers?  The answer is that you need to always have the laser be at minimum focus to be able to perform cuts...

Focus set to around 3.5cm from the laser head; It seem that for 3.8W it’s the default focus zone. I didn’t tweak it.

I managed to get this.

For the coarse grip, 7 passes; for the normal grip (brighter), 4 passes.

For the foam, it’s dense and the finish is not as perfect as I wish, dunno what to adjust here; maybe the speed; get it higher and do more passes. 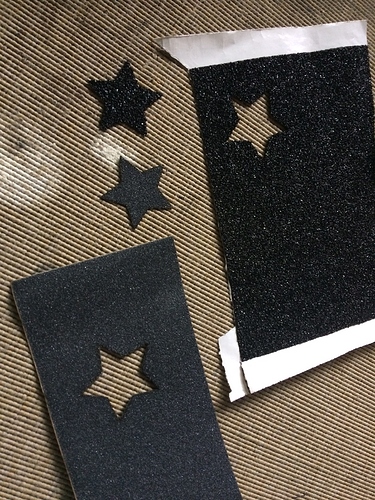 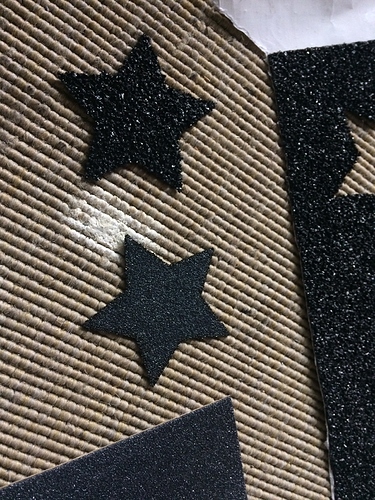 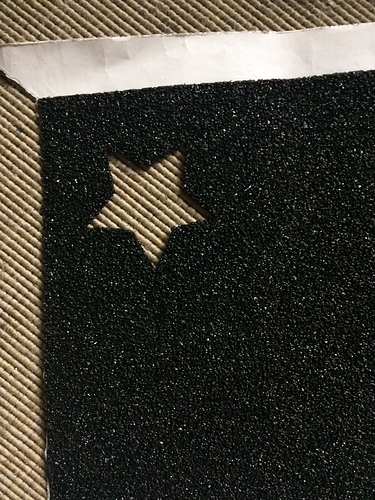 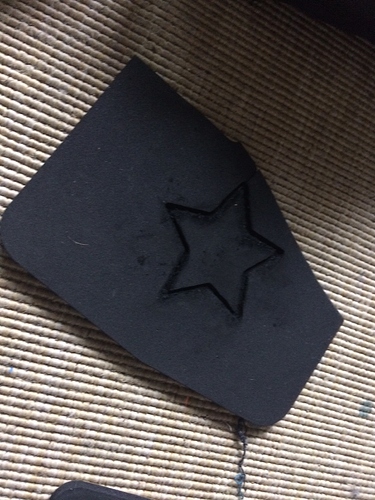 I’m also looking to find a way on how to get automatically the 6 passes. I had to resend 8 times the code to the carver manually.