Y axis not moving, only noise

I had my X-Carve for about 4-5 years and today the Y axis stopped moving, it just make a rumble. I checked the steppers, and they are OK so I think the “channel” that controls the Y axis is malfunctioning. I tried to move the potentiometer but I just get the rumble noise to become stronger or weaker with it…

did the stepper controller when bad? to the touch the chip is really hot when doing the rumble, probably 60C or more. But this is the first time I ever touch it. I ordered a new PCB but I was wondering if there is some easy fix (resistor, cap) that I could do.

If its the board its most likely the driver chip that is toast.
You could get a replacement chip from Mouser etc I would recon.

check all the wire connections. I had this happen and that’s all it was a wire had come loose

I checked all. Sadly it was not the wiring. I am surprised that the chip does not has any burn spot or anything signaling its failure.

It was the Y IC fucked. I bought a new board and I will fix the old one as a spare.

It lasted several years, but just to be extra cautious I just cutted some pieces of copper heatsink for the new one 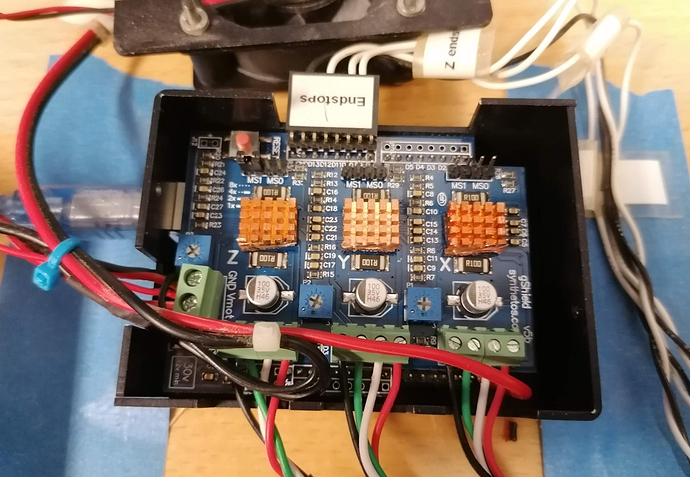 Not many people left using that board. I used one for quite a while but eventually built used the same arduino to drive a higher power stepper driver. It was one of the best moves I made. I had huge issues with the gshield. One of the main problems it had was y axis driver overheating. The way the fan is built, hardly any airflow hits the Y driver as the blades only blow directly on the x and z. I ended up swapping the fan to pull air and drilled a bunch of holes in the housing to encourage airflow under and around the whole board. After I did this I had no more issues with heat, which likely contributed heavily to your board failure.

Well, I do not think the main dissipation occurs directly on top of the Y driver. The whole PCB also heats a lot. Your assumption might be correct, but what I actually think is that the Y driver has double the load, so that is why it is more prone to fail (if that is the case), not because airflow.

I am pretty happy with it in general, such a simple and cheap thing to fix

BTW, do you have a rule of thumb for the potentiometers? I ended finding the start position (where they start to move) and turning 1/4 turn more. Seems to be working ok but on the RepRap world there are specific numbers to check (voltages)

@eried
What kind of stepper motors do you use today?

I think Nema 23. Almost everything is stock in my X-Carve 2016. I just made some

With the current drivers and Nema23’s you will not be able to take full advantage of their torque, due to lack of current. As you mention, for the Y-axis this power is further reduced to half (of already too little) for each stepper.

Since you are capable of swapping out a bad IC you would have no problem making a new controller for around $60. 4x TB6600 stepper drivers can take your Nema23’s to max and its a world of difference.

OK, thanks. I never had lost steps in the past, but the pots were untouched, and I did touch them now

hahah so basically my question is: which setup is the factory one?

Yes double the load, but the driver can still only provide a certain amperage. It cant over draw. You are correct about bottom heat dissipation, bit the downside to the housing is it doesn’t encourage airflow under the board. I drilled the holes and then used some foam and tape to encourage the airflow to wrap under the board.

My method for setting amperage was to get it to move and then super scientifically, I would resist its movement with an amount that I felt was greater than the forces it would experience. The 1/4 turn seems like a good method, I’d just put some force on it to make sure it’s enough. My main consideration, however, was thermal shutdown. I’d run it as high as I could without having it lose steps due to overheat. Once I did heatsinks and cooling mods, I never again had overheat induced step loss caused project scrappage.

OK thanks! Im in Norway so if I open a bit the window the overheat is never a problem