History leading to issue…Have been running my xcarve for about 1.5 years. I recently upgraded to xcontoller, and have been running that successfully for 2 months, maybe 20 hours of run time. In that time, it’s been working pretty well. In the middle of my most recent carve, the z axis stopped working. I checked the usual suspects and saw that something came loose on wire block of z carriage. I put that back and now I’m only getting grinding when trying move Z. I’ve since swapped the X and Z at the xcontoller to rule out the stepper motor going bad. The issue followed the wires. Does that rule out me having to open up the case and mess with dials? A also made sure V wheels were loose enough.

Do not mess, measure.
If the issue follows the wires it means that it is unlikely that the stepper driver is the cause. If you want to measure the current please read the background information from Pololu on stepper drivers. stepper driver details This is for reference only as I do not own an X-Controller but the working of the stepper driver will be similar.
If the power on the motor is too low the motor will make grinding noise.
You can measure the power by putting an amp meter between one of the leads and the wire block, put your device in DC mode (AC will not work).

Are the leads long enough to cut an additional 10mm and do the rewiring with a fresh part of the wires?

Oh man. This is going down a road I was really hoping I wouldn’t have to. I thought somehow the xcontoller would make my life easier in cases like this. I don’t even own an amp meter. Thanks for the reply @ErikJanssen. Sounds like I’ll be putting making things on hold while I get my electrical engineering degree

If it followed the wires and you just had a wiring issue, check all other wires for the Z motor. Remove all of them from the terminal strip and inspect for broken wires. You may have a wire that broke inside the terminal strip that you can’t see unless you take it out. If you’re using bare wires, you may want to consider using some spade terminals on the wires.

@JustinBusby Good suggestion. I now have some spade terminal connectors en route. I will reconnect and inspect, once those arrive.

@JohnChamplain I sure hope that’s not the case, but will not be surprised if it is. Pardon my ignorance, would the stepper driver be on the control board or part of the motor itself?

@PhilJohnson From those two choices, I’d assume port disconnecting b/c it hasn’t come back since, i.e. no stalling and continuing.

Thank you @JustinBusby. I’m going to double check that today to make sure I wasn’t dreaming, but yes, when I swapped the Z and X, Z was working fine again.

@PhilJohnson Is that blue carve button in Easel? I had been testing w/ UGS, but will fire up Easel for more troubleshooting.

I’m going to double check that today to make sure I wasn’t dreaming, but yes, when I swapped the Z and X, Z was working fine again

Make sure you plug the X motor into the Z axis on the XController and then try to jog the Z axis (which would move the X motor) in addition to jogging the X axis which would have the Z motor connected to it.

Not doubting, but why would USB power be in play here? I didn’t think the controller, and further the motors, would be getting any power from USB on computer, only gcode. Regardless, I’ll see what UGS shows when I get out to shop in a couple hours.

The Arduino uses a lot of USB power. The ports can only supply so much

I keep reading this again and again. To get the USB label you have to meet the USB spec. The original USB ports should deliver 500ma per USB port. Doesn’t mean that some manufacturer’s don’t cheat on this issue.

I have measured the current draw on the USB port hooked up to the Arduino with a gShield attached.

The current draw was 50ma. You should be able to run almost 10 Arduino/gShields off of one USB port as far as power goes.

I don’t dispute the claims that using a USB powered hub fixes the problem, but whatever the remedy involved, it’s not likely to be power.

The Gshield/Arduino might be more susceptible to this but the XController is powering the Arduino off the 24V supply (regulating it to 5V) so it shouldn’t depend on USB power.

XController is powering the Arduino off the 24V supply

Over current draw through USB can happen in multiple scenarios.
One: you plug in the x controller before turning it on. It will try and draw all the power it needs through USB
Two: you turn off x controller while plugged into your computer.
Three: you hit the emergency red button during carve.

All three of these trigger USB protection on my MacBook and requires a reboot of my Mac before I can discover/reconnect to the x controller again.

Over current draw through USB can happen in multiple scenarios. One: you plug in the x controller before turning it on. It will try and draw all the power it needs through USB

Not true. The only thing the USB power is connected to is the “reset” pin on the FTDI chip. 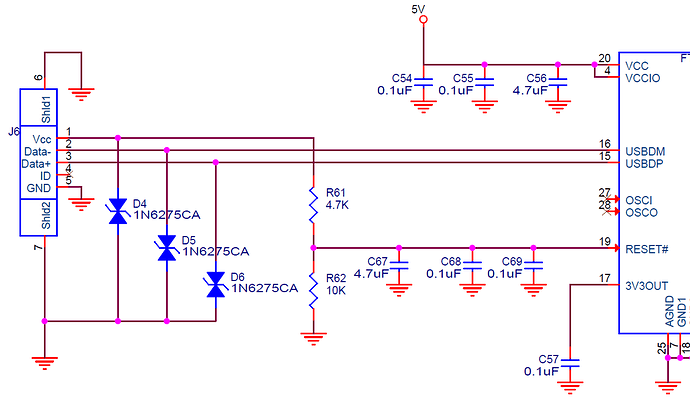 Able to get out to the old shed shop over lunch. Current status:

I attached a short audio clip. No movement to see.

I have been doing One and Two for a long time now. That’s my typical workflow as rarely pull out that USB cable from my computer.

I triple checked swapping the X and Z at the controller. The issue went from Z to X.

If so, then you have a bad Z driver output from the XController and you’re best bet is to contact Inventables for help.

Thank you @JustinBusby, thanks all. Support has been contacted. Always painful when one of my favorite tools is out of commission for an extended period.

Doing any of those makes my Mac unable to connect without a reboot. Maybe it’s not a power issue, but it’s definitely a problem