I submitted a ticket yesterday for my Z axis not holding position when carving. I have included pics and videos for the ticket to show the carving head dropping during jog procedures, along with pictures of failed carves and a broken bit as a result of the Z axis dropping during a carve and not retracting high enough at the end of the carve. The ticket was escalated to engineering and I have not heard back in over 24 hours for updates or additional troubleshooting procedures. I reached out in a reply to the ticket earlier in the day around noon…EST… no reply. I suspect the stepping motor as the failure, but I am not an expert by far. I emailed support again today about trying any recommended actions regarding troubleshooting… no reply. Very disappointed in this lack of reply, especially going into the weekend with jobs in play that need the X-Carve Pro for processing. Crickets for a reply is not acceptable as a response to the system being down for inaccurate carve requests. My test is for a .3" carve on a 1" square and the Z axis drops during the carve and produces a .428" carve in 3 passes with a .10 request produces .428 pocket is not a profitable scenario. Any help would be greatly appreciated. I have enjoyed the system thus far, and I look forward to utilizing it to it’s fullest capacity going forward.

have included pics and videos for the ticket

Can you post something here?
A pocket being carved too deep could be caused by any number of things. The more info you share, the easier to diagnose.

Thanks Neil! I hope this helps a little. The tension on the drive belt is pretty stout, IMHO.

Hey Mike, When you perform a manual movement does the amount commanded equal the actual amount moved? IF not then the $102 setting was likely changed when you performed the Machine Setup in Easel.

video does not sound good to start, it sounds like a banging of 2 metals… …also it looks like the stepper is rolling back after a movement. can you provide the whole list of the grbl settings? and maybe a video from the outside showing movements … also, was that vide recorded using manual movements or a send gcode? (if manual is used the torque lock might not be set right and it will “relax” and not hold position after a manual movement, when it does into Idle)

Wow Seth! It’s like learning another language. I’m fresh into CNC and drinking from a fire hose. Thanks for the reply. I participate in the Glowforge forum and I try to help folks over there a good bit. I hope to improve my knowledge here and be able to help folks with the fun as well… Well off to your questions…

When I perform the manual movement the command does equal the amount requested, then the stepper motor sometimes slides backwards, but like I said sometimes, not every time I bump a manual move. The vid was recorded using manual movements. I do appreciate the tip you had about the torque lock. I’ll pay special attention when I am making the request in the future and watch the behavior to see if it matches your description.

I powered everything off last night and I started all things back up this morning. Oddly the dropping Z-Axis behavior has stopped. I performed a plane on a board and used the probe as before and all went well. It does not leave me with confidence that it just works today after having the machine drop Z-Axis moves over a two day period.

As for the movement and the sound that you mentioned. I only have my machine for reference. The 1" request is a little more smooth sounding. The .1" is kind of loud and forceful sounding, but it works. The machine is quite smooth sounding when running the Homing procedure, and very smooth when running.

The sporadic not working then working is sending signals of connection issues. The connectors used to plug into the controller board on the X-Carve were notorious for shaking loose when the controller is mounted to the workbench as the CNC during rough cutting. It one wire is wiggling it could explain what’s going on for your CNC. just something to keep in mind if the issue rears its head again… But hopefully yours mysteriously fixed itself and you’ll be good for some time to come!

I like the confidence in it mysteriously fixing itself. The realist in me is saying it’s either me, or the machine. I’ll say weird machine behavior, until I can determine otherwise. Thanks again for reaching out and giving a few pointers and tips. Greatly appreciated. I am still genuinely loving the machine so far!!

Michael, I am currently having the same issue. I went through machine setup and got it to “fix” itself, only to have the issue reoccur again after several carves. But i also could see it visibly slipping once it got to a certain depth while i was trying to set my X and Y Zero.

Tech had me attempt to add tension to the z axis belt, which helped for a little but then the belt slipped again.

On my latest carve, the X-Axis started to grind at the left side in the middle of the carve and now makes an awful squeal on the left limit side. Now, its slipping on the x-axis as well.

Let me know if you learn anything else on this issue, as I am stumped as well.

Any word on your problem? It seems like I am running into the same issue. When I am jogging the spindle to set the starting position, the spindle (z axis) slowly falls.

I am having same issues. Slightly moves down ,
I opened up the top of the Z where the. Let is, and doing same thing.
I am having issues with homing too, when I go into machine inspector , after homing, it I get error messages
I was getting around with homing but the Z axis slipping is messing up my carves and find my self having to Z probe 3-4 times before carving and making sure it doesn’t carve the tool path

This is the picture 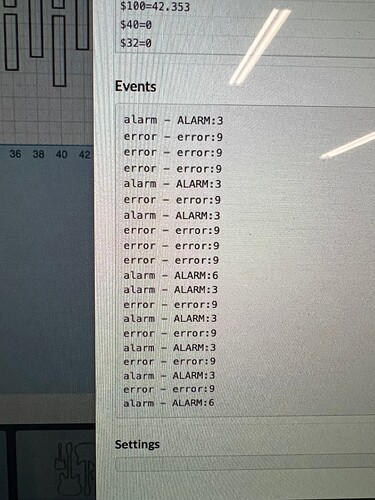 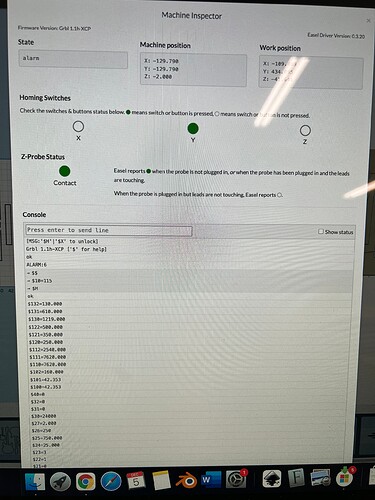