Hello… so I finally was able to finish my Xcarve assembly (1000mm) and running through the easel setup I cannot seem to get through the z probe setup screen… insert to carriage, put clamp on spindle collet and then touch disc to collet… I do not get anything from here… also had a question about the spindle being setup for auto (dewalt 611) but thats a wurstion for later I guess… very new to this !! Clearly !! 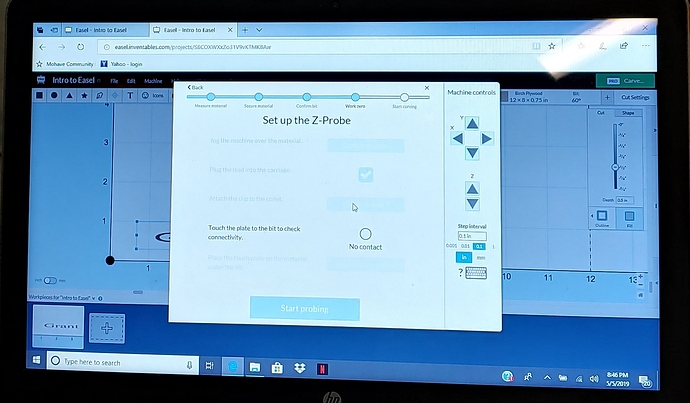 So with my probe plugged in the screen still says no contact even with the probe plugged in. But if I unplug it it says contact. And nothing happen when I touch the plate to the bit? So with out the probe setup I can’t 0 out my bit before my cut? I’m getting frustrated and losing patience.

I’m getting the same results as you. With the probe plugged in clamp on spindle collet and easel still says no contact? I’m new to this too.

After you plug it in and attach the clip the next step it will prompt you to touch the probe to the bit. Did you actually touch the plate to the bit?

Yes, Im actually on the initial startup/calibration stage… its a bit frustrating but Im only a day into having this thing built so Im just hoping its an easy fix

Hi Steve, thanks for the reply. Yes I plug the Z probe in, attach clamp to collet nut and touch the plate to the collet and nothing… Ive even tried with a bit in the collet. Looks like others have had the same issue as Im having.

Just to add some clarification in case it wasn’t clear, when you get through the settings and it asks for contact, you do have to physically pick up the collet and hold it to the bit so that it’s physically touching for a couple of seconds until you see the circle turn green on the computer to indicate that contact has been detected.

Outside of that, this may be obvious but have you gone back and checked every connection where you connected the z-axis wiring to the various control points to be certain that they’re all connected and tightly?

I am in the same boat as these other two people and I can’t get mine to connect either. I have physically picked the disc up and touched it to both the bit and the collet for about 20 seconds each with no change on the setup window.

I have physically picked the disc up and touched it to both the bit and the collet for about 20 seconds each with no change on the setup window.

Have you used a DVM to measure resistance through the probe cable, verifying continuity?

At one point I had to solder one of my connections in the plug, might be work checking to be sure each end of hte cable is connected well in the clip and the plug to the puck.

Thank you for suggesting this. I think the wire is the problem. I am getting connectivity for the disc on both red and black and getting connectivity for the clamp on both red and black. Isolating the connection wire it appears to be fine so it has to be the wire that goes to the x-controller. Dang. I’m going to have to reroute that at some point. Sigh.

Dave, Thank you for the reply I appreciate your help. I have in fact picked up the plate to physically touch the collet and a bit installed also. I am going to try a meter to make sure everythings ok. Thanks for the replies everyone, hopefully this will do it

I found the culprit. It was the Z probe wiring connected to the green port on the X controller… You have all been great help!! For some reason the red wire was under the contact and was clearly loose but appeared to be connected. Thanks again!!

grant were you able to figure out the issue? Mine was a simple wire being connected to the green adapter incorrectly, being under the contact when screwed in tightly.

Yes I got the bit to finally contact the plate. The problem was the female part of the probe there is a loose wire inside the cable because I have to rotate the male probe for it to work properly. Thanks for your help John and everyone one else.

I’m sorry, but I have to say, for starters, get out of Easel. Yes, it’s free, and thanks to Inventables for making it seemingly easier and cheaper for new users to get started. But,I don’t want to be tied to the internet which could crash at any time. And then, Easel is “limited”.

So, very quickly after my X-Carve purchase several years ago, I transitioned to Vectric s/w, and, yes, I eventually upgraded to their most expensive s/w, Aspire, But, eliminating at least some of the million variables associated with CNC (or 3D printing) is very helpful.

So, I eventually learned how to deal with GCode. Initially, it was a “no, not another s/w language I have to learn”. But, it wasn’t that hard and I know exactly how to program the probe (and other things) and it works every time.

So, please don’t get too frustrated, but, understand, that CNC, like a lot of things in life, requires an investment in time and learning. Carve as much as you can, don’t expect everything to be a “Mona Lisa”, and you will learn a lot and get better every time.

I don’t mean to “talk down” to you or belittle you or others in any way. I went through a hard learning period myself. I did have a Z probe problem and someone, on this blog, gave me the answer - I wasn’t allowing enough “time” for the probe to find the contact. It was a “Gcode” solution. I’m sure I’ll get disagreements from others, but, I now think that you have to learn something about Gcode to be successful in CNC.