New vac table for a new project. Holds down thin materials for cutting without clamps. 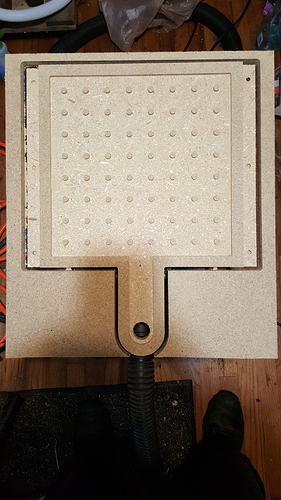 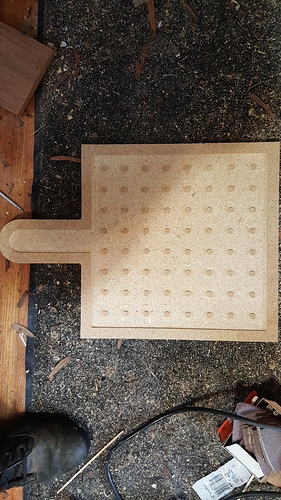 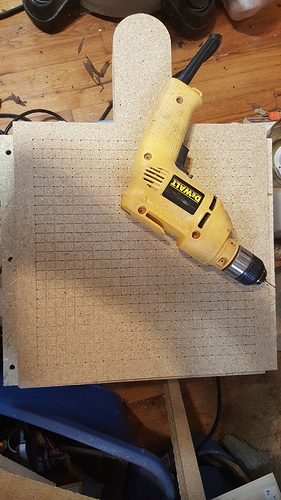 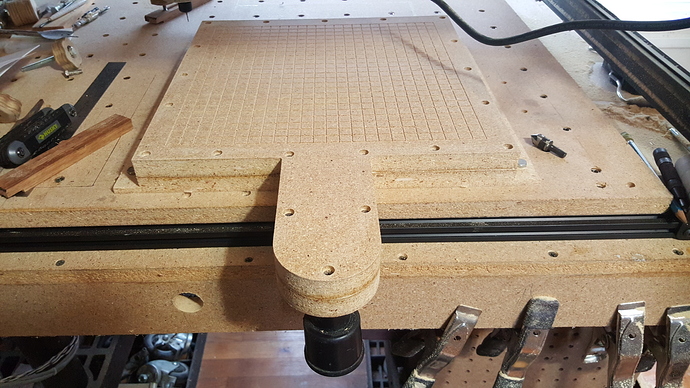 thanks. I have an accessory part to make yet that will allow me to use the same table for vacu-forming plastics.

Have you tried it out yet? What are you using to seal between the layers of MDF? I really like it, could use for a vacuum forming table as well I would think. EDIT- I was late on that reply.

It’s screwed and glued with titebond. Yes, they work. I have a small one and a 20x20 made the same way and I’ve never had a piece of material shift while cutting.

That is awesome. I’m unfamiliar with vacuum tables, why are there the larger holes in both pieces (the pockets) and is the depth of the pockets critical? I’m just trying to wrap my head around the concept. I will probably copy your design as I’m wanting to cut some really thin sheets in the future.

oh, those aren’t holes. They are unmilled so when the halves are together they create an internal post structure so no flex in the top.

there are 625 1/16 holes drilled where the score lines intersect.

This may show up better. 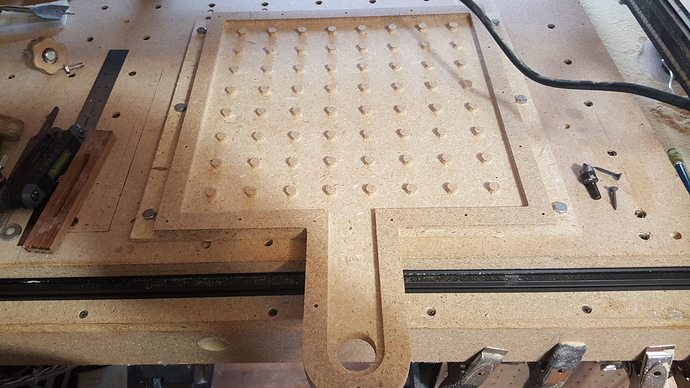 Love to make one of these, looks great. Did you drill all those holes by hand? Come to think of it, does Easel have a drilling operation? Last I looked I couldn’t find one. Anyway, very cool.

Easel does not have a drilling operation nor do I have a collet for 1/16" bits for the 611. I did the drilling in a few different shifts. It really didn’t take that long.

You could write a drilling program and import, but I just knocked it out by hand. Probably faster overall in run time for the spindle.

That’s super interesting! Do you need to use things that cover all of the holes, or just enough % of coverage is enough pull? would love to see this in action!

I use paper to cover the area not covered by
the material to be cut to keep the vacuum up.

They keep more vacuum on the material

I drilled every 1/2 inch. more would be better but that is up to you.

Just curious what are you using for suction? Vacuum pump or other?

I was wondering about a way to come up with a gismo for a suction table, but Im not that smart, lol… At work, I use a gerber profile with the suction table and that cant be beat, is the best . Great job in making that up. It looks really good.

Angus, the score lines will barely be there after I surface the top but eventually with use the top will be covered with shallow marks from cutting. I try to be as accurate as possible on zeroing, but it is unavoidable.

The cavity is only 1/8 deep in the top so there is plenty of material to resurface multiple times.