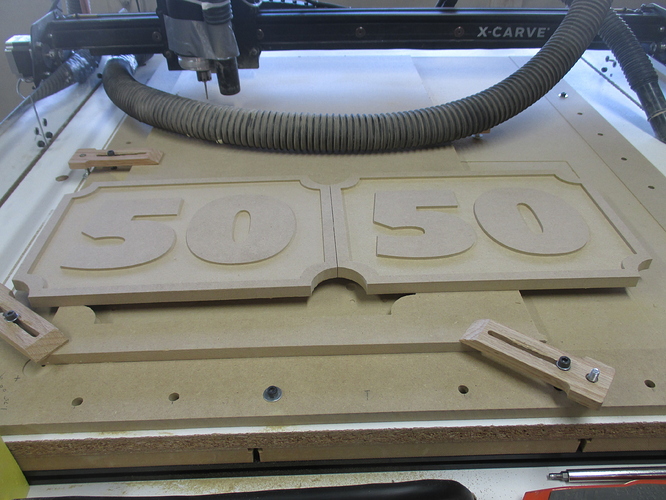 For the record, I would suggest a DOC slightly less than the final depth of the pocket, just to allow a cleanup pass of .010" or so, and a speed of 180 IPM. It would end up taking about 14 minutes, and would leave a cleaner bottom and slightly smoother side. I did that with a second piece, which reduced the 611 cut speed to only 7.5 times faster than the 24V spindle.

Awesome comparison! Are the finishes similar?

I think the 611 finish is actually better, especially with the .010" cleanup. The deep pass around the outside has a much nicer finish, and the edges just seem a little sharper. The bottom of the pocket feels slightly more “fibery”, but that’s probably because the bit didn’t say on the material long enough to give it a little bit of a polish. It may also have been a different sheet of MDF, so it’s hard to assign a true cause for it.

That is so incredibly encouraging. I’ve been on the fence about when I’m going to pull the trigger on the 611 and wow, I am sold.

I actually had it up to 340 IPM doing feed/speed testing, but the edge quality was slightly lower than at 250 IPM. It was going fast enough that I actually had a faceshield on because I was afraid the bit would break. Plowed through it like butter. Dusty, dusty butter.

You better not to encourage newbies Robert. They will start racing on work piece.

To me, work quality and health of my machine is lot more important than time.
I go highest 120 ipm on MDF, 50 to 60 on very hard woods like OAK. And you know what, when you go slower, you don’t have to waste time for clean-up pass.
Of course I’m not even talking about depth per pass, it depends of job complexity. M2c.

Does Easel use the spindle type in calculating the ‘suggested’ IPM and DOC, or is it just a straight lookup into a table of wood types? In other words, is the suggested DOC and IPM specifically for the 611 or is it a generic number?

My gut feeling is that it’s all based on the ideal settings for the original 24VDC spindle, I don’t remember having to pick a spindle type in Easel. Maybe @EricDobroveanu or one of the other awesome Easel coders can give a better answer.

Now, during machine setup, you pick the spindle to use in Easel, but I think your gut feeling is right in that the feeds and speeds are probably set for the lowest common denominator.