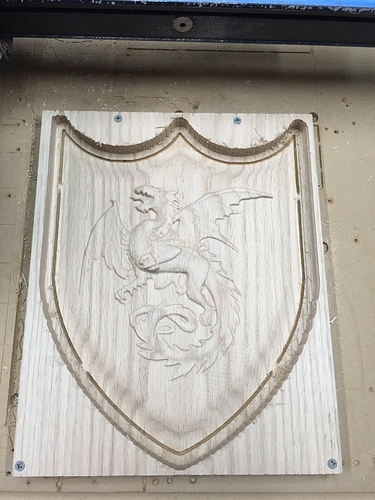 I used a VCarve Pro clipart shield and a dragon model (in stl format) I purchased online from 3d Model Club.

I finished it with a light coat of stain (minwax gunstock) and 3 coats of Tongue oil. 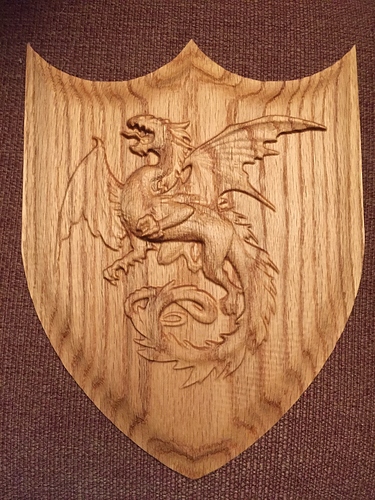 I was amazed at how thirsty the wood was, it soaked up the oil in a mater of minuets. Dry to the touch in less than 5 minuets for the first 2 coats, less than 10 for the third.
(The wood was one of the larger planks from the $6 box of “firewood” that has been sitting in my garage for months now.)

There are 3 versions of this clipart shield. This version tapers to a very thin edge so I am concerned about the points breaking off if it is roughly handled. Next time I will use one of the other versions of the shield which had a thicker edge.

This was made as a wall hanging. I may mount it on another board to help protect the thin edge.

I have a question about surface finish.
If you look careful at the lower right hand corner you will notice a ripple in the surface of the wood. 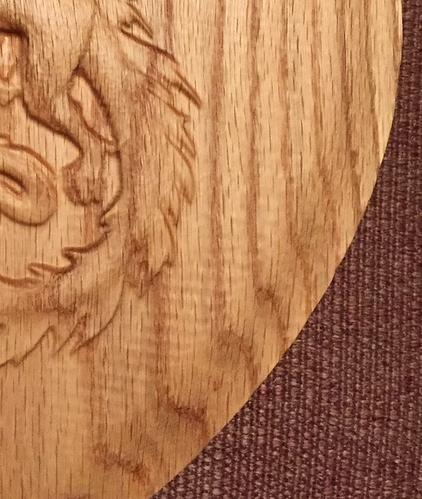 It is very subtle, barely detectible by touch.

The thing is this rippling follows the couture of the cut lines from the ball nose bit on 3d carves. I don’t get it when using the end mill for pocket cuts.

So I am wondering what is causing it?
Looking back at the other photo is it part of the initial carve so it is not the stain making the wood swell. I guess I just don’t see it until the stain makes the ripples higher contrast. 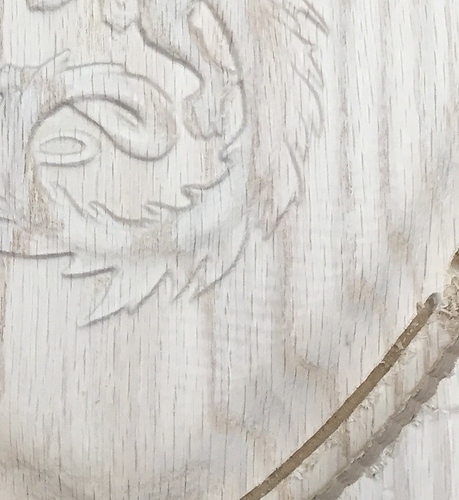 Any ideas what is going on here?

I am trying to figure out if this is some kind of chatter related issue?

My best guess is that the ripple is caused by the bit deflecting and or the gantry twisting just enough to change the z depth ~.1mm or so?

What is throwing me off is the way to follows the cut lines, seeming to happen in the same place.
Maybe it is related to the compressed dust that builds up on the V rail?
Making a “bump”?

I am using GWisard to calculate my feed and speeds as well as my depth of cut to minimize defection. And this did minimize this effect when I was working with redwood.

V Wheels, pullies and belts are checked before each cut.
And the V Rail dusted off. (but that builds up again during the print)

Any input would be apreceated

Not sure about the issue but that looks great!

It might be related to the grain in the wood. The hardness of the wood changes as the cutter passes the grain lines. The machine may not be rigid enough to overcome the cutter deflection as it goes across the grain.

With a ballnose, for a nice smooth finish, you may have to decrease the stepover to get rid of the lines. What stepover did you use?

(*Feeds and speeds calculated by GW)
I have been a little hesitant with the feed and speeds numbers that GW has been coming up with but have been getting good results so far. Other than the ripple issue of course. My results have been pretty good. And much improved from some of the random numbers I was throwing at the XC.

Using the Dewalt router? I usually do my finishing passes with a ballnose at 1.5 or 2 on the speed dial. And for feedrate usually about 120 IPM, I’ve never gone that fast with mine. In oak, I would go even slower about 85ipm for a smoother finish.

This is just me and my settings.

Yeah that was more in line to what I was running before but I have been running test with the GW calculator and scanning CNC cookbook.
And these are the more conservative numbers.

(Though it does want a slower RPM that the dewalt can do.)

Maybe I am pushing the machine too much.
But the rest of the carve comes out great. If the whole carve was affected I would not think twice and just adjust the numbers.
This is so dam subtle, and it is not happening in the more challenging areas of the carve. (Where the depth is a bit deeper because the roughing bit could not clear it, or a knot hole, etc.)
This ripple seems to happen in the smoother areas (consistent thickness) and if anything in the areas of softer wood.

Ultimately the answer may be “cut slower” but even so I would like to know what causing this. I was hoping someone would see it recognize what was causing it:
“Oh yeah you got your (blank) set way too high”, etc.

Oh well. The best way to learn is to keep doing!

I get the same ripples when I go too fast. I had a belt that got caught by the smooth idlers once and it caused that, and damaged the belt. I ended up replacing and tightening the belt.

Thanks for the tip. I will take a hard look at my bets and axis movement.

You can see the ripples on the left side…oddly enough, also a dragon…lol 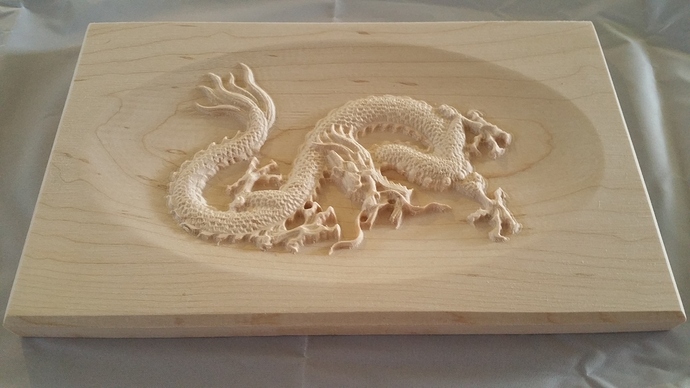 Yeah same thing, and in the relatively smooth are of the carve.

Brainstorming…
In the more detailed areas there is more Z movement. The Z axis plunge speed is significantly slower so could it be slowing down the whole cut? Reducing the average feed speed in that area?

The areas on mine that are affected are spots where the is little to no z movement, so max feed speed?
They also seem to happen in corners of the spiral pattern.
Maybe the change in direction is loading the bit more?

So things for me to try,
do a control carve,
carve one with raster rather than spiral pattern.
carve one at 90% feed speed.

That dragon is sweet. Can you share the STL or is it a paid deal?

Here is the link to the dragon stl file, it was a sample. https://cloud.mail.ru/public/FbDF/mSnPhTVcd I'll try to get the cross stl file done today...just getting home so it may be in a day or so.

Thank you! Those scales are AWESOME. Can’t wait to cut this in some walnut. 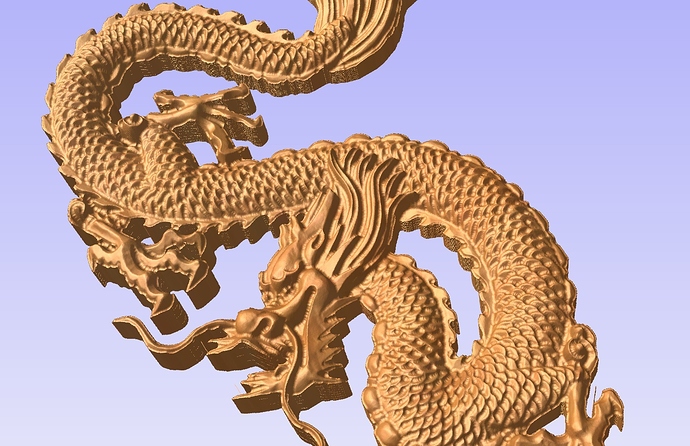 Can someone make a tutorial on how to make a 2.5D carve? I can’t seem to find a good tutorial anywhere and a dragon would be a great starter project!

Btw, they both look amazing!

What software do you use?

VCarve pro
The shield is part of the clipart that came with the program
The dragon I purchased in stl format from 3d model club.