We have been experimenting with 3D laser Diode engraving here at picengrave dot com. We used PicEngrave Pro 5 to generate the gcode and cut into 1/4" Poplar board. The settings we used is a Pixel Resolution of .006" (step over and step ahead) and a set feedrate to 85IPM.

Our Feed Rate Change feature was used to expand the shades to the point it cut into the wood to different depths based on the shading in the image. With the 88% FRC setting we used, the black areas ran at 10.2IPM at full power of the Laser Diode and cut to a total depth of .125". This is not a fast process, but the detail we achieved with the Laser Diodes .005" focal point is amazing compared to doing this with a larger spindle rotary bit.

Here are the results. 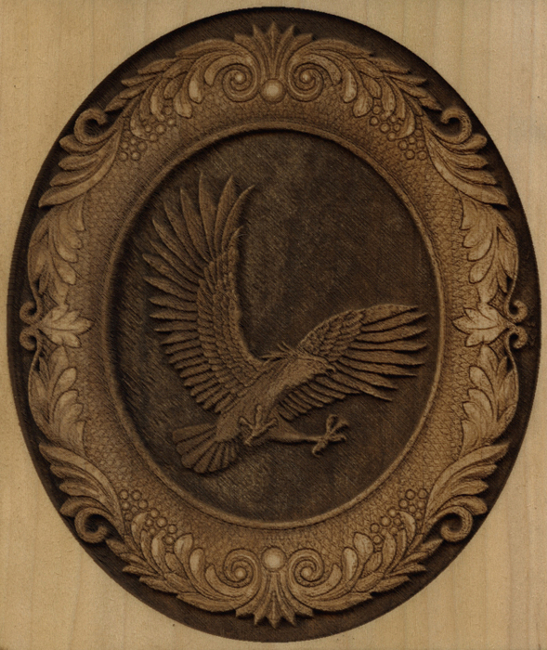 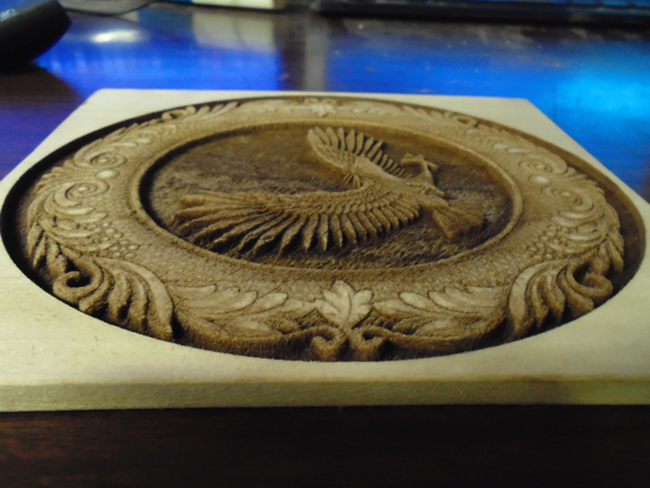 wow i would love to incorporate a lazer onto my x-carve. out of curiosity how big is the finished peice and how long did it take to engrave? and was this done with an xcarve or your own machine? nice work

This was done with our EmBlaser, but will be testing the 3D engraving with our Shapeoko 2 and the J-Tech Laser in the future.

My chin just bounced off of my desk…

We are using an air assist we designed for our EmBlaser to ensure precision and maximum depths of cut. 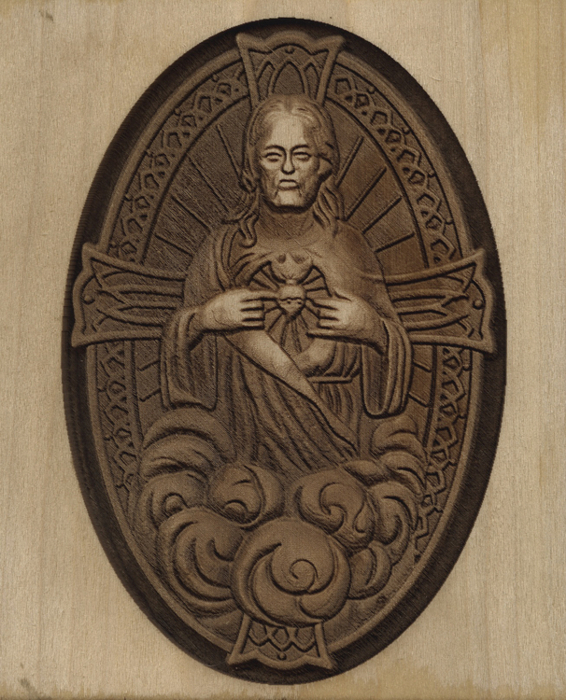 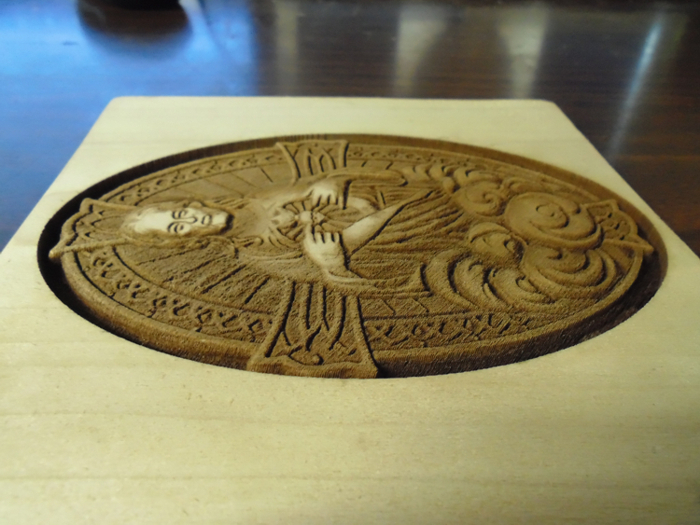 PicEngrave Pro 5 can also be used to spindle engrave in 3D when using a grayscale Depth Map image.

I’m very pleased with the results of this one. 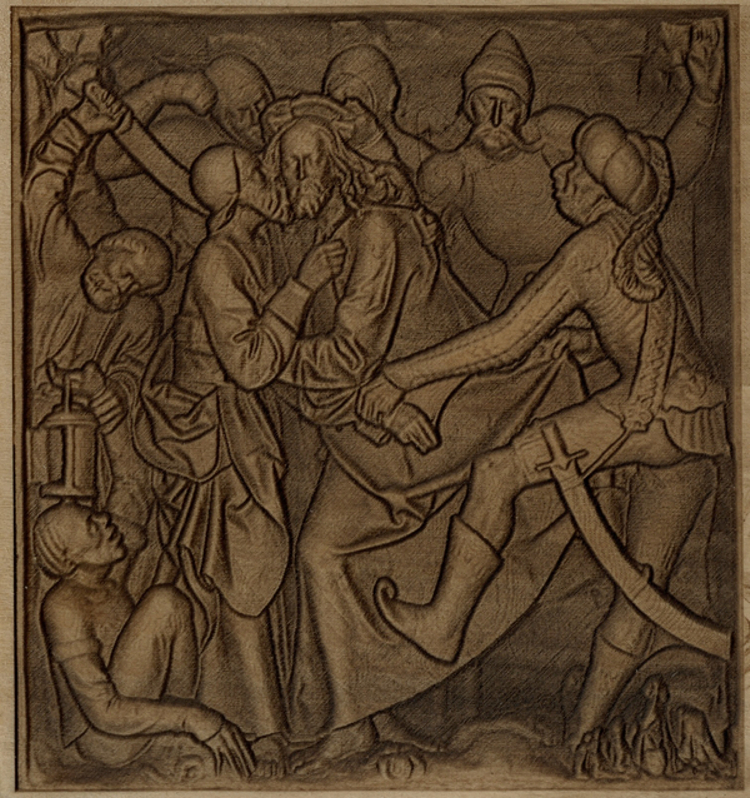 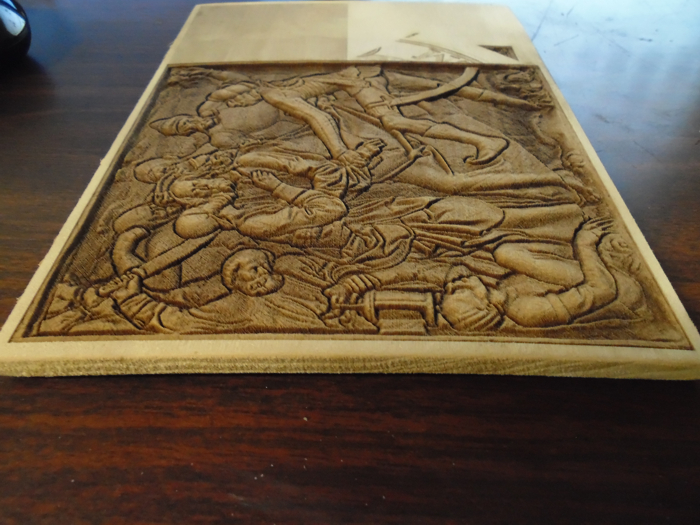 Here is the image we used to generate the gcode. 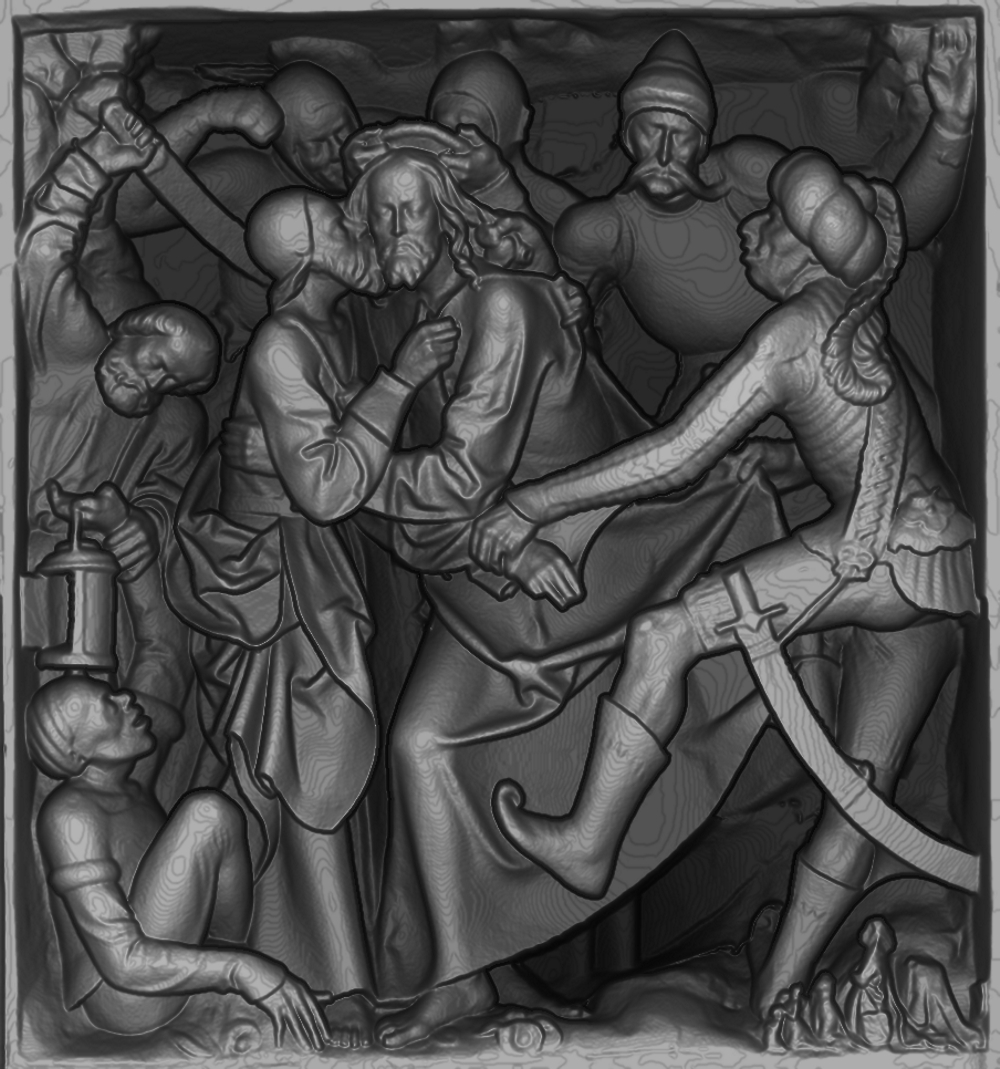 A perspective of this 3D engraving.

do you create the 3d files yourself? if so what program are you using?

We are working on a way to generate the depth map images our self, but not quite there yet. We have been downloading free reliefs from this web site.

You have to get the ones that have the BMP depth map images included. We then edit them and generate the gcode in PicEngrave Pro 5.

We just finished a new build on our Shapeoko 2 using a 6W 450nm laser Laser Diode from DTR. We were able to reduce the 3D engraving time almost in half compared to using the 2.8W 445nm LD. We are still refining the settings in PicEngrave Pro 5, but here are the results of a 3D engraving that just finished. It’s 7.875" X 5.25" in size with a.125" total depth of cut. We used the J-Tech grbl with S20-S255 laser power commands, a variable feedrate (Feed Rate Change) and streamed the 507,365 lines of gcode with our PicSender program. 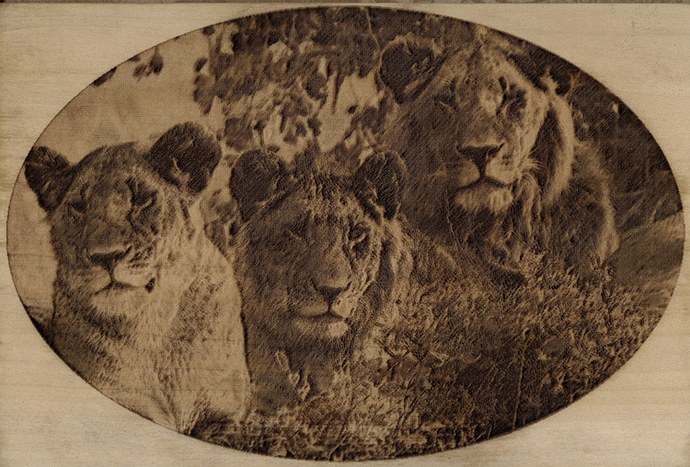 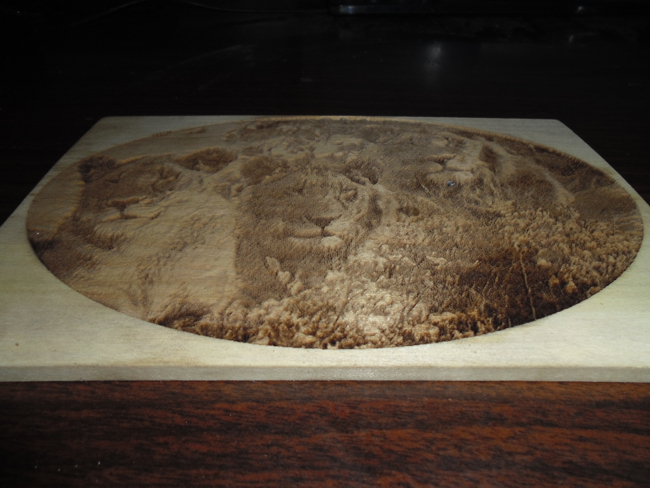 That is really nice.

Only problem I have is having to change the Grbl firmware. I really don’t want to have to do that on a machine that cuts as well.

Does anybody know if Grbl will ever get to the point where spindle cutting and laser marking could be done with the same firmware and retain limit switches etc. ?

Sonny stated he will be implementing laser support very soon for grbl.

We have no need for limit switches. The laser beams threshold power makes an excellent edge finder and we have a T-slot table with stops to consistently locate the material and ensure it’s square with the axis’s.

Look at Step 1 in our instructables.

Here is a 3D engraving using an Air Assist designed by us with a 6W 450mn Laser Diode. It’s made out of Delrin and is screwed onto the lens thread and seals against the laser module. There is a hose barb in the side for the air to enter and both the laser beam and air exits out of the tip through a 10-32 SS set screw with a .04" orifice.

I Gaussian blurred the image to smooth out the toolpaths, but I blurred it a little too much and lost some of the detail.

The gcode was generated with PicEngrave Pro 5 with a variable feedrate on each of the 737,935 lines of X,Y,Z & F gcode and was streamed with PicSender using grbl 9J.

The Flexmod P3 laser driver’s modulation is controlled with a US Digital 10bit MA3 analog magnetic shaft encoder driven by a nema 17 stepper. This setup allows me to switch from the Z axis stepper to adjust the laser’s focal height from the material, then switch to the encoder’s stepper to control the laser’s intensity with Z axis depth commands. 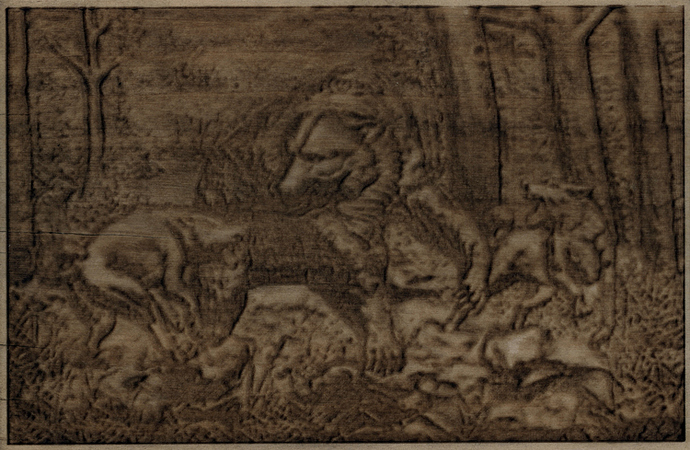 This one I made the background white in the image and used Skip White in PicEngrave for optimizing the toolpath so it limited the travel area and cut down on the engraving time. 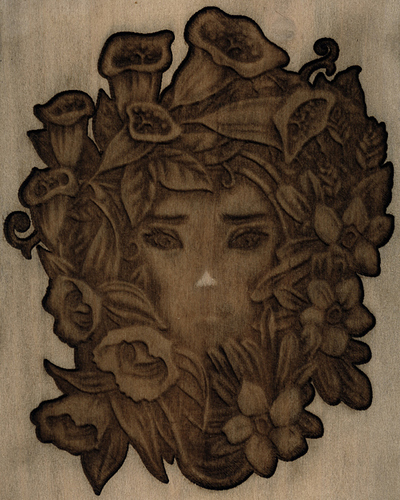 Used Skip White Background in PicEngrave Pro 5 again for this 3D Laser Diode engraving streaming Z axis power commands with PicSender to grbl 9j. It was a no brainer. 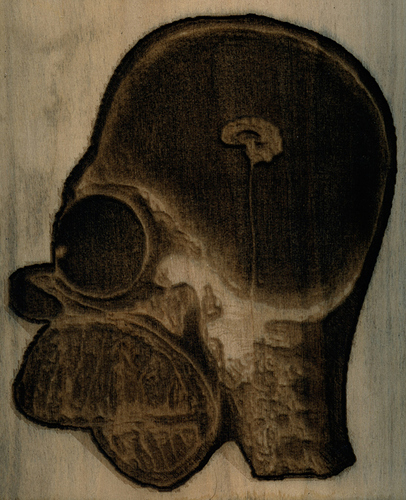 Looks good! Are you able to share the package of 6w laser, air assist, and driver details? Or will you be selling a package like that? I am also interested in finding out if that set up would etch glass directly without a requirement of painting the glass and etching away the paint. Thanks.

Our 6W setup is the same one in our instructables, except it has a 6W laser diode instead. Also I changed the encoder placement from the Z axis stepper to an independent hybrid nema 17 stepper motor, but I’m still using Z axis commands to control the intensity. You can see it in the video I posted above.

The laser driver is the same Flexmod P3 we used in our instructables. It will output a max of 4a. That’s a safe max amperage for the 6W laser diode.

I don’t think the 450nm wavelength will etch glass even at 6W without painting the surface black first. The black paint causes the laser beam’s focal point to be real intense at the surface. This causes the glass to fracture below the paint and so the laser beam does not just pass through the clear glass.

The air assist we developed for our Shapeoko can be made on a lathe. It was turned out of black Delrin and screws onto the laser’s lens thread and tightens up on the laser module to seal it from any air escaping there.

We also tapped the tip of the air assist for a 10-32 SS set screw with a .040" orifice through hole for the laser beam and air to exit. We run it with a 10PSI regulated air pressure from an oil less air compressor.

We don’t sell laser systems or components, only software to generate image engraving raster gcodes for CNC machines and of course, a reliable gcode streamer.

Thanks for the feedback!