Is there an alternative way to connect the PWM Spindle and limit switches (step 14, parts 13 and 14) other than crimping + header? I can’t get the wires to crimp well, and then I can’t get the header to stay affixed to the pins. (Even when the crimps are properly inserted into the header, the pins just aren’t holding onto the header.) All the other assembly steps went smoothly and were fun, but this one is not.

I don’t have a crimper tool, which is probably half or more of my problem. I see one other poster solved this with header jumper cables. Is that my best alternative?

What I did was, I soldered shorter pins to Gshield, gives much longer pins for connecting headers. All you have to be careful, don’t insert short pins all the way down, just enough insert to solder. This way Header plastic doesn’t hit out window aluminum when you push Gshield down. Works nice.

I crimped mine very carefully with artist’s long-nose pliers, then gave them just a very careful dab of solder over the crimped portion, just to be sure. I had to modify my housing by about a quarter-inch to get sufficient clearance under the header pins, myself.

Thanks, all. I also used needle-nose pliers and a dab of solder, which worked for getting the “crimped” wires together and into the header, but the header still wasn’t binding to the pins.

So I scavenged a 9-pin connector ribbon from the junk electronics bin. Its header binds wonderfully to the pins, and then I just separated and stripped its cables and twisted them together with the limit switch and PWM spindle cables and taped them with electrical tape. It’s ugly but works, my machine has power and is going through setup now.

I’d recommend revisiting this part of the design, perhaps switching to jumper cables or some other solution that doesn’t involve crimping tiny parts with fat fingers. 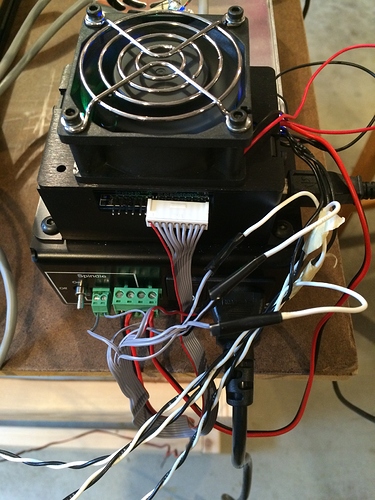 I also crimped, then (gingerly!) applied solder to the crimped pins to make sure that end didn’t detach. I did find that the little header connector didn’t want to stay cleanly in though, especially because I used beefier wire for the PWM control than that 22awg hookup wire (that didn’t even seem like it would stay in the crimp or in the terminal block on the PSU, so I probably caused part of the problem with more wire stiffness).

I also have all my limit switch wiring going to a breakout terminal block right in front of the PSU/gshield/Ard assembly, so the actual long limit switch wiring isn’t always ‘pulling’ on it. The grounds are all tied together at the terminal block with one leg extending to the ground up at the gshield which was another cleanliness advantage. Hope to put up some pics soon, probably in the ‘show off your workstation’ thread although my table is nothing special.

A breakout terminal sounds great. I couldn’t fit all five ground wires into the single tiny port as the instructions described to do, so instead I soldered another wire to the limit switches and plugged that into GND (with the other two black wires). It’s still a messy nest of wires in front of the G-shield though. Definitely something to improve upon.

Forgive horrible cellphone pics; up early with a thunderstorm and too lazy to break out the real camera. First pic for context - my ‘table’ is just a base and a couple back leg extensions atop an ancient Craftsman (as in Sears, not the furniture style) metal workbench. SFF Dell refurb $150 puter visible on a shelf behind; monitor is on an arm but not in image above that. I cut my wiring a bit long and have everything soldered with terminal spades, then all electronics can be easily replaced later as a separate entity. 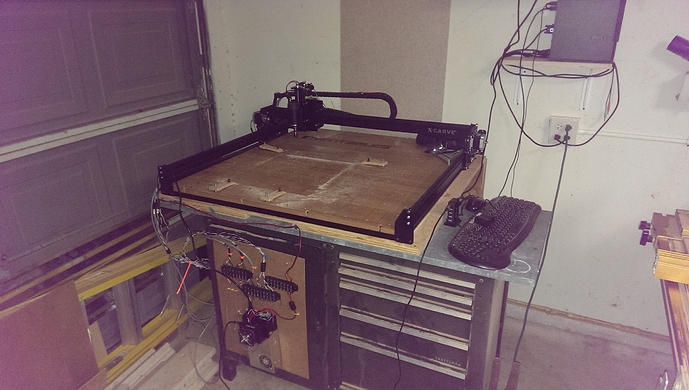 Second image shows electronics closer. Panel (just spare fiberboard) hangs from bolts thru the door front of cabinet. I probably need a dust shield to keep stuff out of the Arduino/gShield enclosure. Don’t mind some of the wire colors at the header…I stripped out some excess from some of the 4-conductor 18 gauge supplied as motor wiring since I upgraded to 16 gauge in my actual chain routes. Since I used 18 gauge vs. 22awg for the PWM control stiffness was an issue, but by having short runs to the terminal block I could prebend and get it to stick, for now. Will see how well it maintains contact over time. You should also be able to see the grouhds for the limits jumpered at the terminal, with only one wire going around to the gShield ground terminal block (green). 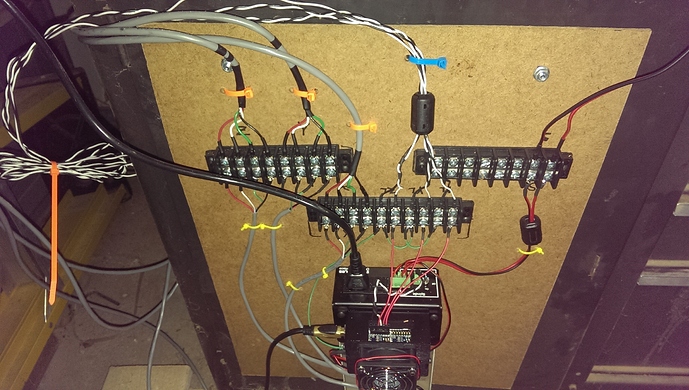 You can also see I’m using some ferrite clamps on both the limit wiring and the spindle power (have some at each limit switch and at the spindle on the Zaxis end as well) to try and suppress noise; probably need caps at the electronics end between limit high and ground…breakout will be an easy place to add them if so.

Also not sure how visible it is, but rather than ‘testing’ which limit or motor wiring was which I used bands of heatshrink BEFORE pushing them thru the chains, so I could tell later, then replaced them after final trims to length and such. There’s a wide headshrink piece to clean up where shield/jacket were stripped, then behind that zero short bands is X, one is Y, two is Z. Same on my limit pairs. Lastly, the spindle power line is routed as far from everything else as possible (clipped to outside of drag chain even) in anticipation of DW611 upgrade when it (seems like ‘inevitably’, judging from posts) fails.