I have been trying to cut useful small ink stampers but not been very successful.

I tried cutting the stamps on 2" x 3" linoelum blocks and the cut went well. But the linoleum simply doesn’t hold ink from ink pads well enough to be used effectively as a stamper.

Then I tried cutting this soft rubber material that I bought from Amazon (link below). But the cut ended up very ragged looking and the result was totally unuseable. Perhaps that was because I used an engraving bit. But if an engraving bit is wrong then I don’t know what other type of bit to use?

I thought maybe a 1/32" downcut fishtail bit, but I don’t have one available to try. So before I order one, I was hoping someone could set me straight on the best material and bit to use to get fine detail on an effective stamper? 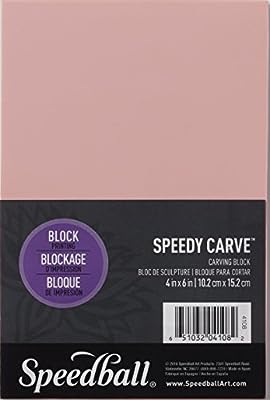 Try using a hockey Puck from the dollar store. And an upcut bit.

Realized that the cut on the material I got from Amazon actually works. When the material is fresh cut it looks ragged as anything. But all it takes to smooth it out is some rubbing with my fingers to remove the large ragged pieces and some brushing with an acid brush to remove the smallest pieces.

FWIW, I tried a pass at cutting one block with an upcut bit and it literally ripped the material into pieces! But an engraving bit works, as I mentioned above. And I’m willing to bet that a downcut bit would work, and possibly work better, since my goal is a smooth top surface.

I’ll be ordering a couple from Inventables to try that.

I’ll also try the hockey puck! Thanks for the suggestion @MarcCohen.

The material averages about .1" It is better to only cut .06-.08". I learned early on the the adhesive is water based and exposing it to humidity and water based inks/paints results in failure.

I did the hockey stamp a while back

I have been wanting to try this for a while and finally gave it a shot. Yesterday I stopped by Second hand sports and picked up a couple of used hockey pucks for 79 cents each and threw them on the X-Carve to see how they worked. I used a 1/16in Freud router bit and they cut like butter. [image] [image]

That’s weird. I’ve done a ton of linoleum stamps/prints and they all turn out great. Is your ink drying between the time you apply it and stamp it ('tis the season)? Are you using an ink roller?

Not using an ink roller. Using ink pads with the linoleum blocks. And they simply fail to hold enough ink to make decent stampers. The new material from Amazon has now proven to work fine; once one understands what needs to be done to clean up the stamper after the X-carve cuts it.

Okay, that makes more sense. So in this instance ink pads don’t work with linoleum. It’s not an inherent weakness of the linoleum itself, just the application method.

@MidnightMaker: Well yes and no. The linoleum is denser and more rigid than the Amazon material (which makes it cut cleaner initially). But the rigidity of the linoleum allows it to flex less than it needs to so as to provide a cleaner image when stamping. It is also not as porous as the Amazon material and that’s why it doesn’t hold ink as well.

However, the trouble with the Amazon material is that, even on the slowest Dewalt 611 speed setting, it tends to heat up and melt just a bit; just enough that it doesn’t get thrown out and away from the cut as one would like. So some rubbing and extra effort is required to clear the cut of the cut shavings.

it tends to heat up and melt just a bit

Heat is caused by “rubbing” - when the cutting edge of the bit passes over the same spot multiple times. So if you can’t reduce you RPM’s you increase your feed rate. Thought you may need to reduce your depth of cut to match the faster feed rate. Too fast a rate may tear the soft material so it may not work.

With acrylic I think some people were floating Windex? on the surface to help cool it?

With wood you can re-run the cut file a second time to help clean up the fuzzes. if it is a long cut, you can set up a cleanup operation. A second, full depth pass. You can usually run it faster as it is not actually cutting.