Calibration of steps Per mm

So, a new cut was made - With half the speed. And it still showed the same variation

Then you can probably disregard tool deflection as a main contributor unless the sideway forces are very very small on both test cuts.

I had to cut an aluminium bracket, and that turned out (before cleaning the sides) with the size of 150.2x150.2mm. It was supposed to be 150mm. After i’ve filed the rough sides i believe the measurements would fit perfectly.
So i think it must be due to backlash or something else mechanical.

I had to cut an aluminium bracket, and that turned out (before cleaning the sides) with the size of 150.2x150.2mm. It was supposed to be 150mm. After i’ve filed the rough sides i believe the measurements would fit perfectly.

Then you are right at where you want to be

@HaldorLonningdal - i had to cut another aluminium bracket today, and it failed miserably

the circles weren’t circles and the profile path failed

Does this seem way to high?

What diameter bit? Did it gum up the aluminium?

I Used a Carbide bit so my rpm was roughly 25k.

The alloy is of unknown grade

I didnt see any “gum up”. However the chips came off like snails though, not really chips. So maybe this wasa sign of Gum up?

Chips shaped like snails or similar = okay most likely.
The bit didn’t gum up, that is good.
This might happen with too high rpm / slow feed rate or too deep cut and will degrade cut of bit and lead to gum up/failure.

I would try to cut a 25x25mm pocket say 2-3mm deep with the following settings:
Spindle rpm, as low as possible
Feed rate 1200mm/min (or 800mm if you want to start slow)

@HaldorLonningdal So! I Tried what you mentioned, though I cut a circular pocket instead.

The circle was supposed to be 25mm in diameter.

I checked that the steps were correct, and it matched spot on still.

I’ve taken a photo of the pocket 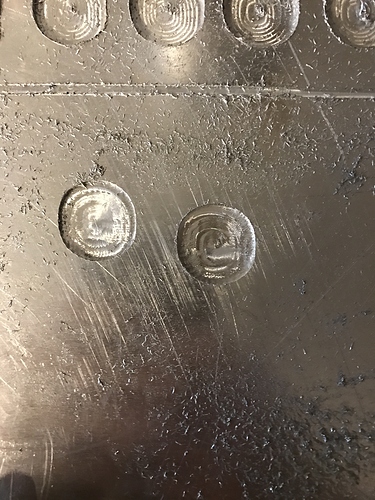 Jesus this is frustrating… 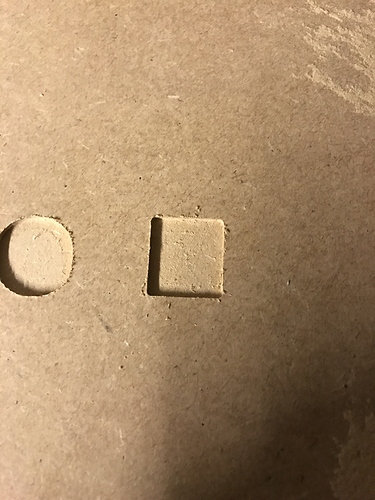 The cause for smaller size it machine/tool deflection => feed rate/depth too high.
We need to step down speed and go as shallow as possible.
The tests you have provided indicate there is some play in the mechanics of your machine

Try 400mm/min at 0.1mm DOC and se what you get as far as dimension goes.
It might be necessary to perform a finishing pass to get closer to wanted size. Say for a 25mm circle I may run the full pocket, then run the same code again with path set to “inside” only at reduced feed rate. This = a finishing pass and should bring the carve closer to spec.

But the test in mdf was the same speed AS in alu, 0,1mm doc and 1000mm/min :S thats Lampard like cutting in air right?

i dont have a very long ruller though, mines abort 20cm long.

Wether or not the calibration is spot on, we are unable to tell. But what I can tell you is that your machine has slop.

Look at your circle pockets, the left/right side are not true circular but more flat. This indicates that during the transition in X-direction there is some slop/drag at play. (assuming that left/right in pic is X-direction)

Regarding calibration all machines have some degree of slop/tool deflection, most commercial systems account for this in software and compensate that way. Have you carved a simple slot and measured the width carved by the bit? A 3mm bit may not be exactly 3mm.

Can you try the following:
Run this code once - http://easel.inventables.com/projects/-vRkouw1SuCbKPZDnf1D1A#
Then run this code once without any change - http://easel.inventables.com/projects/S6cCS4QK7XJaH0Z9PAorTA#
The idea behind this test is to see how a rough pass and a finish pass behave relative to eachother (since the sideway forces are very different.)

Will do.
Do you want me to run it in MDF or Aluminium?

Could the flex come from the Yaxis? since my machine is the 1000mm one theres seems to be quite some flex in the y rails, when i push on the carriage.

Aluminium would be nice

“Quite some flex” = about how much?

Any flex will create cut deviation.
Your larger cut defects stem from left/right flex (X) . If the circle top/bottom are flattened then it is Y-axis that resist.

Well, by the looks of it, just moving the carriage on the rails actually proves around 0.5mm flex in the y rails, in the x direction (if that makes sense)…

I think i’ma stiffen the y-Axis with some aluminium brackets first!

Isnt it more the X direction that is shorter than expected? Since the Y-axis is closer to the wanted size?

Large one: x: 29,4 y:29,5
The finishing pass obly made cutting sounds when it hit the bottom (I accidentally set zero too low) 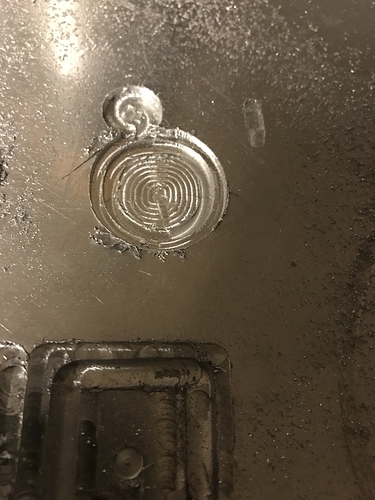 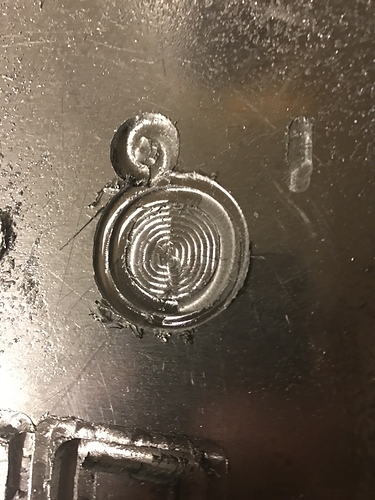 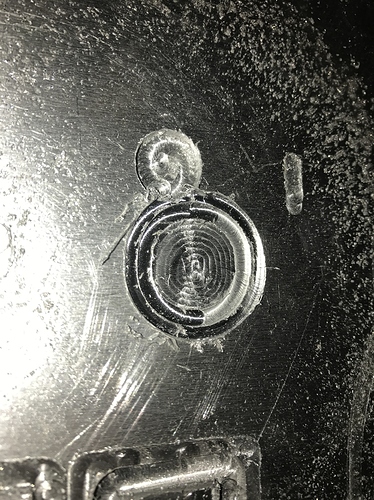 So basically you are now about 0.5mm undersized in both X/Y direction => not too shabby.
I would leave the calibration consern be for the time being as I think you should redirect your attention to the machine itself, reducing flex /give in the system.
Judging by the circle test your bit is dragging, the left/right side of the circle is flatter => your X-axis is dragging during transition from +/- travel. The Y may indicate something similar but to a lesser extent.

How is the quality of the cut at the bottom of the pocket? It is difficult to judge alu by photo but is it smooth or rough?
Any details on the bit used / pic? The cut edges look a little rough.

It can be frustrating, but keep focus on one thing at the time and learn the why’s & how’s of your machine. They all are a little different. Aluminium is not the easiest material to machine consistently and well

The bottom is silky smooth

No edges or roughness.

When you say draggin, how would i test that?
The machine doesnt give any wrong sounds. As i did those cuts i was only able to hear the dewalt noise and some light hissing when plunging in.

The bit i use is a Carbide 3mm TIAIN coated end mill, 2 flute. I’ll take some pics of the spare one i have right beside me in a sec.

I’ve mounted brackets to the y-rails, which has actually dampend the machine noise and also given alot of stability.

However, could this still be due to v-wheels being too tight on the X or Y ? :S