Cannot connect to xcarve from Mac

I’ve gone round and round for two days trying to get my new xcarve to run through Easel on my Mac with zero luck. I’ve ruled out any hardware issues on the xcarve side as I’ve been able to run three jobs from a windows 7 laptop and even recognized the Arduino board in a new boot camp install on my Mac to try and get it running. Is there a secret to getting easel and xcarve to work on with OSX?

I have had the same issue with all three of my macs. Runs UGS fine, so it “sees” the Arduino. And an older pc laptop runs Easel with it fine, so everything should be ok with the machine. After a couple of requests through the forums and an email to the Inventables help desk, several suggested fixes have been to reset grbl on the Arduino (https://inventables.desk.com/customer/portal/articles/2058884?b_id=9562&t=0) and make sure that the gShield is completely connected to the Arduino. Having done all of that, I still cannot connect and will at some point have someone from Inventables help me with a remote log in. Hopefully on of these will get yours up and going.

What version of Mac OS X are you running @CoreyAllen?

Maybe also try using ChiliPeppr. You just need to download the Serial Port JSON Server from inside ChiliPeppr and when you launch it, it will show you what serial ports it found. 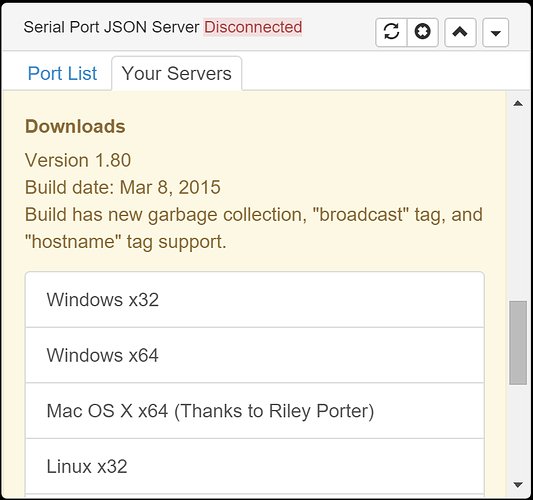 BTW, make sure if you are using multiple apps that you disconnect from the serial port from the app you are no longer user so that it’s not locked. Only one app can open a serial port at a time.

This problem has been apparent for months. Since it only seems to be a problem for some people with Macs, Inventables does not seem to be doing anything about it.

I have a fully functioning X-Carve, working perfectly, doing some great engraving . But I have to operate through UGS (Universal GCode Sender). This means I have had to find something other than Easel to generate the GCode.

I just wish that Inventables had someone reading this forum and at least indicating whether they acknowledged the problem and were taking it seriously. I have had contact with their help desk and the only advice is reload GRBL, check the wiring, etc. But I know the machine is working perfectly, and I have a standard Mac, running an up-to-date version of OSX. So I conclude it is a software fault in Easel.

If you cannot even run Easel to produce gcode then your Mac has serious problems.

@IanWatkins I can’t say for sure in @KevinKarney 's case, but a lot of us were having trouble getting Macs to connect to Easel, so as to control the Machine. I am able to use Easel to generate g-code, but then I have to use UGS to run the code on my machine.

I use an old Mac mini to drive my X-Carve with no problems whatsoever. I use UGS the majority of the time, however I have used Easel on multiple occasions without any problems.

Whilst I can understand your frustration, I’d suggest that the issue isn’t an Inventables problem. Almost certainly there is a problem with your setup, your software or some kind of configuration issue.

More than happy to assist if I can help.

I know it’s obvious, but have you tried disconnecting everything from your Mac (unplugging everything but the xcarve) shutting down all software, rebooting and then begin with easel from scratch?

Also, make sure you boot up the Mac BEFORE plugging the XCarve into the machine. If I leave my machine plugged in when I reboot, it won’t find it for some reason…

On top of @DavidWestley’s suggestions, have you installed Easel Local?
this has the be installed on your machine before Easel will work, so if you haven’t or even if you have, you may want to go and install it.

If you get an “unidentified developer” error popping up, just right click (two finger click on the trackpad) on the Easel Local and choose “Open” from the menu that pops up. It will give you a different warning, with the option to open anyway. Once you do this for one app, that same app will open with a double click from then on.

I have only really seen 3 people with this problem on the Mac so I’m not sure that qualifies as “a lot of us”, but I can understand the frustration. Especially when the majority of the Mac users with X-Carves just plugged it in and it just worked right off the bat.

@paulkaplan is there a direct link to get Easel Local if you have already installed it and need to re-install it?

I did install easel local. I think I even removed it and reinstalled it. In any case, Chrome reported that Easel local was installed. Can you confirm how to remove it an reinstall? I’ll try that again just to be sure. Also, I didn’t mean to suggest that the problem is widespread. I was trying to distinguish between what I’ve seen going on, and a much more fundamental problem as suggested by @IanWatkins.

Waiting to see if there is a direct download to get it again, because I just checked the link on the dev help and it is broken.

Hopefully you’ll be able to download it and reinstall it. Then I’d do a restart just in case.

… but if you want to manually remove it and try and have Easel reinstall it, then here are some steps that will remove it. Attempt at your own risk.

Hi Ian
I am using OS X 10.10.5, Safari 8.0.8. And I have tried latest versions of Chrome & Firefox. I am an experienced Mac user (I bought my first 128k Mac in 1984 - I wish I had kept it!). I have tried everything (restarting with no extensions, etc). The issue is that UGS connects very time and the X-Carve itself works perfectly.

Did you see my post about trying to reinstall Easel Local?

Thanks sketch42
Yes and I have tried the full de-install and reinstall of Easel Local. No luck. If GCS finds the right port, why can Easel not do so too???

I assume you can run Easel ok just cannot use the Carve menu? I.e. Can design just cannot control the machine.

If you have tried reinstalling EaselLocal like Jeremy suggests, and you are super sure UGS or anything else isn’t grabbing the port, then I’m afraid I am at a loss.

The only time I’ve ever had any USB problems on a Mac (I’m a big user too) is a couple of hardware synthesisers really didn’t like being on USB3 sockets but fine on USB2.

I think my final suggestion would be to contact help@inventables.com and ask.

Sorry, don’t know what else to suggest.

That’s a good question. @KevinKarney are you able to use Easel to create a design and under Machine > Advanced export the gcode?

I’m guessing you probably can, but it is a piece of the puzzle.

I’ll keep looking for / thinking about a solution, but if you decide to contact Inventables support again then I would try talking to them via their support number.

I took one final step to try to resolve this long-standing Easel bug. I moved my big heavy weight iMac from my study to my workshop. Reinstalled Easel Local (doing it according to sketch42’s full procedure.) Restarted the Mac, tried with Chrome, Safari, & Firefox. Still no joy. I can use Easel to generate Gcode so that side is working. UGS continues to be the only way I can use my X-Carve, which otherwise behaves flawlessly.

All my software is up-to-date. I have no firewalls

I understand that Easel is not yet working properly with Apple’s soon-to-be-released El Capitan OSX (which I have not installed) - so i hope that Inventables will have a good look at Easel’ software.