Recently I’ve upgraded my X-Carve, and ran a few aluminum test cuts. They all seemed to turn out fine, so I started milling some more advanced parts. I took these parts to my friends dad, who is a machinist, and he told me that my parts show chattering and my machine is not sturdy enough to mill aluminum without suffering from this issue. Now that I understand this issue, it has become quite a concern, especially since I notice the problem getting worse. What I want to know is how to reduce, or remove this problem. I have tried tightening the bolts, checking connections, belts, etc, however I cannot find an issue, and it seems as though I cant even run the machine at 10ipm, without suffering from chattering and this horrible noise that resonates through garage (Whereas I was running the machine at 60 imp). I also don’t just want to remove chatter, but to make my machine faster and more efficient, much like the one shown in the video. 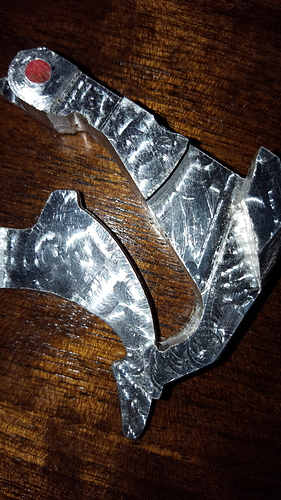 For any more detailed photos of my machine, or parts I’ve milled, just ask.

Need a bit more info about the machine. 1st or 2nd gen? Stock Z? Etc. Give as much detail as possible regarding upgrades . Motors, pulleys and belts, bracing.

While watching the video the OP posted on this it looks like a 2nd generation 500x500 machine with the linear rail Z axis shown at http://store.knucleon.com/zplunge-linear-slide-assembly/ which is whom the video is from. I have milled aluminum with what I would consider success and have no complaint’s. he is milling with much greater speeds and DOC and seems to have a wonderful chip coming off the material.

If anything I would slow my speed and see if the chatter is at least reduced.

I read the post as the OP wants his machine to run like the one in the video, not that the machine in the video was his. My bad if I was incorrect.

I really want a new Z-Axis as well. I think that’s my main issue, however I notice a lot of flex when putting pressure on the spindle, but the Z-Axis seems to be stable, and it appears that the X-Axis is the one giving me trouble. I have slowed my speed to 10 ipm, from 60 ipm. I also notice that the aluminum is not being cut clean, but it is curling up, and making nice little spirals. I assume that’s just me going slow, and it probably would be fixed at a higher speed.

What kind of rpm do you usually use?

Very impressive machine. How thick are the Y plates? The biggest thing that sticks out for me is that Z axis. Next to the gen 1 two piece x axis, its the weakest link in the machine. There is a lot of flex in the design which works for wood and softer materials but starts to really show when milling anything harder. You would be better served with a linear Z for aluminum. The best would be a direct drive unit. Also with aluminum 2 flute bits would serve better with shallow/fast feeds and speeds. The machine in the video has a VFD so they can most likely run at slower RPMs. You can compensate for this with the Dewalt by running less flutes and at a faster feed rate. If you aren’t losing steps or breaking belts then upgrading them won’t really help with the chatter. You could push the machine harder with the belt upgrade but it’s best to fix one issue before introducing new variables. With the machine off, a bit in and the dewalt at a height you might normally cut at, grab the collet and move it back and forth. You will most likely notice a bit of play. That would be my guess as to where most of the chatter is coming from.

The Y Plates are 1/8" Thick Steel, and they are very sturdy, especially with the extra makerslide I added. I really am considering purchasing a new Z-Axis, but I need my mom to let me spend more of my money, and she is very up tight with finances. I do notice a fair bit of flex when I apply pressure on the bit back and forth, but there is very little flex from side to side which is probably the reason my test cuts turned out, because they moved along the X-Axis. My belts are fine, and seem very adequate for the task. I even have a ball screw for the X-Axis but I haven’t got around to attaching that yet.

What kind of rpm do you usually use?

I usually stick to the lowest setting, I do have a text file showing all my feeds and what not on the first post.

The new Z axis will help a lot. All the force gets put on the lower Z wheel.

The only other thing I can think of is reducing your depth of cut a little. You can’t slow down, you need a high feed rate with the High RPM’s of the router. But if you reduce your depth of cut even more, it will put less of a load on the gantry so less flex.

What software are you using? maybe you can set it up as 2 operations? Even if they are with the same bit. Do the lass couple of passes with a shallower depth of cut for a cleaner finish?

I am already sitting at a 0.01" DOC, I have tried to do a 0.005" DOC and it seems to run ok, but I haven’t texted anything above 20 IPM. The software I’m using is Fusion 360 for generating the tool paths, and Easel just to import them and run the G-Code. I took a look at my Z-Axis and the wheels seem to be fine, the part that attaches to the X-Axis flexes when put under pressure, and the whole X-Axis shifts. However that shift is very slight.

Just my opinion after milling a thousand or so parts on an X-carve like machine… You have a few problems:

I ended up mounting my y axis rails directly to the base of the machine. So, there are no “brackets.” Then, did the axle mod. That with the new Z, increased feed rate, two flute viper and was milling aluminum and other metals like butter.

Once those mods are done, it is very important to put a big ole fly cutter in your router and tram the router to level with your waste board. Even then, mill your sacrificial waste board flat before milling aluminum. And often thereafter. Your aluminum must be screwed down to your sacrificial board. I have seen clamps, superglue, etc… but that is the recipe for a chatter monster.

I find that the old gantry plates are more flexible than the new ones I added. I noticed a lot of flex with the thinner maker slide so I added the 40mm slide on top with the old slides on the bottom. I find this design much more rigid than with the old plates. Plus I really need the extra height. I am planning to get a new Z-Axis that is a for sure, and I am aware of the high feed rates when using aluminum. Once I have finished those I will do some experimenting with some of the 2 flute bits I have. Instead of replacing my gantry plates, would it be better if I replace the belt drive system with ball screws? I have a 1000mm ball screw for my X-Axis and I am feeling more confident with the machine. Also on a final note I use a vise for work holding (That I make sure is square with the machine) and I face the stock square with the 1/4" endmill I have (better than nothing), If I have a larger piece that I need to mill I use the sacrificial waste board and screws method.

Also could you send pictures of your machine, I really want to see what you have done with it.

I need to take pics. Here is a link to some photos of the different pieces: 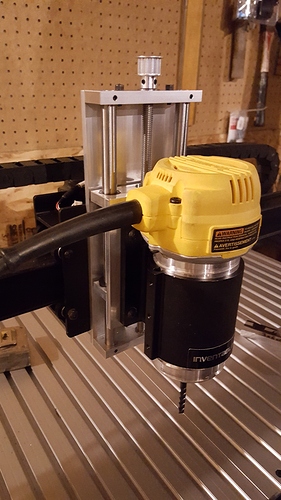 20171009_1330402112×3756 1.42 MB
I just received this new Z-Axis. after installing I tested it for flex, and it appears much hasn’t changed. I tested the Z-Axis itself for flex, and there was very little, which means that the X-Axis makerslide, and carriage are the most likely culprits. Unfortunately I cannot decrease the range because I need a large workspace. Ive started to design a better X-axis, one that is hopefully more stable. 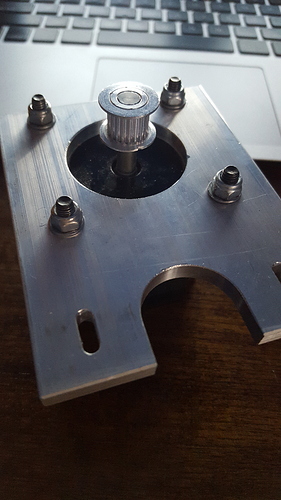 Edit: What do you guys think about replacing the X-Axis with a C-Beam linear actuator?

I just removed mine a few days ago. Those press fit ones are a beast. The videos online of people hammering out the shaft?? Yeah good luck!

I ended up putting it up against me oscillating spindle sander and sanding it down to the shaft, and then punching it out after that.

Someone also mentioned that they used a dremel cutting tool to cut it and then tear it off. Either way should work!

Those pulley systems are stubborn as hell, mind you I haven’t done too much to it because I fear injuring the stepper motor. What ill probably do is just take a grinder to it.

For the record I beat the crap out of the shaft on mine for a few minutes with a hammer and it still works well. I had the same concern, but to save you the hastle, yes just grind it off or cut it.

One might want to heat up the pulley with a butane torch or similar before trying to punch out the shaft.

But would it damage the stepper motors in any way?