Hi Everyone. First time poster here! I’ve been having a lot of fun learning the X-Carve the past month. This forum has been an extremely useful resource in answering almost every question I’ve had so far and am getting tons of inspiration from all the cool projects folks are posting!

I had my first major problem last night with the collet adapter blowing out. The bit didn’t break as you can see but the adapter looks like a cartoon explosion and when I found it, the adapter had melted itself into the dust shoe bristles

My first instinct is that the bit may have not been tightened enough causing the adapter to start spinning in the collet which appears to have super-heated the adapter and bit.

My second instinct is that I may have over tightened it since some of the posts I’ve read have cited this as a reason for collet breakage but since there are so many variables to consider, any one or combination of things could have caused it.

Anyone have ideas about what went wrong? Thanks! 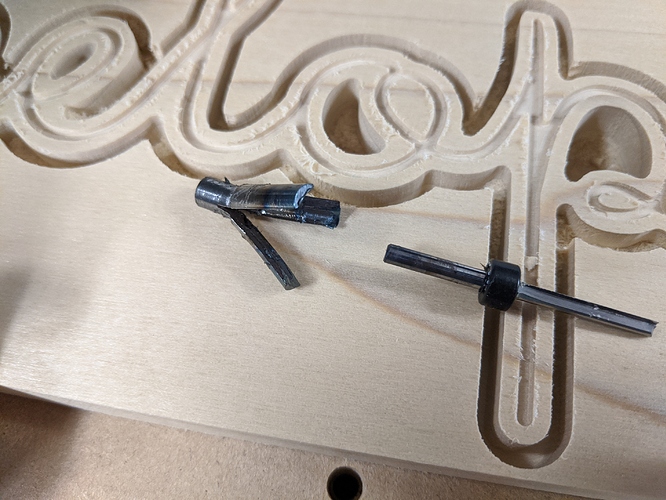 I have never had that happen but it looks in my opinion that it was not tight enough and worked it’s way down and in turn the bit caused the blow out. Just my thoughts.

Edit: You can turn the speed down to 1, running it at 3.5 will just wear out your brushes faster it wont cut any better.

The adapter is the 1/4 -> 1/8 that comes with the X-Carve and was flush with the collet when I put the bit in.

I’ll definitely turn the speed down when the new adapters arrive, thanks for the tip! Would I need to adjust the feed rate and/or depth as well?

I’m still figuring out speeds and depths myself, but I looked at yours and it looks a little conservative. You could probably go up to 2-2.5mm depth per pass and then you can adjust your speed while its running. I have cut poplar with the exact same bit and ran it at
Feed Rate: 1016 mm/min
Plunge Rate: 304 mm/min
Depth Per Pass: 2.5mm
and it cut good.
Good Luck
Russell

I honestly have never seen that happen with a CNC or regular router set up. 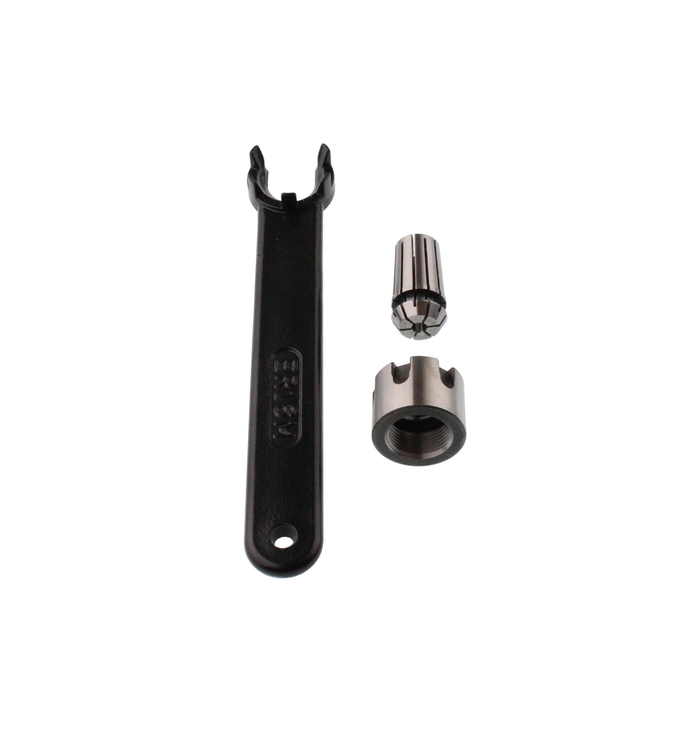 Use 1/8" shank milling bits with your router. 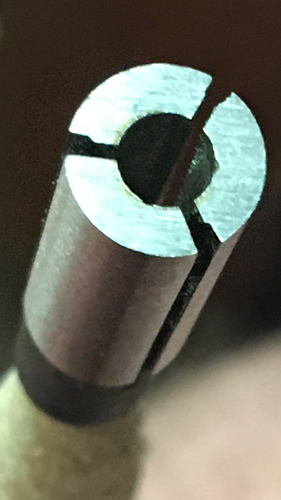 If you had it inserted flush with the collet I would have to agree with Wayne and it was not tight.
I have used the original collet adapter like that one for 3 plus years now without an issue.

That collett have been slipping, heat marks all over it.
Something is not right.

Thanks for the replies! I’ll tighten the bits a bit more than I have and try the suggested settings. I think there’s a kind of tight spot on the threads of the spindle or factory collet that makes it seem like it’s tight but actually isn’t

I ended up purchasing these ones from Amazon based on the Dewalt 611 user’s review of them and that they will arrive within a couple days… I didn’t check inventables to see if they had replacements but good to know there’s the option if these don’t work out. https://www.amazon.com/gp/product/B017I8D1F2

Don’t mess around with adaptors.
Get one of these and your problem will go away.
http://elairecorp.com/dewaltroutercollets.html?_vsrefdom=adwords&gclid=Cj0KCQiA6IHwBRCJARIsALNjViXL2z9xTWMe8cuWlFEdJavUqYqjaFlLYFwGMFMDK5ELnztJVCTNxFsaAttyEALw_wcB#dwpanchor

Woah yeah, those look the business! Thanks for pointing them out. Definitely more expensive but pretty clearly worth it! And there’s a 1/2" version too

Do yourself a favor and get one of these. Best thing I ever bought for use with my DeWalt router.