I have done this hundreds of times in the last several months and it works for me. I draw my projects in AutoCAD and save it as both a DWG (for a record) and a DXF (2007).
I am an Adobe Illustrator user and open up the DXF file, be sure to set the scale to 1:1 (important). I do my text and other things in Illustrator and then save it as both an AI and a SVG file. Easel has read 100% of my SVG’s and carved them great. I am not an Inkscape user, but I don’t see why the same process will not work with Inkscape. I just tried the same thing in Inkscape with excellent results.
I created a rectangle 2" wide and 3" long in AutoCad. I saved the drawing as a 2013 DXF file. I opened up Inkscape and set my drawing to 8 1/2 X 11 and inches as default. Next I imported the DXF, I tried several tomes as a scale of 1 and that did not work. I googled DXF into Inkscape and the answer was to change the scale factor in Inkscape Import to 25.4. Once I used the 25.4, it worked great. I then saved the drawing as an OPTIMIZED SVG. I opened up easel and it imported with no problem. I also verified the size and it was right on. It is possible to at least do the conversion from DXF to SVG with a free program. Those that do not have AutoCAD can opt for a free program called Draftsight. This works just like AutoCAD. This is a free program, but be aware, if you do not have any CAD skills, this program, as any CAD program can be unsetteling. 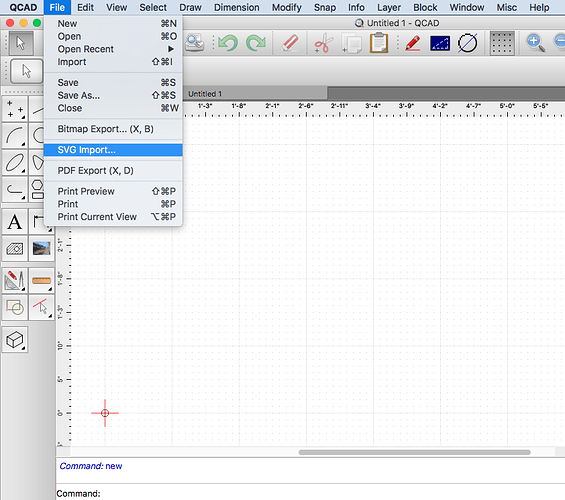 I’ve made a simple command line utility for macOS to convert .dxf (and other formats) to .svg if you have Inkscape installed as this is a common operation:

Edit:
This is a reply to @JeffTalbot who mentions above… [quote=“JeffTalbot, post:18, topic:11756”]
However, we’ll be changing this very soon so that the apps will feed Easel data objects instead. This would open the door to any developer building a DXF file import app for Easel (or any other type of file format).
[/quote]

[quote=“JeffTalbot, post:18, topic:11756”]
Right now these apps feed SVG to Easel behind the scenes to create the designs. However, we’ll be changing this very soon…[/quote]

I interpreted your comments above to mean that not only would you open the door to developers to build file import options for Easel, but that Inventables would also create something allowing what would appear to be ‘native’ import of various file formats. So instead of using separate Easel ‘apps’, you would give us a menu item to import various formats. No?

Any app that implements file import functionality can actually be presented in the “Import” menu instead of in the apps window.

To quote myself “…but that Inventables would also create something…”, I mean, why doesn’t Inventables create the feature for allowing other file formats to be imported directly into Easel. Developers haven’t done it yet and it’s been 2 years since you mentioned a method would be made available for developers to do so, but it’s still not a feature or app that allows it. Can you guys just do it? 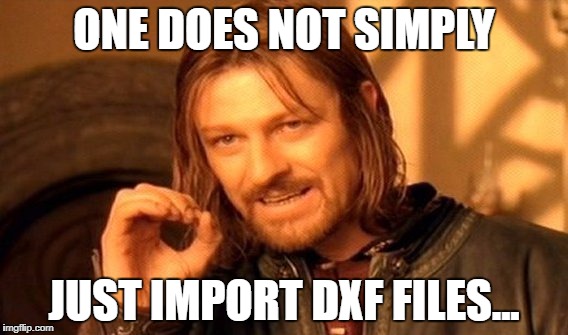 I certainly agree. I’m a self-taught AutoCAD hack and I have had immense trouble being able to generate DXF’s that were acceptable to import/convert…

x-carve hardware: pretty great - Easel however is severely crippled. Importing DXFs is a BASIC requirement for 2D cutting of any sort. The convoluted “solution” of converting DXF to SVG using one or more 3rd party programs is really not a solution at all. Whoever decided that DXF support was fine to “add later” rather than an essential feature at launch and whoever agreed: Really poor decision. If Easel had DXF support I’d likely pay for a monthly pro subscription. Instead I apparently have to look elsewhere for basic 2D cutting features. This has been a huge disappointment.

So stupid question however, how would you transfer this to Inkscape which I have on my Mac to transfer any file to svg! Cause the long method is well long to convert but doable ! Thanks for the code and thanks in advance if you can explain it to me ! Thanks

You can look for a used copy of Illustrator CS5 or CS6. I have had a few times where I imported a DWG from AutoCad into Adobe Illustrator and then saved it as a an SVG. It worked great.

If you find a copy CS5 or CS6 then you can always use it. It will not be Cloud Subscription based.

We have an Easel app to import DXF files into Easel that is in beta testing:

Hi guys, I’m pleased to say that I have been working with inventables on the DXF to SVG app. It has been released today for beta testing. Two things you should know: DXF files should be encoded in ANSI 1252 (standard) and file size should be smaller than 2 MB. We are however looking into some ways to improve this. Please reply here if you run into some bugs or any other problems and try to be as specific as you can. Cheers, Jelle

just select the file type you want and make sure you embed images.