I’m hoping somebody has some experience with doing this and can weigh in with my set of tools to get the result that I’m looking for. I was exploring OpenBuild’s projects page and found this really cool dinosaur puzzle that I’d like to carve. The only two file types supplied were a .cnc and .skp file. I don’t have either of the native programs to be able to open these file types. I have access to Autodesk Fusion360 and 3DS Max, so I figured out that I could import the skp file into 3DS and from there I could export it to DXF format. I tried uploading that into Easel, but the canvas was blank. The actual file, when you look at it in Fusion 360, looks like a piece of paper, as in it’s flat, so I assumed that the conversion to DXF didn’t work like I thought it should. So I took it the DXF file into Fusion360 and I can see the various puzzle cutouts.

This is literally my first time doing CAD outside of Easel. Following some youtube videos I was able to figure that I needed to convert the different parts to a mesh and then extrude it, but when I get to the part in Fusion where I’m setting up the milling operation, the “parts” aren’t selectable and running a preview more or less just shows the entire surface getting reduced down to whatever depth I had set the cut at. I guess what I really need are just some good sources on taking a skp file where you just have a flat image with outlines on it and then taking it all the way through to generating the gcode. When I load the DXF file in Inkscape it’s just a white image, nothing else. Adobe Illustrator doesn’t recognize the file as something that can be opened.

For reference, the cnc and skp files attached are what you get from the OpenBuilds website and the attached DXF file is what I got after converting the skp file in 3DS Max to DXF. The picture is what the DXF looks like when you’re looking at it from the top in Fusion.

It has a DXF file choice which should be able to be loaded into a CAD program. Inkscape and AI are not CAD programs. You should be able to load a DXF into Fusion 360. You will then need to convert the drawings to GCode. I use Rhino, not Fusion, so I’m not savvy on what is involved. If I loaded this into Rhino, I’d need to use Meshcam to generate the Gcode. I could load a DXF into Cambam and convert it there too. You’ll have to investigate how to do it in Fusion 360.

Thanks Martin, but loading the DXF into Fusion isn’t the problem. The issue I have is not knowing the steps from opening the DXF file in Fusion to generating the gcode. Like I said, I figured out in Fusion that I needed to take that flat image, turn it into a mesh, and extrude it to the thickness that I needed, and while everything looked like what I needed - I had a 6mm thick extrusion of “parts” - once I went through the manufacturing tab to set up bit, cut depth, etc, I couldn’t feasibly select the different parts to create the cut paths. What I mean is… that 3DS conversion took the outlines and turned them into like 150+ facets for each part, and the tooling path creation had me selecting one facet at a time. Nothing about it seemed like it was what I was supposed to be doing - like I said, first time doing this type of thing - and when I finally did get to the part where it generates the cut paths preview, it just cut the entire length and width of the board, basically doing a surface skim cut. Obviously something didn’t register right. That’s why I’m here… basically hoping somebody knows of some good references or guides for taking a DXF file that looks like a line drawing of parts, turning it into a 3D extrusion, and then going through the steps in Fusion to generate the gcode so that I can import it into Easel for milling.

I just tried to open the dxf file in both Rhino and Cambam and were unsuccessful with both. It said the file has errors, and invalid file version, can’t recover file. I’m using Rhino 5.0, so maybe the format is something that a newer version can handle. I guess I’m at a loss, as I’ve never encountered this before.

Ok, so Rhino also opens the Skp files. It’s 3d, so I selected all of them and duplicated the borders. Rhino has a command called Curves from Objects/duplicate borders. I would imagine you can do the same with fusion360, which is way newer.

Here they are in red. The red lines could be saved as a DXF after deleting the 3d stuff. At this point I would make each part a surface with a command called planar curve. That surface can then be extruded for thickness if one wanted. 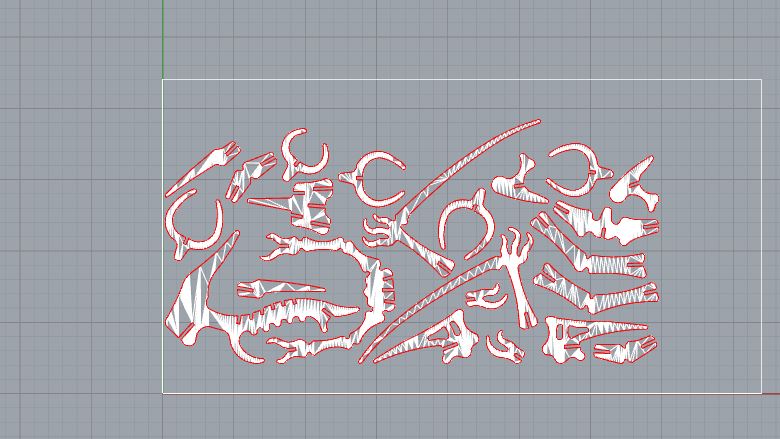 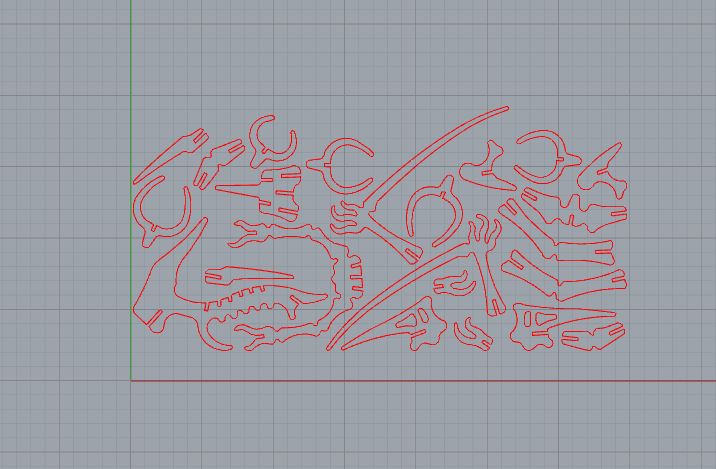 Dinosaur and other animal skeletons! Projects

Thanks Martin! That helped to explain the process! I’ll see how I can apply this process to Fusion later on tonight. One of the issues I had was trying to figure out how to remove the individual facets to ONLY have the outline, like you have in red. This should get me started!

That’s epic and just what I’m looking for! I was hoping to find more models than just the ones on OpenBuilds. Hoping to load my nephew down with some cool Christmas gifts this year. Thanks Erik!