How have people gone about “Effectively” routing the power cord on their DW611 Router?

On my machine, the power cord is zip tied to the X axis drag chain. You have to start tying it on the bottom of the chain (the piece connected to the X carriage) and then follow the chain over to the Y rail. After that, I have it loose connected to my IoT relay. I don’t have any issues with the cord getting in the way and there is plenty of slack.

Mine is running inside the drag chain with the other wires although I’m still in build mode (waiting on X-Controller to ship) so I don’t know if that increases the likelihood of electrical interference.

That caused my Drag Chan to bend and become contorted. :-/
It seems due to the thickness and rigidity of the cord. I tried it a few different ways… No bueno aqui.

How did you get the Plug to fit through the Drag Chain?

Sounds awesome… But, it’s a bit outside of my comfort ability wheelhouse for now.

I know nearly nothing about electrical work, and I’d like to improve that first, to prevent burning down my building.

Thats the IoT relay I use and I believe a lot of others here do too.

That caused my Drag Chan to bend and become contorted. :-/It seems due to the thickness and rigidity of the cord. I tried it a few different ways… No bueno aqui.

Are you sure your drag chain is put on properly? If you don’t have it connected properly, you’ll get bending and sagging even without the router cord attached. The cord actually helps keep the bottom of my drag chain up off the work surface. The top part of the chain should essentially support itself and be straight.

How did you get the Plug to fit through the Drag Chain?

I does. I had multiple false switch errors when the router was on when I accidently ran in limit switch mode.
When homing the router is off so it has not been an issue then.
I have not seen any errors with the steppers while running the router, or at lease none that I have noticed so far.
I have the older smaller drag chain so getting the wire ran is tricky, not much space.
Maybe a second drag chain for the power cord might be a good idea. (If I was running limit switched it would be a must.)

I have the new 2.0 x-Carve and on that drag chain each clip opens up (see instructions) and then after laying the cables down in the C-Shaped channel you just clip each link shut again. No need to push through or to cut cord ends.

Ahhh… that explains a lot with the Drag chain… Perhaps I should have mine upgraded. Regarding assembly, I did it as directed on the instructional videos. 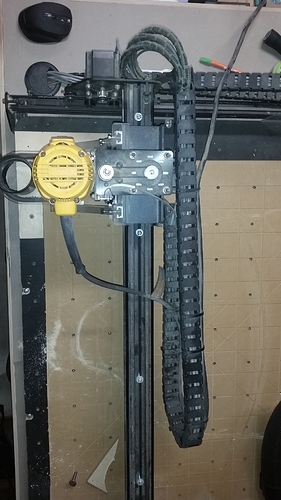 Thank you, Ryan. I truly appreciate you posting that, as it reaffirms that (for whatever reason), my drag chain fails to maintain its rigidity. 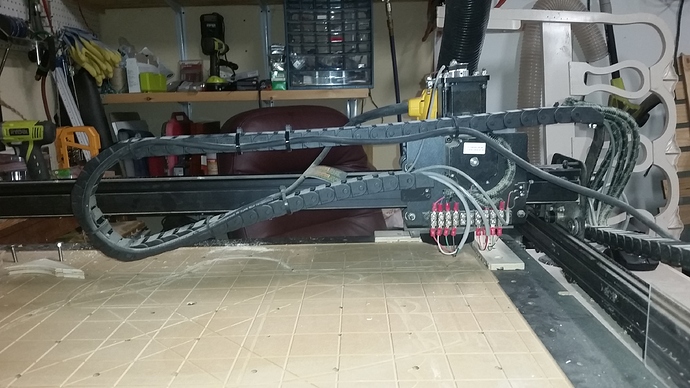 DOES that relay work for the xcontrollers?

I’ve got 2 connected to my Xcontroller. One for the Dewalt and one for my shop vac. 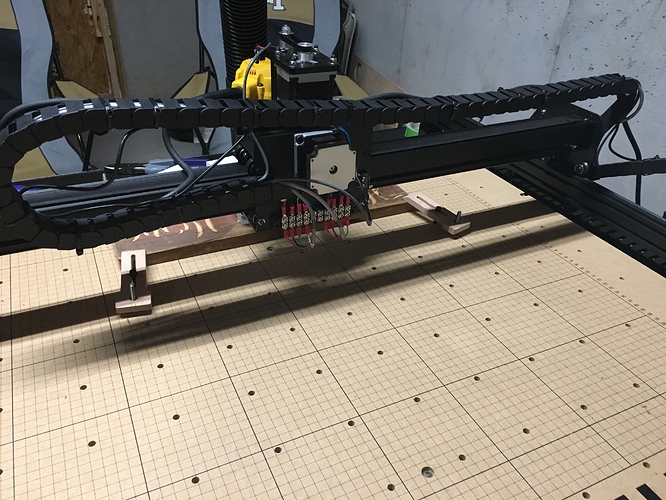 My Xcarve is new so maybe over time it’ll loose the rigidity.

I ran my power cord straight up to the ceiling, then over to an outlet.

I don’t see why it wouldn’t. The x-controller has the openings for the accessories and with the M7/8/9 controls now in Easel it will shut off the router too!

Typically, you don’t use M7 or M8 for the spindle but you use the SPINDLE (PWM) output and again connect to the relay. Using that output, Easel has supported router control for quite awhile.