Found the dewalt 611 web page for replacement parts in case you need to do a rebuild or repair.
http://servicenet.dewalt.com/Products/Detail/DWP611

Not much of a life expectancy. bought new for the machine. sigh

So about how much use did you get from it. And what do you think or know failed.

I have been researching ways to upgrade mine. Such as lower friction brushes and ceramic bearings and some type of air filter at the intake

I’m guessing the brushes since it started dropping carbon powder out on the work area. Tonight it started crackling and sparking and I shut it off. It would not turn back on.

Found this and ordered. 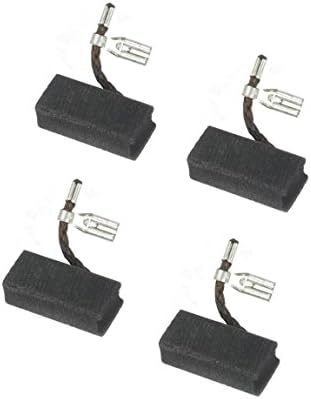 The numbers I am seeing is 100-180 hours tops on a set of brushes. I’ll be keeping a stock of these around so I don’t end up idle.

That sounds about rite for the life span on brushes. The harbor freight trim router i just replaced got about 153 hours on it brushes were getting bad but the bearings went first.

If I get 2 months out of a set of brushes, I can deal with it. $5/ month for spindle maintenance is fine. When I tear this one down, I’ll look for other preventives I can do.

Just got back from Lowe’s with another router. I’ll have them in rotation. Otherwise I’ll be standing at my X-Carve this weekend making motor noises and pretending I’m cutting something.

Mine just died after about 2 months. Same thing, guessing the brushes. I’ll order some new ones, but in the mean time, I’m heading to lowes to buy a replacement router!

Same deal here, the router died after around 180 hours of use. Took the router apart and the brushes were totally use up. Also, the commutators were pretty heavy pitted. My machine was on loan to our MakerSpace and they ran it beyond the life of the brushes which caused pitting. Lowes offered to replace the router, so I went that route. This time around, I decided to install an hours meter on the router, so I can actually track the usage of the router. I want to make sure I proactively replace the brushes before it gets to the point of arching. I wonder how may sets of brushes you can replace before the commutators are worn out. Oh, and this time around, I got a 3 year replacement warranty!!

Do you mind sharing the Hour Meter that you are using?

This is the one I ended up with. I would have loved to find one with higher resolution, and re-settable, but they seems to be much more expensive!! I opened a ticket with GRBL asking to have some kind of hours meter added to the firmware. He shot down the idea, which I do not agree with. I currently have a home made 3D printer, and have modified the firmware to track the number of minuted the system, headbed and extruder are on. It is not really hard, you just have to intercept the commands that turn the spindle on and off, and store the ticks in the EE prom on the ATMEL chip. You could have a GCODE command to reset and recall the current counters. Once I get my X-Controller, I plan on adding this feature to the firmware and will share with anyone else who wants it.

Are you guys having good luck with replacing the brushes? My third router is going out (I heard the ticking of arcing this morning.) I’m hoping I can get the rest of the weekend out of, but I may have to run to Lowes, I can’t be down at all I’m so far behind on Easter orders.

3rd 611? Huh. I still have my original from 2 yrs ago. It has hundreds if not thousands of hours on it. I wonder if this a build quality issue with the newer models? Interesting.

Is anyone else seeing brushes wearing causing easel to end jobs prematurely?

Mine has been running since July with no issues with the brushes. Almost all of my cuts have been with the router speed set to 1 or 2. I think running it this long with everything on full speed and it would have been different with me.

Yeah I learned with my first router not to run it full bore. I never go above 2 now, but I run it 30-40 hours a week.

I was hoping I could make it through the weekend, but the brushes seem to be interefering with the Arduino, because my jobs keep quitting. So I guess I’m off to lowes, which blows because they are cheaper on Amazon, but I can’t wait until Monday, too many orders waiting.

If your USB cable or connector is loose or bad, that can cause the controller to shut everything down.