STILL waiting for my Elaire collet. I ordered it a week ago and got a shipping notice this morning

The holiday must have slowed the process. I ordered collets from them on 11/16. They shipped from MI on 11/17 and I received them on 11/19 in south GA. They appear to be good quality collets!

Sitting there… waiting for its collet. The Makita is just despertate to try its hand at some aluminum. 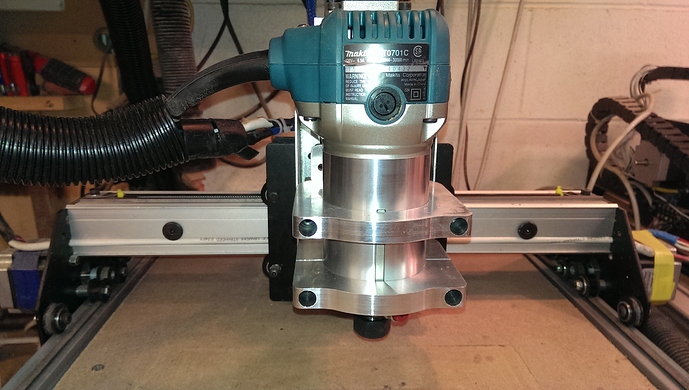 Just ordered my replacement from them!

Any update on the really exciting things you just cant tell us yet?

Just finished wiring up my superpid tonight. I also powered it off the X-carve’s power supply since that way a common ground is assured. Also the superPID itself draws little power, so wasn’t worried.

For folks asking why the PID controller versus the built in speed controller of the router. The built in speed controller does not use feedback to assure that the bit is going the requested speed. Say you are chewing through a knot in the wood then it will slow down, and the built in triac has no idea this has occurred. So instead of cutting at 10000rpm you are cutting at 8000, and it is unpredictable. The PID controller uses feedback to sense when the bit is slowing down and applies more/less power to keep the speed constant. It’s not that it is “more accurate” that matters as much (I mean 10000 vs 9800 unlikely to matter if it was constant) it is that it is constant speed regardless of load.

im pretty sure the dwp611 keeps rpms constant under load.

The description provided for the 611 says it does use feedback to keep RPM constant.

From the Dewalt description:

The DWP611 compact router features a 1-1/4 peak HP motor that delivers significantly more power than competitors’ models to help you be as productive as possible. The variable speed control helps you to better manage the tool and determine the speed that is best suited for the application at hand. A low, contoured grip that is close to the work surface also contributes to an excellent level of control–providing both precision and productivity on the job site. The soft starting motor features full time electronic feedback that maintains motor speed through the cut. An adjustment ring enables controlled bit depth changes to within 1/64-inch.

However it later uses a speed range labeled “no load speed” which is a little weird statement if they have full closed loop speed control which is able to “maintain the speed through the cut”… I have to say I disassembled it to put in the superPID sensor, and I didn’t see any rotary encoders or other sensors, so not sure if it senses something electrical through the brushes or whatever, but didn’t seem to have a separate encoder/sensor array.

There a several ways to measure speed besides optically.
Hall effect sensors, current, even EMF apparently.
I agree with what others are saying, and Dewalt’s marketing, that there is speed control with proper feedback built into the router.
Both Dewalt and SuperPID are probably using PID control: Proportional Integral Derivative.
Formula differences will result in variances such as overshooting, response time, etc…
Unfortunately without measuring or more information its just guessing on both sides.

Anyone know the thread size for the auxiliary holes along the left side of the 611 mount? I assume there M3, but I hoped to verify before I order some screws.

Here is the PDF.
Plus you can find ALL the CAD models and PDF’s in the same area.

sweet many thanks form switzerland ^^

I have a 1000mm X-Carve with the original spindle. I also have a Colt mount. I thought I saw mentioned that the Colt mount would work for the Dewalt 611. Is that advisable, or should I just get the 611 mount and be done with it?

How come you can access the spindle lock? My mount is such that the spindle lock is covered and I have to entirely remove the 611 from the mount every time I want to change the bit. Not good.

Just lower your router to where the spindle lock is below the bottom of the mount… Or grab your dremel and carve a hole to make room for you to press the button at the height you want.

Hmm. My 611 won’t go down as far as yours seems to. Which means the spindle lock is covered by the mount.

Did you remove the round plastic thing (don’t know its name) at the top of the router to allow it to go that deep?

I’ll take a look tonight and see if that’s possible.

There’s no way my 611 will go down any further. Wonder if I’ve got the correct mount?

Can you post a picture of how it is in the mount? Mine has to go in rotated a bit to clear the top of the Z-Axis.

That’s exactly what I was trying to do

Once I figure out how from an iPhone.