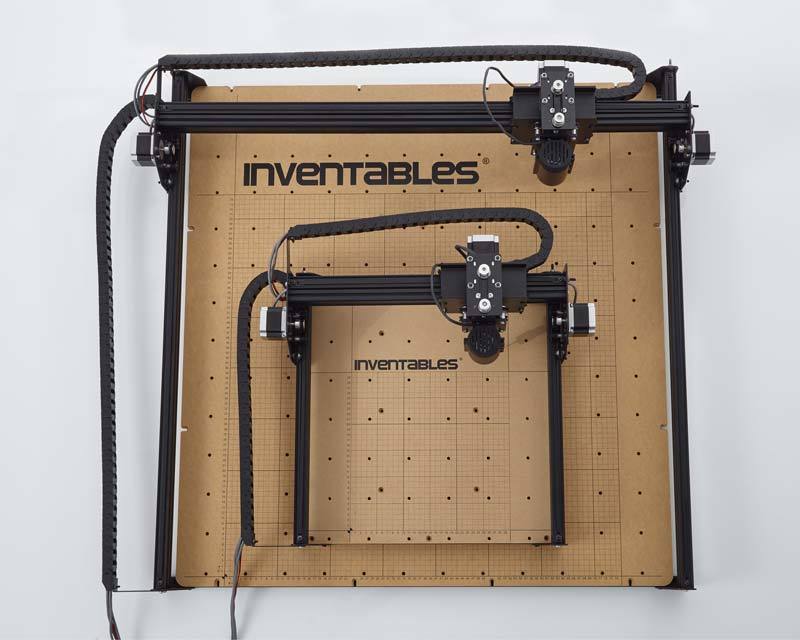 This is perfectly fine as long as there is plenty of clearance on the back and left of the machine to accomodate for the chain’s max curving as it moves far left and far front.

In case of limited workspace, one could possibly preserve the same footprint by changing the drag chain orientation to parallel to the wasteboard.

I have seen people doing this here and it caught my eye in the last blog update about the X-Controller. 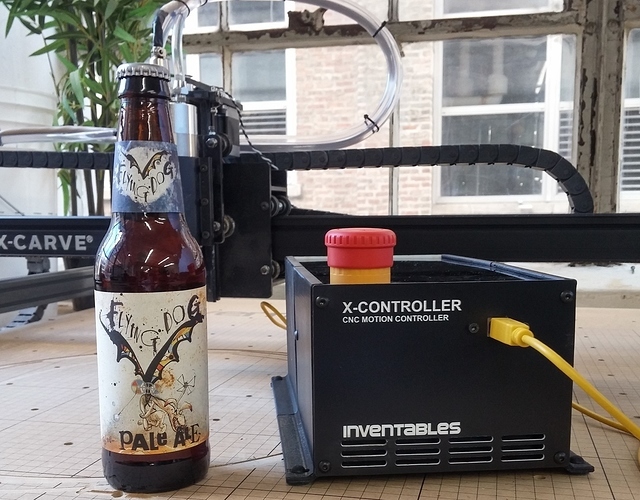 I guess one way to do it would be to drill the existing L-plates for the fixed side of the drag chains and come up with some sort of extension plate for the moving side.

My question is: could we use standard hardware offered here to come up with the same solution?

I am replying to myself

After researching a little bit, it seems that the top image (which btw is shown in X-Carve’s main page ) showing the 500mm X-Carve inside the 1000m version is outdated, in the sense that only the 500mm version uses a the drag chain “horizontally”. The 1000m version includes the hardware to set it up “vertically”.

The 1000m version X-axis rail is extended and allows for this (the 500mm version does not). 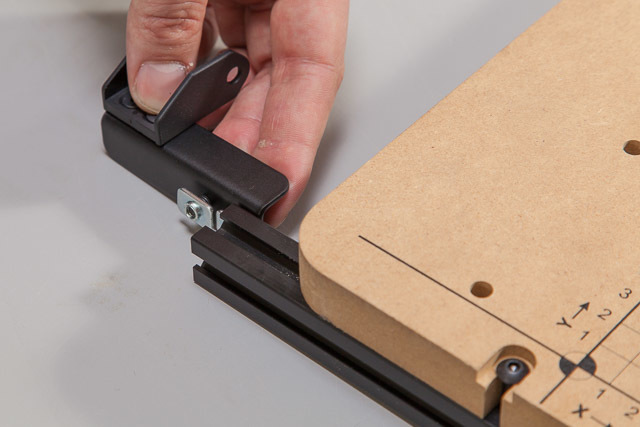 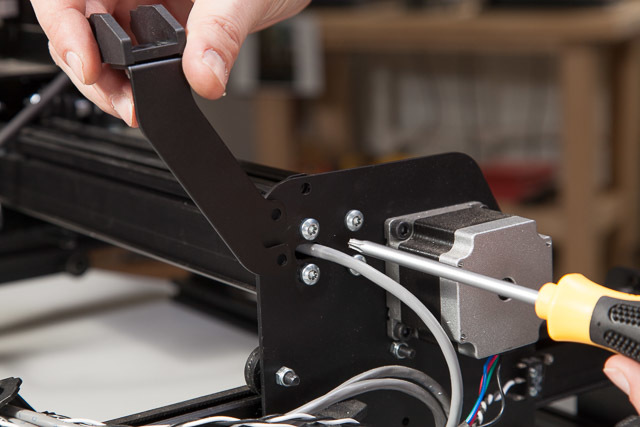 And finally the orientation change on the other end of the chain is taken care by another small plate. I did not find an image in the assembly, but it is shown in this CAD file. The moving plate is part 14059. Part 14058 is the fixed plate shown above.

I will therefore rephrase my original question to:

I haven’t seen them listed for sale yet, but I just finished making one of both of those out of scrap metal. With some patience you could make your own. There is a 3rd bracket too that needs made/purchased too. It looks a bit more “normal”. Also, you don’t need two of each, just one. Unless you’ve got two X-Carve machines, then you need two.

I am glad to see I am not the only one getting paranoid by such a small thing.

Here’s how I visualize the four parts:

You are right, it must be fairly easy to DIY or get plates from a hardware store and re-drill, but I doubt they would be anodized black

You’ll have to look at the instructions. Ignore some of the pics - they’re wrong as you found out. And there are some discrepancies between the videos and the written instructions, you’ll have to watch close to see which are for the 500 and which are for the 1000.
I’m not sure I have it figured out yet, but I think at least for the X axis (moving gantry) there is only one and that is the curved one (14059).
In any case, the way I’ve been reading it, for the X gantry: the long curved bracket 14059 goes on the end of gantry on the side where the spindle wires come out. One end of the drag chain connects to that bracket. The other end of the drag chain connects directly to the X-carriage assembly where the spindle is. It snaps into a drag chain link that is mounted there, no bracket. It isn’t mentioned in the drag-chain installation, I think that one is up in the instructions for the X-carriage.

OK, I’ve read the instructions a few times and watched all the videos - I don’t see where the other brackets would go - and I’ve got the 1000 kit coming. I guess I’ll just skip the drag-chain completely then and let the wires hang free rather than try and figure out what’s what.

You are right, 14059’s are nowhere to be seen in the assembly instructions. You can only see them in the CAD files.

In 1000mm it is included, in 500mm it has to be sourced independently. Inventables, can this be done?

(Apparently a second 14058, as I suggested previously fixes the orientation but does not align properly)

The 14059s are part of the assembly of the left Y plate and the X carriage for the 1000mm X-Carve and both are present in the pictures and the instruction text.

i have the 1000mm version and my drag chain kept hitting my wasteboard… sooooooo i took a piece of 1" aluminum angle bar and made a support. its about 4-5in long and just mounts to the Z axis bracket for the drag chain. its abit thicker so i had to use different bolts that were longer but it gives it just enough support to stay well above the waste board.

I just got a confirmation that drag chain orientation change is possible on the 500mm X-Carve, so I thought to share the info in this thread.

It seems that Inventables does not currently stock M4 nuts & bolts, but these can be easily found in a hardware store.

I now wonder how come they did not choose to go with vertical mounting on the 500mm X-Carve to begin with. The footprint gain is significant.

I’m sure it keeps the cost down for them. They only have to ship two identical brackets, compared to the 1000mm xcarve. My only guess besides reduced cost is that the 500mm xcarve may experience more bending stress in the wires because of how compact the drag chain is for the smaller machine. I’m not sure if that’s the case, but it’s all I can think of.

I also wonder why the wires all come to the front of the machine. I ended up printing new brackets and mounting my drag chains vertically and the y-axis drag chain so that the wires go to the back. I think it looks much better now.

I want to have the wires go out the back as well, can you explain how you did it, maybe share the files…I’ll find someone to print whatever I need. Can you show a picture?

At one point I was successful at using the existing brackets to run them the other way. 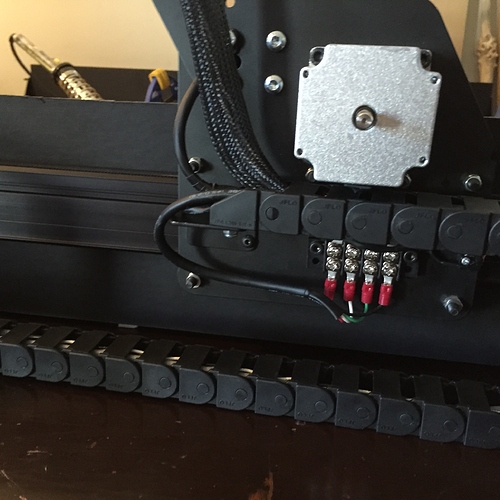 Mounted the other end upside down and the drag chain to the normally “underside”. I do have mine raised slightly so there was clearance for the nuts and bolts.

I’ll have some time this weekend, I’ll take a look at it. I bought 2 new makerslides and tapped the ends this evening, I will add the steel bar and my new electronics enclosure so I will look at reversing the drag chain as well.

If you have a way to do it, you could put more holes in it to turn the bracket around…

Hi @BartDring or @Zach_Kaplan or anyone at Inventables that does the engineering on X-Carve. This applies to the 1000mm x 1000mm version. In browsing other discussions on the drag chain brackets and also others talking about mounting the side drag chain so that it will feed the wires to the rear of the machine, I thought to myself, "hmmm... I wonder". When I got to the step in assembling the X-Carve drag chain, I thought about a way to do just that and ran into one main hang-up... the lower …

Btw, what you suggest in the other thread (drilling “mirror” wholes on the 30586-02) is simple and clever.

That is correct. It is far enough away from the X-plate to allow for wires to be between the drag chain and the plate as well as not interfere with the limit switch.

I’d take more pictures, but as it turns out, running the cables to the front worked better for my setup, so I changed back to the front version. My X-Controller sits nicely under the table and the cabled feed directly down through a hole in the table.

I reversed mine and the wires come out the back of the machine now.